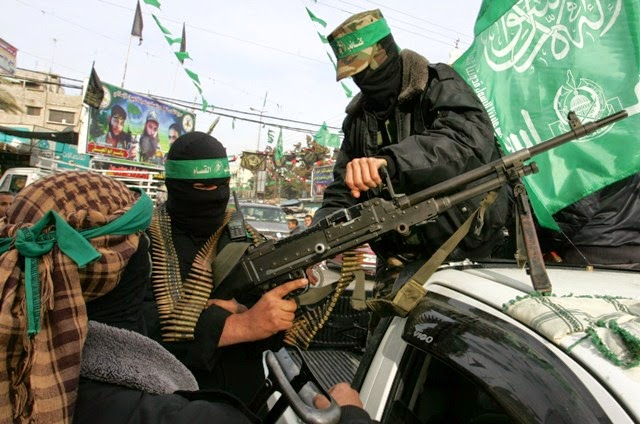 Stealing words from Dan Gordon over at Theo Spark, contrary to the perception of some, that the core reason behind this conflict is Israel’s occupation of lands conquered in the defensive war of 1967, Hamas could not, and does not, give a tinker’s damn about “ Occupied territory” . This is so because Hamas regards ANY territory on which there is a sovereign Jewish state as “occupied territory”. Moreover, Hamas believes that any such Jewish state has no right to exist.

Indeed, Hamas believes it is duty bound, by both religious and political ideology, to destroy such a state, on its road to establishing the kind of Caliphate which ISIS is in the process of making a reality. According to both of their ideologies and religious beliefs, everything from the Persian Gulf to Spain, is, by virtue of once having been ruled by Muslims, “occupied territory”, which they mean to liberate, by any means possible.

To Hamas, it would not matter if Israel were Christian, Buddhist, Scientologist or Mormon. It is the same mentality that today sees the destruction by ISIS of an 1800 year old church in Mosul.

Hamas are not the plucky underdog freedom fighters that the Left so loves. They are dangerous, corrupt, Islamic fanatics who, like suicide bombers, do not care who they kill or how. They are the enemy of every liberal and progressive value you can name.

Ultimately the victims in all this are Gazans who are held prisoner, not by Israel, but by Hamas. Bring me an argument that Israel is using heavy handed and tactically unwise methods in fighting them, and I am open to a discussion. But there is no middle ground on Hamas. Either you oppose religious fanatics who will slaughter anyone who is different to them (and anyone who gets in their way) - or you don't. If not, you are not fit to stand as a Member of Parliament.
Posted by Pete North at 05:51