This right here is what's wrong with foreign aid... 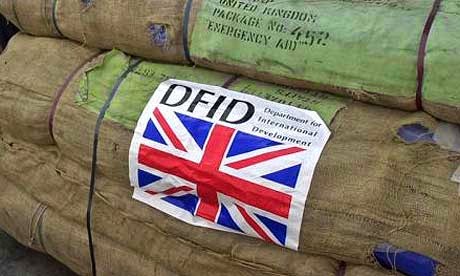 The trouble with foreign aid is is that nobody in mainstream politics seems to grasp what it is for. Paul Nuttall of Ukip thinks it shouldn't be used for international development, and instead be used for famine relief efforts "to help starving kids in Africa", and Nigel Farage "thinks" it should be spent on a domestic civil defence force to do god-knows-what in the infrequent event of a flood. But it isn't just the Ukipists with a stunted worldview, since we also get this from Lib Dem MP, Michael Moore.


"Having given serious consideration to a couple of possibilities, I have now decided to introduce a Bill to make good on a long-standing Liberal Democrat commitment about international development: to create a legal requirement for the UK government to meet the UN’s target of contributing 0.7% of our Gross National Income each year as Official Development Assistance to developing countries."

This is wristband politics. Our politicians simply do not see that foreign aid is primarily a part of the diplomatic toolbox. It can be highly effective when applied to a strategic end in the national interest, but instead they see our role in the world as an international poverty relief agency, signing up to arbitrary quotas devised by transnational NGOs; they who think that global poverty is somehow a consequence of the West existing, and that we have a duty educate the barbarians and free them of their medieval attitudes. And, of course, salve our collective guilt for causing climate change.

You will not find a more glowing example of Western stupidity than the effort to rebuild Afghanistan, where Western NGO’s with their "liberal" Western values sought to change the social orthodoxies overnight. They did this by installing schools, educating women and taking children off the land. All that succeeded in doing was to piss off an awful lot of the menfolk enough for them to take up arms against us. One of the more egregious examples of British stupidity was DfIDs Women only theme-park: An actual Ferris wheel in the middle of the desert. No really!  But no roads, bridges or airports to speak of, and no infrastructure to maintain them.

Meanwhile British efforts in India extend only as far as building “Fair Trade” plantations and forcing rural farmers to reduce their Co2 emissions by converting their paraffin cookers to solar energy. The lunatics have taken over the asylum. Our foreign policy is dictated by the idiotic and childish fixations of unaccountable climate-change obsessed international NGOs who put gender equality issues ahead of the basic need to feed people.

But then on the other hand, I have heard Ukipists decry the use of foreign and to fund a Ghanian space programme, the sort of aid that promoted Godfrey Bloom's famous "Bongo-Bongo Land" remarks. Were Ukip not so anti-intellectual they would see that developing a stable nation with a functioning education system and a growing innovation based industry is massively in our own interests, not least to reduce migratory pressures. And as we have already remarked, something as obscure as a new sewer system for Ankara can be just the diplomatic nudge to get Turkey to take more refugees from Syria. Who knew?

Developing other countries who can do us a favour is not a bad idea. But our foreign aid policy is straddling three horses: the UN/Oxfam/Comic Relief agenda, the EU imperialist agenda, and whatever passes for our own misguided foreign policy. Not until we get back in the habit of putting the national interest first rather than touchy-feely, feel-good sentimental fluff that makes us feel better will we stop firehosing money around the globe to no meaningful effect.
Posted by Pete North at 11:05