Every bomb is a political bomb 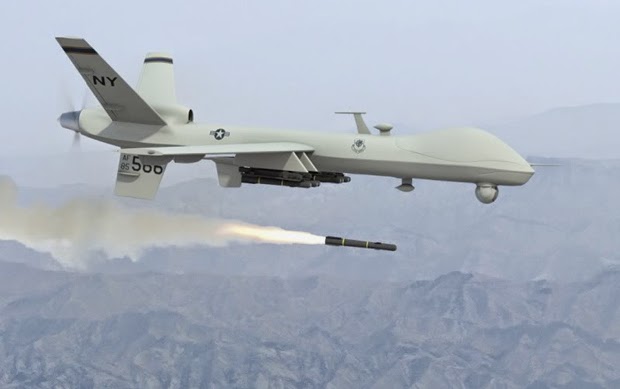 "Every bomb is a political bomb" said General Michael E. Ryan during Operation Deliberate Force, the NATO air operation in Bosnia. Truer words were never spoken. Nuclear or not, every bomb has fallout. This is so demonstrated in yet another childs funeral in Gaza today. The whys and the wherefores do not permeate the media. Media attention is focused on the fact that another innocent lies dead in an ever climbing tally.

I would not dispute Brendan O'Neill's conclusion that criticism of Israeli military action is wildly unhinged, spilling into anti-semitism, however I feel it necessary to examine some of the lazy generalisations he (and others) make about Western interventions. For instance he says:


Anyone possessed of a critical faculty must at some point have wondered why there’s such a double standard in relation to Israeli militarism, why missiles fired by the Jewish State are apparently more worthy of condemnation than missiles fired by Washington, London, Paris, the Turks, Assad, or just about anyone else on Earth. Parisians who have generally given a Gallic shrug as French troops have basically retaken Francophone Africa, stamping their boots everywhere from the Central African Republic to Mali to Cote d’Ivoire over the past two years, turned out in their thousands at the weekend to condemn Israeli imperialism and barbarism.

Looking at this, Mali is an important asset to the the West, Europe especially, in that it is potentially agriculturally self-sufficient, mineral rich and as close to a democracy as West Africa gets. In terms of democratic structures, it is more democratic than Great Britain. An insurgency causing Mali to fail as a state would be a disaster. Since it is a former French colonial interest, as is Algeria, if it fails, then the EU has an even bigger immigration problem than it does now. It is in France's interests, and consequently our interests, (as well as that of Mali) to not let it fail as a state, likely resulting in a Mugabe-esque regime that inevitably destroys the economy and anything else it touches.

French military action had specific, achievable objectives which can be said to be successful. Air strikes were limited to weapons caches and fuel stockpiles and civilian casualties were kept to a minimum. There is a national interest at stake, there were clear and achievable military objectives and consent to carry them out. Where is the problem?


"Americans who didn’t create much fuss last month when the Obama administration announced the resumption of its drone attacks in Pakistan gathered at the Israeli Embassy in Washington to yell about Israeli murder. (Incredibly, they did this just a day after a US drone attack, the 375th such attack in 10 years, killed at least six people in Pakistan. But hey, Obama-led militarism isn’t as bad as Israeli militarism, and dead Pakistanis, unlike dead Palestinians, don’t deserve to have their photos, names and ages published by the concerned liberals of Twitter.)

As it happens, rather a lot of Americans do make a fuss and anti-drone warfare protests are cottage industry among the American right on social media, and will be until there is a Republican president, when both camps will simultaneously switch sides. The Left like drones for now, but wait until a right-wing president uses them in precisely the same operation.

But the point here is that drone strikes are targeted assassinations where every last effort is made to reduce casualties, and they do operate with the consent of Pakistan and Yemen. That is why they do not attract much protest. They have bagged us quite a few important nasties, who would otherwise be out of reach, with minimal collateral damage. The record for such casualties is improving all the time as the technology and intelligence procedures develop. Where you see a mistake it is almost always down to faulty intelligence, but these incidents result in lengthy enquiries and the process is refined all the time. Meanwhile, writes Brendan;


hundreds of very angry Brits gathered at the Israeli Embassy in London, bringing traffic to a standstill, clambering on to buses, yelling about murder and savagery, in furious, colourful scenes that were notable by their absence three years ago when Britain sent planes to pummel Libya.

Except British "planes" did not pummel Libya. Here follows an extract of a NATO statement.


This was the first air campaign in history where only precision-guided munitions were used. NATO approached each individual targeting decision with extraordinary caution. We had solid intelligence and a very strict target selection process. The day of the week, time of day or night, or even the direction of attack were carefully considered to minimise any risk of civilian casualties. We conducted 9,700 strike sorties and dropped over 7,700 precision bombs, but no target was approved or struck if we had any reason to believe that civilians would be at risk. Whenever possible, we used the weapon with the smallest yield to avoid unnecessary harm or damage. In some cases, as many as 50 hours of airborne video observation was conducted and analysed before a strike was authorised. Hundreds of possible strikes were aborted at the last moment due to the perceived possibility of a civilian presence.

In Libya, we had a strategic objective to ensure Gadafi did not execute a scorched earth policy resulting in massacres. You can argue whether the regime that follows will be worse or not but that was our objective, and in over 10,000 sorties launched by NATO there were only 72 civilian casualties (according to HRW). Whether such a campaign is in the national interest is debatable but as a military operation, billions were spent to avoid civilian casualties and no large scale munitions were ever dropped in built up areas. 72 casualties is bad, but compared to what? A massacre by the regime? Syria is a pretty good example of how non-intervention pans out. How does that look to you?

Since the first Gulf war the majority of funding and intellectual investment in the Western defence industry has been geared toward casualty reduction. Operation Deliberate Force over Bosnia was distinguished by an unprecedented reliance on precision weapons, which comprised 708 of the 1070 heavy weapons delivered against the Serb Republic. Thus, 69% of the weapons dropped during Deliberate Force were precision, compared to 8% during the Gulf War.

Of course none of these nuances are considered by those who criticise Israel even for a moment, and Brendan is right to highlight the hypocrisy. If their facile half-baked assessment of what is going on were applied elsewhere, it would necessarily demand the same hyperventilation. But that is not to say there is not a case for Israel to answer.

In Gaza, where civilians are used as human shields, the military objective of Hamas is to provoke an Israeli offensive that will work in their favour. Israel does use precision guided small yield weapons but, evidently, it is still using unnecessarily large ones in built up areas - for purposes that escape me. In this case, it doesn't take very long to clock up a disproportionate body count. This is a gift to Hamas. Collateral damage is a propaganda commodity for Hamas so it wins every time. Israel is giving its enemy exactly what they want, plus it has the added bonus (for Hamas) of bringing it back in the news now that it's sponsors in Egypt and Iran have abandoned it. Hamas have never been weaker and they'll now come out of it stronger. There is no strategic advantage in it.

Looking at the body count thus far, were it really a case of "#GazaUnderAttack" then my first observation would be that Israel isn't very good at it. If this really is genocide, then it is the most incompetent genocide of all time, given their military might - and it doesn't really stand up that Israel's attacks are indiscriminate. However the technology for maximum casualty reduction does exist, and is within the means of Israel, yet it manifestly refuses to use it. If an AC-130 Hercules gunship can fire a 20mm round into a car with perfect accuracy, then why not airborne sniper capability with an air mounted Barrett .50?

With the munitions deployed presently, whatever Israel does, however "meticulous" it is, the result will always be the same: black smoke clouds on the front pages and hundreds, sometimes thousands, of dead Gazans, mostly innocent, then back to the same stalemate - just waiting for the next trigger incident. What is served by this?

In Western interventions there is an emerging trend of fewer and fewer collateral casualties but the action is in tandem with specific military objectives. While I don't believe Israel is entirely careless in its actions, I don't believe they have been as meticulous as they could be by a long shot. But ultimately the question is; what is Israel's military objective? If it is to provoke an uprising against Hamas then it won't work. We know this because we have been here before. It doesn't work and the lies will always have an easier time in the media than the truth.

When Iron Dome and similar associated technologies could provide a 100% effective shield, where is the value in feeding the enemy propaganda machine and turning it into an international incident? None. So here we have Israel needlessly shooting itself in the foot, to no discernible effect, squandering good will among supporters as people tire of seeing this same drama repeat itself. It seems Israel is not showing any greater foreign policy wisdom than the West. This action smacks of "something must be done" to satisfy the domestic demand for action, but the outcomes are wholly counter-productive.

As I have repeatedly said, the propaganda war is every bit as important as the shooting war. This offensive accomplishes nothing. Israel can either contain it through intelligent defence policies or invade and colonise, but since there is no political will for the latter (and certainly not without increasing (global) terrorism), Israel needs a bit of a rethink in terms of its approach. What is it they say about trying the same thing over and over and expecting different results?

It's difficult to cheer on Israel as it embarks upon yet another pointless slaughter for no strategic gain with no measurable effect on domestic security. I could be more charitable if I could see an achievable military objective here but to me it looks entirely futile.
Posted by Pete North at 12:06