Can everyone please stop posting photos of dead Palestinian children all over the internet? asks Brendan O'Neill in The Telegraph. That would be nice wouldn't it? But it isn't going to happen. This is the age asymmetric warfare, where the propaganda war is every bit as important as the shooting war. Hezbollah knows this and so does Hamas.

He will remember in 2006 the botched ground invasion of Southern Lebanon in 2006, where Israeli forces were bogged down for days, to the point where the small (but mounting) numbers of IDF casualties very quickly turned domestic public opinion against further military action.

He will also remember the Qana scandal as "humanitarian worker", Salam Dahler, was caught red handed posing the bodies of dead children in a grotesque photo-shoot for our media vultures. He will also recall the Guardian, the Independent and the Telegraph using those same pictures on their front pages.

This is the event that turned the tide of international diplomacy against Israel in 2006. Hezbollah had no chance of winning the battle, but won the war hands down by using Israel's ignorance of the media against it. The obvious lesson being that if you create the bodies, one way or another, they will find a home on the internet, and our "professional" media will show little, if any, discretion in which ones they use.

In Basra, Iraq, we saw Iraqis retreat into ethnic tribal groups largely as a matter of safety because occupying forces, namely the British, could not provide it. This is a lot to do with the fact British forces were penned up in barracks because every time they went out in a Snatch Land Rover, the front page the next day would feature two flag draped coffins, souring the public mood at home. It is through the force of media that the insurgency gained supremacy, not through force of arms.

These are own goals the West has manifestly failed to learn from. The very picture the Telegraph uses to illustrate Brendan's words is the result of a 155mm self-propelled gun. Did no-one in the IDF chain of command think this might not be a good idea?

It doesn't matter that a great many of the deaths in operation Cast Lead were males of combat age. For obvious reasons you can't get a good reading on the actual ratio of civilian casualties, but the reality is; all most people see is a large death toll with very few on the Israeli side. It's daft, but that's how people are. The higher the Gazan death toll, the happier Hamas is, as it plays the victim card to survive.

So Israel has to acknowledge that it has to fight and win a propaganda war, thus the lower the body count the better. To that end, containment is the more sensible approach. Whatever the moral case, filling up the internet with pictures of dead kids and big explosions does not work in Israel's favour. Wars are now fought through the media and that is a fact we cannot ignore.

Israel has to play it smart. Iron Dome has proven semi-effective as a means of containment, but it isn't the whole of the solution. The IDF has misrepresented how effective Iron Dome has been because the procurement was every bit as much a political procurement as Eurofighter and F35. Politics got in the way of what was needed and there was no telling them they were wasting their money. They were as deaf to good advice as our own MoD.

But that is not to say containment technology does not exist. Iron Dome is a good primary defence system, but it has to be used as part of a layered defence network which can be augmented with high mobility Goalkeeper/C-RAM units. 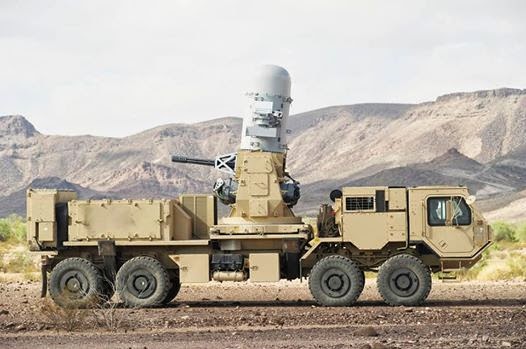 This is 20 year old technology at least which could be upgraded to help triangulate the launch point of incoming rockets. That data can then feed to UAVs which can then task an Autonomous Rotorcraft Sniper System (sniper helicopter drone). Further to this, you can have something like a CN-235 gunship orbiting with very small yield shaped charge warheads, ready to zap the nasties as they crawl out of their holes. Such an approach runs on the ethos of "if you try, you'll die".


At the moment we are seeing "precision guided" artillery, which sure hits the spot, but with warheads that have shrapnel radius's not suitable for urban counter insurgency war. These are dead baby makers. Something like a GBU-44/B Viper-E with a smaller warhead is more appropriate, but even then is still going to produce media friendly black smoke clouds that fill a front page. But there are solutions out there.

Much of it is proven technology, but what is lacking is the joined up thinking to put it all together. This is the smarter option because low grade containment isn't really newsworthy and saves Israel having to engage in unpopular incursions that don't really achieve anything and cost an awful lot.

The challenge for Israel is to combat the David versus Goliath narrative. These blundering set-piece military incursions do nothing toward that end and it is wholly counter-productive. What could be managed as a low-key policing operation perennially sprawls into media circus wars where Israel seems to willfully ignore the lessons of before. Were I cynical I might wonder if Israel were staging a media narrative of its own, directed at the US. If that is the case then damn them to hell.

I don't disagree with Brendan that the left-wing tendency for pious narcissism is what drives the outrage, and dead baby pictures are the pornography that feeds it - but asking nicely if people would kindly stop being dickheads is a bit much to ask. Thus Israel has to recognise the reality in which it must operate.

There isn't a conventional military solution here. It has been tried many times and it has failed many times. The technology exists to do better, and much of it Israeli technology, so isn't it about time they put away their tanks and self-propelled guns and started thinking about an intelligent way out of this mess - and one more befitting this century?
Posted by Pete North at 13:12