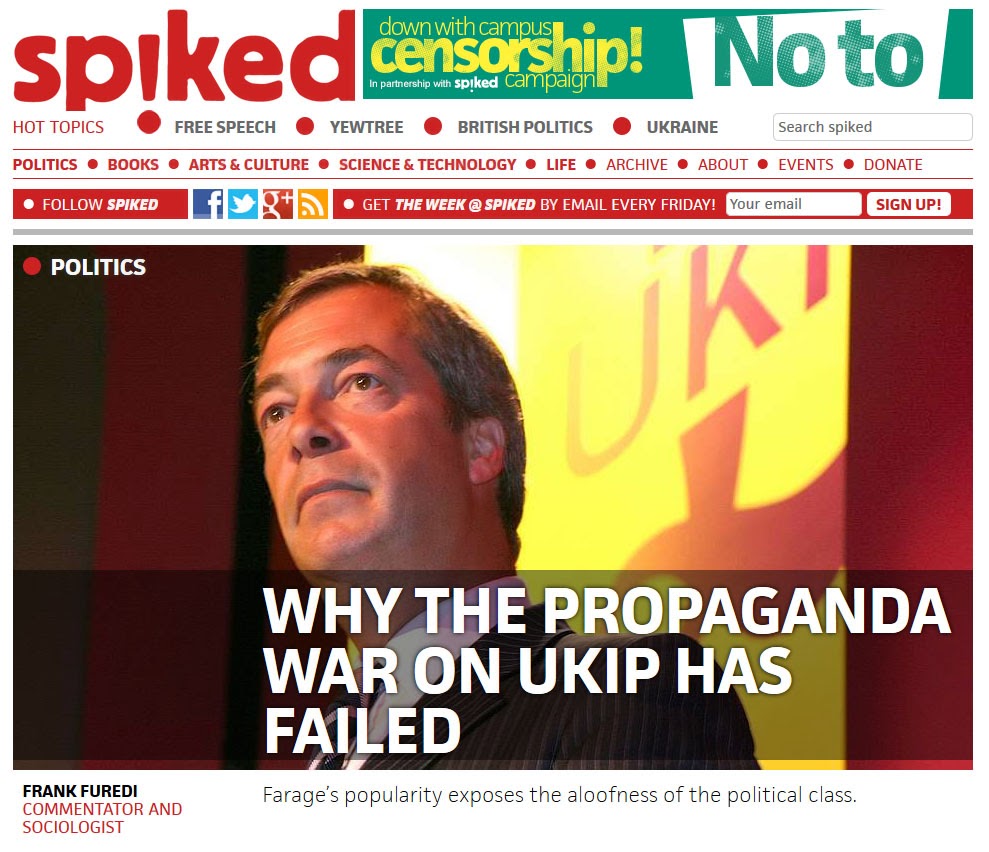 Patrick Hayes of Spiked makes the point that following the demise of Britain’s far-right, UKIP has become the great white hope of anti-fascist groups.  They need to manufacture a popular folk demon in order to survive.  I don't dispute that at all.  But as ever, Ukip have been keen to give them a helping hand.  Hayes remarks that "Given that UKIP has existed since 1991, it’s strange that it’s taken over two decades for these groups to unmask UKIP’s latent fascism."

That's because such a charge would never stick on Ukip before, but since Farage by his own admission has pursued the BNP vote and resorted to cheap populism, he has given the likes of UAF a foothold. Because it has attracted the BNP vote, it brought a lot of the racist rubbish with it. There is no hiding that.

Nothing about Ukip is overtly racist, but rather than promoting solid arguments they have resorted to fact-free fear-mongering and gross distortions - designed to tap into that working class resentment which the BNP fed off. It comes as no great surprise to me as an early era (now ex) Ukip member that Ukip is now stuffed to the gunwales with unhinged mouth-foamers and anti-islam campaigners.

Then look in the media comments at the robot-like behaviour of Ukip tribalists. These are not rational people we are dealing with here. All party tribalists of whatever stripe are always a bit demented but Ukippers scare even eurosceptics in their total derangement. Add to that the fact that Ukip is less a party than it is a personality cult and what you have has more than a few echoes of a fascist party.

That is not to say that UAF and Hope Not Hate are not paranoid lunatics seeing fascism everywhere and manufacturing outrage in a desperate struggle for relevance in a post-BNP UK, but Ukip does have more than a coincidental share of thoroughly obnoxious people with thoroughly obnoxious ideas - and that is entirely a consequence of Nigel Farage pitching the party at these people.

Ukip may not be the BNP, but they certainly are the BNP-lite. Quite why the establishment has decided to raise the spectre of racism rather than attacking Ukip's feeble arguments I really don't know, because they are actually more vulnerable on their amateur-hour policies and ridiculous little-englander reactionary campaigning. It might not be racist, but it's still pretty ugly. This is also a party that wants to take us out of the EU but has still not published a detailed policy on exactly how we would do that.

That Ukip are now the target of UAF et al, is purely an own goal scored by Farage. It might have given them a short term bounce, but there is an electoral glass ceiling in this kind of grubby populism and that is why Ukip will now vanish almost as fast as the BNP did. Meanwhile, we are still no closer to leaving the EU. Ukip are an ineffectual anti-EU party and should be challenged on that basis especially.

But it's not just the mouth-foamers of UAF who are playing the racism card.  The entire political and media establishment is playing the same game.  Frank Furedi argues that it is not working.  His long-winded explanation boils down to one simple premise: the public do not like being told who not to vote for.  If you insist that they should not vote for someone, they will do the opposite.  That is why Nick Griffin is an MEP for the time being - and it is why George Galloway is an MP.  The BNP succeeded in the last Euro-elections not because of their message but because it was a protest vote - and one that really was sticking two's up to The Man. I was almost tempted myself.

The same dynamic applies with Ukip.  Ukip has nothing of any great substance, and even though we are promised a manifesto, I expect it will be the same rag-bag of parish suggestions box entries picked out of a tombola with no unifying theme.  But something feels different this time.  For all the mainstrem hyperventialtion about Ukip, I think it is a mirage.

The establishment are jittery about Ukip because they have bought their own bubble narrative: "the rise and rise of Ukip". But the Ukip surge is a media fabrication.  It is entirely a figment of their imagination. Ukip doesn't actually have a vast reach. It is a fat carp in a shrinking garden pond. The fact Farage had to reshape the party to chase the million or so BNP votes tells you everything - that it had reached its inherent glass ceiling as a single issue party and had nowhere to go but the BNP populist vote to convert the collapse of the BNP into more MEP's.  Should it double its vote in a general election, it is likely to return only a single MP (give or take).

The establishment thinks this Euro-poll surge will lead to an inexorable rise, but that's because they are teenage scribblers, bubble-dwellers and morons. The BNP had nowhere to go and nor does Ukip.  There's very little substance to this whole Ukip panic. There is an anti-EU sentiment that will be replicated across the EU in the euro-elections - and it has more to do with the failure of the EU that the innate appeal of Ukip.

That this whole non-story has captured their imagination enough to produce volumes of space filler actually says more about the vacuity of modern politics and the media than their than the reaction to Ukip. They lack the analytical capacity and the historical context to see Ukip for what it is: a protest blip. To get any sense, we have to go back to last year to James Heartfield's offering in Spiked, in which he concludes "UKIP’s vote is one in the eye for Westminster, and maybe even for Brussels. But in the long run, and unless people create a real alternative to the failing mainstream politics, the EU will gain in power by default."

Heartfield is one of the very few who understands the game in play, and while the Ukip-mania may provide entertainment for the domestic media, what we are seeing is part of a broader trend that demands a more level-headed second look.  Protest votes come and go.  Each time the surge is larger but dissolves twice as fast.  Blogger "Boiling Frog" today remarked "I have for some time looked at UKIP as a "canary down the mine", it's not the solution but it's a warning of what's to come."

I could not disagree. While Ukip is not a fascist folk-demon, it comes pretty close in that it is a cult of personality.  And each time, as the establishment becomes more remote, the reaction becomes more intense and severe.  Thus if we wish to avoid a repeat of an ugly history, we should heed James Heartfield.  We need a credible alternative - and not the populist posturings of Ukip.  We think we have one in The Harrogate Agenda.
Posted by Pete North at 15:20