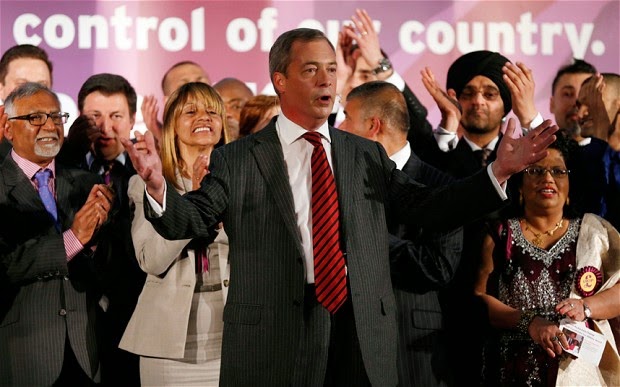 When in thrall to a tribal delusion, the easiest person to deceive is yourself. Just ask any Leeds United fan. And the same applies to Ukip. Looking at Ukip's parade of ethnic minorities one can only ask, who are they trying to kid?

The thing about protest parties, in full view of the media, is that they provide a platform for non-entities and excommunicated local politicians with galactic egos.  They need Ukip, and if they represent an ethnic minority, Ukip needs them.  But this is a Faustian pact.  The problem with craven narcissists seeking a platform is they tend to be a liability.

Ukip once fielded the cringe-worthy Winston Mckenzie to display its non-racist credentials, and he was as much an embarrassment to humanity as he was to Ukip.  He made Farage look a serious person by contrast. Just recently Ukip's Commonwealth spokesman was exposed as the former leader of a kidnapping gang in Pakistan - and one suspects that one of these folks so proudly displayed by Ukip last night will be the next major embarrassment for them, assuming it is not Farage.

This is not the first time Ukip has flirted with ethnic minorities to parade its non-racist credentials.  I remember in 2001 when Ukip recruited Asian candidates in Bradford, one of whom backed out after threats against his family by political rivals.  They were using Ukip as much as Ukip was using them.  As I recall it has a great deal to do with divisions over Kashmiri independence. Bradford politics are murky even by the standard of UK local politics. Whatever was to be gained by recruiting an ethnic minority as a prize show-cow was not worth the price paid.  Since then, they have learned nothing.

But now, having hollowed out any sense of ideology and having no policy conforming to any informing principles, the dustbin protest party is a safe vehicle for ethnic minority narcissists to climb aboard now that Ukip doesn't really stand for anything.  They get what they need, and Ukip gets what it needs. As long as they keep their noses clean, it's mutually beneficial.  So now we get into the territory of screening representatives and candidates.  That results in the squeaky clean, vanilla types with no strong views on anything of substance - the type we are all so sick to the back teeth of.  I almost feel sorry for them.

Now what we see now is a carefully stage-managed event with ethnic minorities front and centre, but for Farage in a messianic pose, so that Ukip true believers can point to the picture and in all seriousness deny allegations that is a racist party. Only the true believers will buy it.

Of course nothing about Ukip is overtly racist, it's just that knee-jerk, fact-free populism attracts the racists and fruitcakes who continue to taint Ukip's public image.  Essentially this exercise is damage control for a self-inflicted wound.  If Ukip wants to be seen as a non-racist party, rather than cynically parading ethnic minorities, perhaps it could persuade their members not to say racist and bigoted things?  Or is that a taller order?

But there's something of a landmark event here.  A party that has tokenistic stage-managed photo-calls can no longer claim to be the antidote to establishment politics.  It looks like more of the same to me, and the bigger Ukip gets, the more of it we will see.

What this demonstrates is how any new party must become the establishment to seek power.  It has sacrificed so much along the way that I now wonder if it will even remain true to the basic policy of leaving the EU.  I bet I could find new Ukip members who would vote to stay in the EU.  This demonstrates the folly of populism and the ineffectiveness of the party political system as a mechanism for change.  The old adage "the higher the monkey climbs, the more you see of his ass" most certainly applies to Ukip.  This is what happens when you have followers attached to a cult of personality rather than a growing movement based on ideas (where personalities do not matter).

The sad part is, I really wish I were so easily deceived as Ukip followers.  It would be nice for once, as a eurosceptic, to feel like I was on the winning side and gaining momentum alongside allies, but when you take a sober look at the numbers, and play out all possible scenarios, it looks as bleaks as ever it did. As a eurosceptic viewing Ukip from the outside the collective delusion, it's like being outside of The Matrix. Fighting it is a necessity, but a big part of me envies their ignorance.

Meanwhile, as the numbers stand, and given the media's complete inability to distinguish fact from fiction and theatre from reality, it looks like any referendum on the EU will result in a loss for the good guys - burying the issue for twenty years.  So I have to ask, what exactly do those in the Ukip cult think thay are achieving?

They tell me they have oh-so-clever people like Patrick O'Flynn in charge of communications, yet their web operation is just as lacklustre and stupid as ever it was - and Ukip now has policy wonk Tim Aker in charge of building their manifesto following the embarrassment of their 2010 effort.  But all the signals on social media are that Ukip will expect us to take the like of this seriously. If that's the best they've got, then we really are in serious trouble.
Posted by Pete North at 15:15