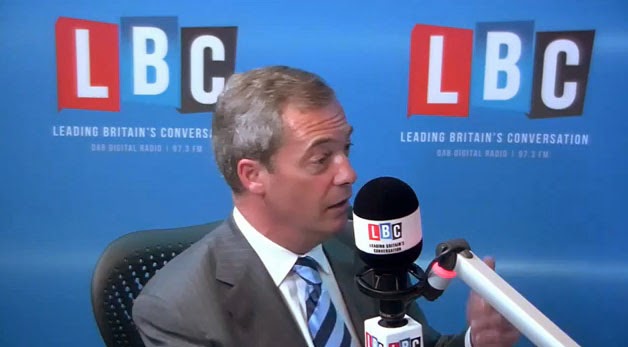 This post will come as a surprise to some of my regular readers.  I feel obliged to pass comment on what is being billed as Nigel Farage's "Nick Griffin Moment" on LBC.  Some of my Ukipite readers will expect me to make great hay of this interview but I'm a afraid I can't.  Listening to the interview, what we are seeing is a form of (please excuse the hackneyed expression) McCarthyism.  Nigel Farage and Ukip are supposed to be guilty by association with the people they have met who have ties to far-right organisations. What nonsense.

It has been my experience that activists in the far-right tend to be philosophers and thinkers. You wouldn't agree with all that they say but you may agree with some of it - and only a closed mind can be entirely dismissive.  When you are in business of politics you have to listen to people and their ideas, and you must know and speak to enemies as well as friends. Politicians are just people and they, like us, are not endowed with ESP so to know the intimate past of everyone with whom they speak. The debate has lost any sense of maturity and has become a witch-hunt.

I am from Bradford, West Yorkshire which has always had a strong contingent of "far-right" political activists, some of whom are among the most interesting people to talk to, even though I have nothing all that much in common with them politically.  In fact, I recall about the time of the last Euro-elections I was paying particular attention to the output of the BNP, because if you detached the entho-nationalist and racist aspects of their writings, much of their approach was entirely consistent with a sensible nationalist quasi-socialist party with ideas that were at least worthy of debate.  They were necessary and timely debates, and the BNP was talking about the policy of multiculturalism long before Ukip even dared.  That debate even brought abut some free and frank admissions from both Tony Blair and Jack Straw which were certainly not what one would consider politically correct.

I took the time to debate a few of the leading minds behind the BNP.  They were not stupid people.  Their policy making was consistent with their intellectual foundations even though they were based on white supremacist thinking.  One could only envy their discipline and adherence to what was a well thought-out communications strategy, and to this day Ukip still struggles to replicate the kind of professionalism as was on display at the time.

I wrote a blog at the time (now defunct) to discuss some of their ideas, some of which were quite good - but by way of defending their right to free speech (before it was fashionable), I found things awkward among my more prudish friends, who then turned their backs - even though the BNP had explicitly told me I wasn't racist enough to ever be a member. Though I feel better educated for the experience.

I actually went to a BNP public meeting once, and it was not at all what I expected.  It was a fun and polite gathering working class Bradford people, who were very welcoming, and in fact, national politics was barely mentioned at all.  They spoke of their activities in the community, some of which were very positive.  It was there I met Dr James Lewthwaite for the first time, who is a very interesting man to talk to, who certainly challenges my thinking, and he starts legal fights with the council and the police even I would think twice about; a form of civic activism I wholly applaud.  It is not free of risk and it is inconvenient and expensive. I still speak with him and support his efforts in that regard.

So there. I have strong past links with the BNP, I don't deny it, nor am I ashamed of having a mind open enough to go and find out if what the media was saying was true or not.  If that, by association, makes me a racist then let that charge stand.  Those making that charge are essentially illiberal people with closed minds seeking to stifle very necessary debates - and closing themselves off from different opinions, instead allowing the media to tell them whose opinion is acceptable. That is ten times more harmful than any "far-right" individual exercising their right to free speech.

What we see in this LBC interview is a concerted attempt to police not only public discourse but political discourse between academics and politicians. Nigel Farage is an MEP.  He talks to other MEPs and their staff.  Quelle surprise.  Yet little is said of the left-wing MEPs who work alongside former communists and current communists in very senior EU positions - and face precisely zero media scrutiny for it.

Not having a television, I tend not to see political interviews very often but I can't recall in recent times an interview where the presenter had such a strong command of the arguments in order to properly scrutinise their prey.  Were political interviews this thorough in all instances, perhaps we would have a much more informed electorate and a more mature national debate.  There can now be no doubt that there is a mainstream media assault on Ukip, holding it to levels of scrutiny that simply don't apply to the other parties.

Farage did a fairly good job of fending it off in view of an aggressive host - and being scrupulously fair, given my past associations, I think I would have found myself making similarly awkward twists. If you can hold your own in those circumstances, you're doing quite well. If anything makes this interview the "car crash" it is billed as, then it's the untimely and unwelcome intervention of Patrick O'Flynn, who is supposed to be an expert in handling the media.  Were I Farage, I would quietly sack him as soon as is politically convenient.

Once can forgive him for having to defend stupid remarks.  When one is in the public eye as as much as he, stupid remarks will be made - and we're all entitled to an off day. As to having Romanian neighbours, well I've just gotten rid of a set of them who were noisy buggers and played music at anti-social times of day, and yes, when they first moved in, until I got the measure of them, I was concerned and a little uncomfortable.

Noise disputes can very quickly escalate into ugly conflicts and I was even contemplating whether I would have to move out in such an eventuality.  And you know what?  That's normal. That's a very human reaction. We mistrust what we don't understand.  I moved out of central Bristol to move into a quiet neighbourhood to escape noise, conflict and hassle - so anything which disrupts the sleepy status-quo of leafy suburbia is cause for concern, even if it is Filton, South Gloucestershire.  So there.  I admit it.  I am guilty of being (gasp)... middle class. On the whole I think Farage is more in step with the public than James O'Brien, who would probably have a panic attack should he find himself outside of the M25.

But, (and you sensed this but coming)... what did you expect?  Really?  Not only was this line of attack predicable (and predicted), it was entirely avoidable.  Ukip has always had a large contingent of fruitbats and nutcakes and there's no escaping it. It has always been a bit of a problem and it was always going to be a liability. But while Ukip talked about matters of trade, sovereignty and accountability they were a manageable facet of Ukip's dysfunctional make-up - and easy enough to shrug off.  That is why it has taken this long for Unite Against Fascism to turn their guns on Ukip.

So why now? You know why;  The fact-free scaremongering posters - and the rapid transformation of Ukip into an anti-immigration party - rather than the party we built in the 90's on the founding values of democracy, sovereignty and global trade. I noticed yesterday that the Washington Post described Ukip as the "anti-immigration party". That is how it looks to the outsider. It is no longer seen as an anti-EU party. That is entirely the doing of one N. Farage. You make your bed, you lie in it.

Anyone with a functioning long term memory will remember what happened to the BNP shortly after its moment in the sun, making hay of immigration fears.  It was always a fickle vote, based on massaged fears stoked up by the media in the run up to the election, and it was always a limited constituency. Once you turn down that road, there's nowhere to take it afterward. Nigel Farage did knowingly and wilfully chase this constituency, against better advice, and now without the popular folk-demon of the BNP, Ukip is the target. It could be no other way, yet Farage scored this own goal - and now it is doubtful the damage can be undone.  Certainly not without the departure of Nigel Farage.

Essentially Ukip has failed to learn the lessons of others' failures, and Farage, true to form, has disregarded good advice and now Ukip's primary preoccupation is damage control.  I doubt if this is Farage's "Nick Griffin moment", but for the good of Ukip, if Ukip is to survive, for all the good (and bad) he has done, he must go.  He has overreached himself and has come to the end of his useful shelf life. In the run up to an EU referendum he is a liability none of us needs.  The full effort must go into fighting and winning the EU debate, not defending the reputation of Ukip and Nigel Farage. At this stage in the game, we can ill afford any more own goals.
Posted by Pete North at 08:46