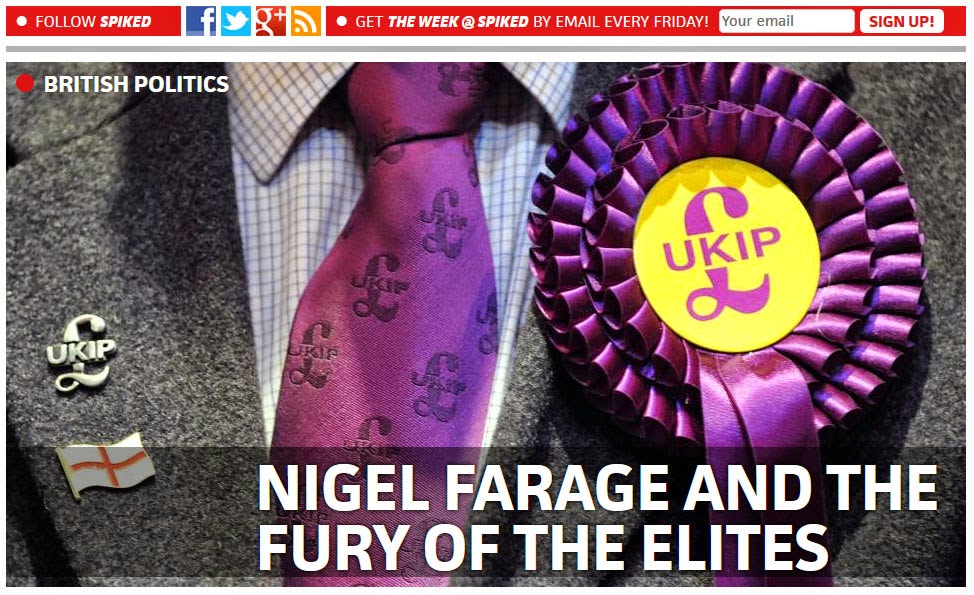 In Spiked today, Brendan O'Neill offers a somewhat boilerplate article from the other side of the debate, which differs little from anything that might appear in Breitbart or The Commentator. A surprisingly conventional view for Mr O'Neill, adding to the acres of coverage already devoted to the latest media plaything.  He describes the rise of Ukip as an "as-yet unclarified political sentiment that doesn’t only say ‘I’m sick of the old political class’, but also: ‘I want to be heard. I want to be taken seriously. I want control over my life, my community and my nation again".  But we have been here before.

Nothing here is all that different to the 2009 campaign against the BNP.  It was the same constituency of the disaffected being told their views were unacceptable - and it is the same manufactured outrage. The only apparent difference here is that the media appears to have honed its ability to monetise it by trolling the self-selecting army of Ukip robots.

This is safety valve politics where the high pressure steam can escape - but in all the excitement, few have stopped to ask, apart from a morale boost for the Cult of Farage, what does all this white noise achieve?  It tells us nothing we didn't know already; that our aloof and remote political class holds the public in contempt. It shows how bereft of ideas they are - and it shows our parochial media as weak, lacking any kind of moral base, and interested only in the bottom line - but that is nothing new either.  So what will be the lasting contribution, if any?

The success of Ukip will be judged on what remains of it once the media caravan has moved on and found a new plaything.  Measured against the goal of leaving the EU (the reason the party was started) Ukip is failing and failing badly, and in fact has the potential to undermine that end.

So if it is no longer about that, what is it for?  What does a large protest vote, united by little other than generic disaffection, achieve of any lasting value?  What will Ukip accomplish with a few more MEPs that it hasn't already had the opportunity to do? Are we any closer to democratic and responsive government? Does Ukip even want that? These are sobering questions that few are in any great hurry to ask and answer.  Thus this Ukip jamboree is little more than entertainment - and we will be here again.

One can only echo the sentiments of Simon Cooke: "We will vent our anger at the beast by voting in protest - just as many will do tomorrow across Europe. But it will change nothing. Oh, there'll be some tweaks to policies but the main message will be business as usual. Worse still the odder opinions of the parties of dystopia will make it easy to dismiss them as nutters, racists and opportunists - the process of change will be associated with the mad or the bad and the change won't happen. In a strange way, allowing people to vent their rage by electing Ukip MEPs - members of a parliament with no powers and no sovereignty - rather suits those who want to protect big, badly run government. It doesn't affect what actually happens at all but gives people the grand illusion that they've stuck it to the man!"
Posted by Pete North at 03:59