Ukip: cart before the horse 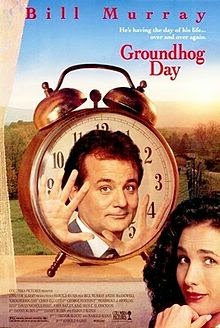 Yes, yes I know.  I am not allowed to write about Ukip because I'm not very nice about them.  Though being gifted with a long term memory greater than that of a gerbil, I am suffering from a distinct case of Groundhog Day.

It has been put to me that this demonisation of Ukip is entirely unprecedented, with the full weight of the media going into hyperdrive to combat the "threat to the establishment". But one cannot help thinking we have been here before.

At the last euro-elections, precisely the same campaign was mounted against the BNP in equal intensity and volume, with acres of extruded verbal material devoted to the question "what is behind the rise of the far right?"  And they were just as dull then as they are today. Of course it didn't stick quite so well on the BNP because a headline that a BNP councillor was a racist is a bit like running a headline that a dog has four legs. The BNP did not deny being racist, but Ukip does. Therefore a Ukip racist is news. But there is nothing new about any of this orchestration.

In 2009 we had Labour minister Phil Woolas pleading "At the European elections on June 4, I would prefer you vote Labour. Indeed, I will be tramping the streets getting our supporters out to vote and trying to persuade others to follow suit. But if you are not supporting Labour then please, please go out and vote for one of the other main parties."

As fierce as the anti-Ukip agenda is, I have yet to see anything comparable. At best we have seen Telegraph hack Dan Hodges producing a daily barrage of clickbait which rapidly produces over a thousand comments, and ballooning Twitter fluff, but a minister essentially saying "vote for anyone but the BNP" is wholly unprecedented.

Of course that spoke volumes about the emptiness of the politics of the day.  At the time, of the BNP we remarked "There is no need to play the "fascist" bogeyman card. This is a party which is a political lightweight, with policies which do not even begin to address modern realities. It should be easy to dismiss as a joke."  That was true, but that very same easily applies to Ukip today - and that is yet another reason I am suffering from deja-vu. If we had a media capable of any serious analysis Ukip would be brought down on the basis of their lacklustre ideas, rather than the media galvanising Ukip support by picking on every insignificant, transparent morsel of faux-news.

But Ukip cannot complain about this orchestrated campaign.  This is just the reality of modern media-driven politics, and Ukip has done rather well out of it. So invested were the establishment in countering the BNP threat, they even talked up Ukip as an acceptable protest vote - and Ukip didn't seem so vocal about media stitch-ups back in 2009. If anything Ukip has been built up by the media, purely to deal with the BNP threat. The rise of Ukip is a product of that same media agenda to marginalise the safety valve protest vote. It's all part of the cycle.

Initially, the deliberate determination of the media and the political establishment to ignore UKIP was reflected in the total lack of party gains, which meant that very few of the voting public realised how dire and uninteresting it really was, and how little it had to offer.  But in the absence of the BNP, the media needs its folk-demon - and Ukip is now it - and to an extent hold the balance of power.

It was always the case in recent that the minnow parties made the difference in elections. It is what we then dubbed "the Ukip effect". The only real difference between then and now is that the minnow parties are now largely united under the Ukip umbrella rather than being split between the independents and the BNP. It was always the case that the media and the political establishment would gang up on that same protest vote.

This will not be reflected in the euro-elections since it is an empty opinion poll on the EU - but it will be reflected in the general election.  That is not because the public are so feeble-minded that they cannot see through the smears.  If the average Ukip supporter can see through it then so will the average British voter - for they are one and the same.  What will kill off Ukip is their complete lack off substance.  This media attention will die down but Ukip has certainly got our attention, whereby people will be asking what Ukip is, and whether it offers us a credible alternative.  It doesn't. For a party that wants to leave the EU, it has no real idea how to do this.

While such technicality matters little in a euro-election, in a general election or an EU referendum the dynamic is different.  The Socttish independence debate has triggered a deep and thorough debate on Facebook around the issues, and the Yes vote is suffering because the Yes camp is directly linked to Alex Salmond whose grasp of the issues surrounding the the decoupling of Scotland from the union are weak.  Farage is in no better standing - and equally obnoxious to an equal proportion of voters.

To assume that the debate will not be won or lost on matters of serious policy and detail is to underestimate the British voting public. This is a mistake. The majority of the British public no longer vote, which tells you they are much smarter than they appear.

Positioning Ukip as the media folk demon might have been an astute political move to dig Ukip out of the political doldrums, but only if it had first done the homework to present something bulletproof. But it hasn't. It has a rag-bag of thin populist aspirations with very little flesh. While Ukip may have smashed through the publicity stonewall and they are now standing tall, they are standing naked - having put the cart before the horse.  And that will cost them.