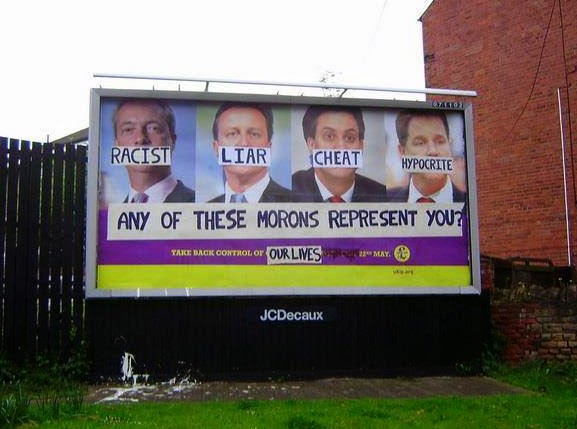 The navel-gazing of the Left is seldom very interesting.  James Heartfeild of Spiked, however, has some interesting observations. Left-wing pundits have been asking for some time now what the Left is for, and why it fails to find a constituency.  In many respects, it has no where to go.  It has got what it wanted.  We now, for the most part, live in a land of equal opportunity and material wealth.  All but for a small fraction of the population can boast material comforts and access to knowledge in unimaginable ways.  From big screen TV's to hand-held internet - and creature comforts at rock bottom prices, even in what is billed as a major economic down-turn.

What sticks in the craw for the Left is the fact this was achieved in spite of the Left, not because of it.  It wasn't until the last vestiges of socialism were destroyed and unions were conquered that our economy properly thrived.  And now, the more that it pushes, the more it sends that progress into reverse.  That is not to say the Left did not achieve anything.  We don't have labour rights and health & safety by accident, and though unions overstepped their mark, the lack of effective unions, in touch with their members, is something we will come to regret.

But the fact of the matter is there aren't enough "have-nots" to form the basis of a mass movement. There is nowhere for the Left to go. Put simply, times have changed. But not by any means do we live in a liberal utopia.  There is a prevailing sense that we are somehow being short changed and herded like cattle. Our concerns are no longer material matters but there are legitimate concerns nonetheless.  According to Spiked, Adam Przeworksi, author of Capitalism and Social Democracy, describes the politics of the new age "post-material concerns", encompassing such concerns as the environment, civil liberties and global social justice.

I would go as far as saying the West has entered a new epoch.  The era of "post-material concerns".  But that does not exclude material concerns. There is a growing tension in the developed world. An uneasy feeling that material wealth is being slowly taken away from us, we have no voice in it - and the brakes have been taken off.

While the shops are fully stocked, we live in peace and we are notionally free, that freedom exists only within a defined set of parameters, broad enough so most don't notice they live in a cage - but that cage is getting smaller - and more of us are beginning to notice.  Not enough to make a change, but enough for the likes of Ukip to find a constituency of disaffected and marginalised.

There is no longer a Right vs Left struggle. That bickering still happens, though it is inconsequential since neither wing has a say in any case. There is only "above the line" and below it. To steal a passage from that very worthwhile Spiked review, we have "a self-styled progressive middle class, represented fairly uniformly by a political and media cohort, telling the ‘left behind’ that they’re, well, wrong: that their ‘bigoted’ views are wrong; that their fags and fatty-foods are wrong; that their whole being is, somehow, a bit wrong. The discourse is intemperate and condemnatory, personal and insulting." It is a culture war.  But it is also an economic war, waged by that same elite.

After decades of haranguing, coercion and bullying, exasperatingly we still disobey our masters and eat what we like, drink what we like and do the things that please us.  Having manifestly failed to comply with their demands, they use the mechanisms of public health, welfare and public order as a means to deprive us of the opportunity to indulge our vices. And now, for our own good, they need to take taxes directly from our bank accounts.

What we have then, is not a class war in the classic sense, but a conflict between the ruler and the ruled.  It deviates from the classic class struggle because we don't know our oppressors by name. Our local authorities are agents of Westminster, Westminster is an agent of the EU - and the EU is an agent of a complex network of anonymous trade organisations and global agreements - influenced by state-funded NGO's, corporates, trading blocs and global authorities.

Such is the complexity of global governance now that it is too big to communicate in simplistic terms through the media, especially to an audience with a limited attention span.  Thus it is framed by political opportunists as a simple narrative: We must leave the EU, for it is the malign foreign influence that holds us back in the world, and its extinction will bring forth a land of milk and honey.  If only it were so simple.

As regular readers of this blog know, much of the law coming from Brussels does not originate there. Whether ISO standards, Codex, OIE, IPPC standards, or much else, a huge amount of law actually starts its life in Geneva, Rome or other points around the globe. In studying the complexities of leaving the EU, the more we learn, the less we know, and the more we look upon the ignorant with envy as much as dismay.

In fraught times, with an electorate looking for answers, voters will drift toward those with easy answers.  For a time that was the BNP, but having demolished itself, Ukip has been keen to capitalise on that vacuum.  There is a constituency of the "left behind" and it is ripe for the plucking.

I would agree with the Ford-Goodwin analysis that Ukip has stumbled upon such a constituency rather than nurtured it, but having stumbled upon it, it has no idea how to nurture further and grow it - or has much of an idea as to what end.  One cannot cure a disease unless one has properly diagnosed it.  The Ukip "solution" is merely to obtain power through establishment channels then grant wishes.  That is insufficient, because it's more of the same.

However, because such an impertinent upstart party is saying all the wrong things, it attracts the ire of our rulers. Consequently, Brits, who don't like to be told what to think or who not to vote for will gravitate toward it.  Because Ukip is the victim of a persistent and concerted campaign by the establishment to discredit it, in order to position itself as the arbiter of what is good and wholesome, people are prepared to give Ukip a free pass, even in light of its own fear-mongering and false promises of sunlit uplands.

Watching the Ukip Euro-election broadcast, they are selling us false promises; that leaving the EU would uncouple us from costly regulation, restore British jobs and give us back control of our borders.  It's a nice, simple, easy message.  It is also wrong.  Moreover, for a party whose USP is leaving the EU, it hasn't given a second thought as to how this minor miracle is to be achieved, as though forty years of political, social, economic and regulatory integration could be undone at the stroke of a pen.

Insomuch as the mainstream media throws cheap-shots at Ukip by playing the racism card, this says less about the establishment agenda than it does their lack of intellectual architecture to challenge Ukip's vague and imprecise assertions. Ukip should in fact be thankful that this is all the media has the capacity for, because if there were any heavyweights among our febrile commentariat, Ukip would be in serious trouble.

But without such scrutiny Ukip climbs the greasy pole. And as Ukip climbs the ranks in order to play the game, it slowly becomes the establishment. Each time it makes a sacrifice or compromise, it slowly morphs into exactly that which it professes to hate. While Farage can certainly take a bow for accelerating the process, that is just the nature of the beast - and the natural destination of any party climbing that greasy Westminster pole. It is not that the wrong party is running the system.  It is the system itself.

For all that the EU has been scape-goated, leaving the EU solves nothing. A dictatorship based in London is no better and no worse than one based in Brussels.  Our problems go much deeper.  The cause of the disatisfaction and disaffection comes down to one very simple consideration.  We are not a democracy - and never have been.  We have elections and elected politicians and other voting rituals - but this is mere democratic street furniture.

The word democracy stems from the Greek word, dēmokratía, comprising two parts: dêmos "people" and kratos "power". Without a demos, there is no democracy. But people without power is not democracy either. Our current system of government is known as "representative democracy". That phrase embodies a misuse of the word democracy. People do not hold power, thus that system cannot by definition be a democracy.

Until you understand that very basic premise you canot possibly hope to offer anything to the people that isn't more of the same.  What we need is a framework that not only gives people a voice but dismantles the existing system in such a way that we can never be back here again. That is not on offer at the ballot box presently.  And that is why we need The Harrogate Agenda.  Sign it.
Posted by Pete North at 15:24