The Telegraph is waking up 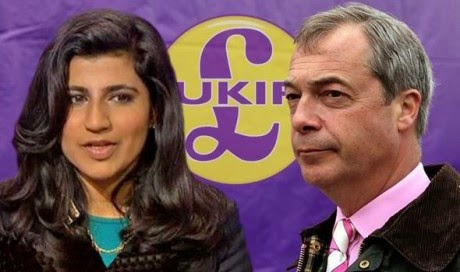 A curiously astute piece appears in The Telegraph today, written by the tea boy, Stephen Bush. It is a half-decent summary of all the things I have now been saying for months.  It comes as no surprise that their assistant comment editor has a greater command of reality than their superstar columnists, such as Benedict Brogan, who appears to have lost the plot completely. Bush's analysis is fairly on the money - but one can disagree with one of his conclusions:


"Eventually people stop seeing Nigel Farage, the libertarian and Establishment scourge, and see another Nigel Farage, a man who seems to spend a lot of his time surrounded by racists. That’s not the media’s fault, and it’s not entirely Ukip’s either. This is what happens in small parties; particularly to small parties that become powerful parties very quickly."

Bush is quite wrong. It is 100% Ukip's fault. Or rather it is Farage's fault for sacrificing sustainable growth for short term electoral gains. What was once a growing movement is now a generic dustbin for protest votes with nowhere to go. J'accuse Farage, for it is he who, by his own admission, chased the BNP vote to bring about this more or less irrelevant euro-election landslide. On paper it looks like a victory but in the broader analysis, Farage has created a protest bubble that will burst in due course because, as Bush points out, there is little in the party make-up to unite the disparate strands of its membership.

What we are seeing, therefore, is Ukip riding two horses and running two strategies which are incompatible with each other.  It is now neither one thing nor the other. The consequence is that Ukip's growth has hit its high water mark, and now it has undermined its own values so that it has nothing to stand on - and has no constituency to grow, other than to continue massaging disaffection.  That has an inherent glass-ceiling as the BNP demonstrated, especially when you're grubbing in the gutters for votes.  What could have been a new force in British politics will now be a footnote in electoral history.

The sudden rise of the Ukip bubble has triggered a timely and necessary debate in the culture war waged by the establishment as to what we plebs are allowed to think, but the mistake for eurosceptics is to think that this debate is coupled with our EU membership.  It is not. That is a whole other debate and it is a debate we could very easily lose - and Ukip is not helping matters. Rally around Ukip if you must (and I wouldn't blame you), but that fight does not bring us closer to leaving the EU.
Posted by Pete North at 10:09