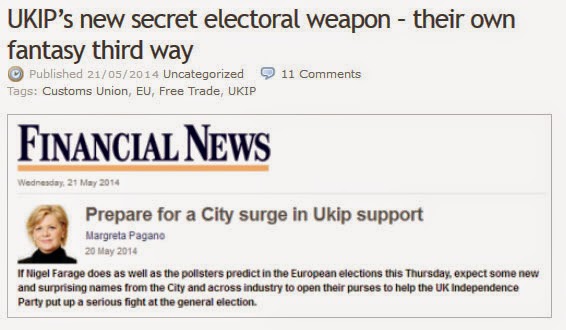 These are topsy turvy times when one must turn to The Guardian for a fair-minded assessment of Ukip. Patrick Wintour appears to have the measure of them...


Indeed, Farage has made a virtue of Ukip being a blank piece of paper, repeatedly ridiculing the Ukip manifesto written for the last election. He said: "It was drivel, 486 pages of drivel. I didn't read it, nor did the party leader. It was a nonsense, and we've put that behind us and moved on to a professional footing. I said, I want the whole lot taken down off the website. We reject the whole thing, we'll start again with a blank sheet of paper." Nigel Farage 'It was drivel, 486 pages of drivel': Farage on Ukip's last manifesto.

The blankness of Faragism helps the party forestall internal divisions and remain attractive simultaneously to disillusioned Labour in the north and disillusioned Tories in the south. When extraneous issues have emerged in the campaign with which he is uneasy, his tactic has been to prevaricate. Asked whether he supported gay marriage, Farage, once a libertarian, avoided an answer by saying: "It is a can of worms."

The lack of substance behind Ukip is entirely deliberate. The strategy is to be all things to all people. Thus Farage is not the leader of a movement, rather a spokesman for the disaffected of all stripes.  Something must be done, but Ukip will not say what. So it has nowhere to go. If ever it does define itself on the basis of an idea, the party base is too disparate to unite behind it. The only destination for Ukip is an implosion.

Eight of its original thirteen MEPs are not standing for re-election after public fallings out with the party’s leadership.  It won't be long before divisions in the new batch appear, and it won't be very long before one of the new influx gets ideas above their station. Once again Farage will prune anyone who may pose a threat to his leadership of the cult. My money is on Patrick O'Flynn making early moves for the leadership and then being very publicly fired.  I expect he is already on thin ice for embarrassing Farage on LBC. While that is speculation, Ukip has an attrition rate of over 50% among its MEPs and that is no coincidence.  Now that the party has fewer uniting principles than ever it did the cracks will show much sooner.

For a long time now, the party old guard who have been faithful from the beginning will start to wonder, as I did, if the party they joined is any longer the same beast.  They joined a free-market anti-EU party, but emerging reports suggest that even the anti-EU agenda is up for negotiation if there are a few more votes to be grasped. It is a party that has lost its way.

Just this evening I had yet another encounter with a Ukip sympathiser who thinks Ukip does not need a policy on leaving the EU. She stated that "Personally, I think it would be an alienating and self-indulgent mistake for UKIP to waste its limited resources on the withdrawal mechanism at this time." This is not an uncommon reaction among the new influx. So the party that notionally wants to take us out of the EU has no policy on how this should be done - and their members don't think they need one even in the face of a possible EU referendum in 2017.

As The Boiling Frog points out, "that's the equivalent of Andy Murray saying it would be an alienating and self-indulgent mistake for him to waste his resources on hiring a tennis coach and practicing in order to try to win Wimbledon". Ukip are asking us to vote on a policy they themselves have invested no intellectual effort in - and expect us to believe they are serious contenders when they haven't the first idea what they even stand for.

We know what the other parties stand for - more of the same. But Ukippers are asking us to vote for a party that offers us a radical change in how we do business in the world, but has no alternatives in mind, and no strategy for implementing it. Would you take that risk in a referendum? I very much doubt the average voter would, and I can't say I blame them either.

At this stage in the game you would think Ukip would have serious answers to serious questions. Sticking it to the man in a largely meaningless election is all good fun, but again I ask, what does it achieve if, in the final analysis, Ukip has nothing but rhetoric when the debate eventually gets serious? If Ukip folds on the issue of the EU and our exit from it, what was any of the last twenty years for?  Were we wasting our time?
Posted by Pete North at 14:32