Ukip: Another one bites the dust 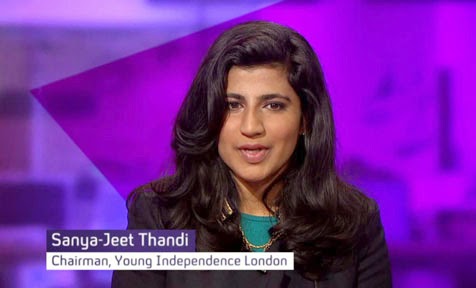 'Twas only the other day I remarked that "The thing about protest parties, in full view of the media, is that they provide a platform for non-entities and excommunicated local politicians with galactic egos.  They need Ukip, and if they represent an ethnic minority, Ukip needs them.  But this is a Faustian pact.  The problem with craven narcissists seeking a platform is they tend to be a liability."

Sanya-Jeet Thandi, Ukip ethnic minority poster girl has now quit the party with much fanfare - running off to The Guardian to retail her fears. According to "Guido Fawkes", she is a regular on the airwaves, and had been the TV front woman of UKIP’s youth movement for the last three years - and was described by Nigel Farage as the ‘future face of UKIP’.


As a British-born Indian supporter of Ukip I should be proud that the party I joined at 18 has grown to challenge the Conservatives and Labour so strongly. In reality, however, the direction in which the party is going is terrifying: Ukip has descended into a form of racist populism that I cannot bring myself to vote for. This week I decided to leave the party and I will abstain from voting in the upcoming European elections. I urge other Ukip supporters to do the same.

My reasons for supporting Ukip stemmed from liberal ideas such as lower taxes, a smaller state, freedom of the individual, local referenda, and an immigration policy that offered fair and equal opportunities for everyone. There was none of this "they took our jobs" business in the party's youth wing when I joined three years ago. Ukip's immigration policy, to me, was all about equality for every nationality; it was about treating Europeans and people outside the EU equally. But the recent racism scandals suggest, it seems, that most other Ukip voters and members support the policy – and the party – for a very different reason.

Interesting that she notes "There was none of this "they took our jobs" business in the party's youth wing when I joined three years ago".  That was about the time Farage took the leadership.  Coincidence?  I think not. Many times have I remarked on this blog that there is a glass ceiling in this immigration fear-mongering.  The charge of racism never used to stick to Ukip because it wasn't a racist party, and to a larger extent it isn't - but this latest poster campaign was always going to attract the little-Englanders and embolden the ones already in their ranks.  And now this has resulted in one of the prize show-cow ethnic minority members leaving.  It will be harder now for Ukip to escape the racism tag - a problem it never really faced before Nigel Farage's incompetent leadership.

Meanwhile, sealing their reputation as lunatics, Ukip have written to the police asking them to arrest anybody who calls them 'fascists'.  Three leading Ukip MEP candidates have released a statement saying they have "formally asked the chief constable to arrest any protesters who call our supporters 'fascists'," at a public meeting in Hove due to take place today. "We therefore call on the police to confirm that they will prosecute under 'hate crime' any individual or group who seeks to intimidate our supporters and candidates or at least under the Public Order offence under Section 4, 4A or 5 of the 1986 Public Order Act," they added. So ridiculous is this even the Daily Mash is beginning to notice.

For a party that stands supposedly for free speech and anti-political correctness, this is a dumb move that now makes it impossible now for Ukip to take the moral high-ground. This sort of things would be more or less excusable were it council candidates mouthing off as they do, but MEP candidates are supposed to be the best of the bunch who at least know what the party stands for.

It may seem trivial but I think this says something more. At that level of the party, campaigns of such a nature ought to be orchestrated and cleared with the party - and secondly, if the likes of Janice Atkinson are the cream of the Ukip crop, it suggests more worrying things in general are going on - or that Farage is still surrounding himself with lackeys rather than capable individuals. I think it the latter. If these are the sorts of people floating to the top and destined to become MEPs, there's going to be some serious embarrassments down the line that will damage Ukip for 2015. If this isn't a sign that the wheels are falling off the Ukip clown car, the bolts are certainly beginning to shear.
Posted by Pete North at 09:56