Let's do the timewarp again!! 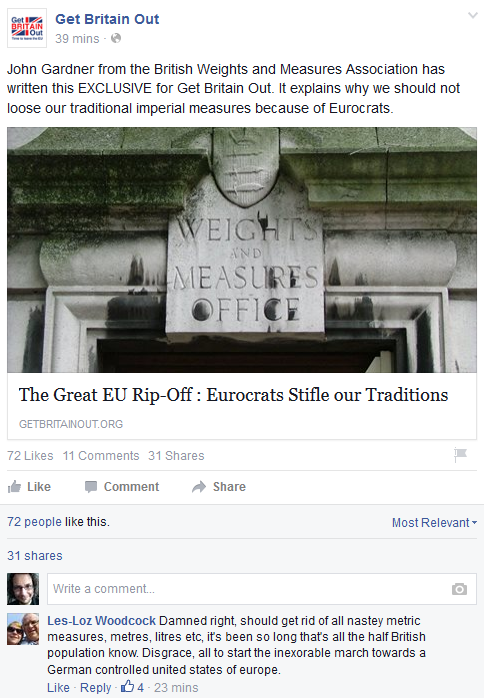 It's not just Ukip who test my patience. I've been looking at all the eurosceptic groups on Facebook and Twitter and frankly, these people are off their trolley. We see the sort of nonsense illustrated quite regularly, but the groups who should know better clearly don't. The Freedom Association and Better Off Out bunch are every bit as bad. And we need to sort this out. Let's take a look at their campaign message:

1. Freedom to make stronger trade deals with other nations.

Ok, super. What do those trade deals look like? What use is a trade deal with a dilapidated Commonwealth state that hasn't dredged it's ports for fifteen years? That hasn't got any refrigerated storage and has collapsing roads? That's going to take a lot of international development aid. Are we alone going to pay for this?

2. Freedom to spend UK resources presently through EU membership in the UK to the advantage of our citizens.

This is the membership fee riff isn't it? So we're going to quit the EU and end all intergovernmental programmes and not participate in Horizon 2020, Erasmus nor contribute to the ESA or the Single European Sky? The UK may actually want to participate in interregional programmes under the EU's Regional Policy and take part in the activities of EU agencies. The aim of the 'no' campaign is to detach the UK from EU political integration - not to isolate us from the economic and social life of the continent. The savings might well be small. This lot haven't thought about it.

3. Freedom to control our national borders.

On your bike sunshine. Not gonna happen. Free movement will always be conditional of single market access - and eurosceptics have been making promises that such will remain. Business wants it, it's good for the economy and it isn't the cause of our immigration woes. The problem with with our asylum laws - of which the EU is very little to do with it. As to non-Eu immigration - we already have complete control.

Restore it you say? I missed the time when it was good. But yes, let's talk about habeas corpus and all the other guff because the public knows what that means. Not.

5. Freedom to deregulate the EU’s costly mass of laws.

Silly kipperish drivel. This is the libertarian influence. There is a circle of hell reserved especially for these people because they really should know better. Regulation is what makes the world turn. Markets would not function without it. The clue is in the word - keeping things regular. And when you have a continent wide market of goods and services (a good thing) it really helps to have standardisation, commonality and compatibility of systems.

When negotiating such packages it naturally means that to reach agreements there must be compromises in the common good. Some nations won't have to do very much to meet standards (which tends to be us since we are a first world economy) but others will have to invest to raise standards. And yes that costs money.

To take the position of "costly red tape" is absurd. The reason being that irregular supply chains within compatible systems and different inspection regimes are massively more expensive. This is why we have mutual recognition of common standards.

If you think regulatory compliance is expensive, see how expensive it is when you ship a container load of perishable goods to a country that doesn't have the same inspection regime or different regulatory frameworks.

Moreover, when it comes to standards of goods, these are essential. We have agreements with China for production of electrical goods. It serves a function to ensure goods are produced to a particular standard so they are not dumped by the UK market. Why do we want to import food blenders that will catch fire?

Additionally, libertarians talk about capitalism driving innovation. Very often it doesn't. If a producer can continue producing the same thing for years without having to upgrade or invest then they will. Regulatory constraints however can drive investment and innovation. For instance energy consumption in appliances. It is ONLY because of global agreements that new washing machines are required to use less energy. Is this Malthusian eco-madness? No. It means customers pay less for their energy and we need to build fewer power stations. Ok so you might pay a little bit more for it but you save over time on your energy bills.

But this is a bone of contention for certain libertarians. How dare they meddle with our hoovers and washing machines and lightbulbs? WE DEMAND THE FREEDOM TO HAVE INEFFICIENT ELECTRICAL APPLIANCES!!!

Sounds silly doesn't it? That's because it is silly and crass. Have these people heard themselves? Most normal people don't particularly have an opinion on such things but most are reasonable about it. The only people who shriek about it are the Daily Express and The Daily Mail. But they are the people who will vote to leave the EU anyway, So where is the value in pitching the message at them? Is anyone really going to go to the barricades over the energy efficiency rating of their hoover or the diameter of manholes or the VHF frequency of maritime rescue equipment? Good god, get a grip!!!

Course, because I point out that regulation is part and parcel of modernity, makes me public enemy number one. If we leave the EU there will be no bonfire of regulation and we wouldn't want to. But eurosceptics tell me this is all too complicated and voters only respond to simple messages. This is missing the point.

Voters are only exposed to short and simple messages, but they themselves are not entirely stupid. In the end they will vote on instinct as to who has the more credible message. Obsessing over regulation and complaining about food standards might be a preoccupation of dingbat libertarians, but mostly, people could not give a tinkers damn. I sure as hell don't.

Moreover, the Yes campaign will see us coming if we take that line. This is a thirty year old argument they are prepared for and know how to argue. They can make eurosceptics look ridiculous for arguing against things like clean air regulation - and really I won't lift a finger to dig them out of that hole because they ARE in fact ridiculous.

By revoking those pesky global agreements on washing machine efficiency, consumers save £10 on their next washing machine. Be still my beating heart. MAN THE BARRICADES!!! BREXIT NOW!!!

7. Freedom to improve the British economy and generate more jobs.

Shake the magic money tree and wave that magic wand.

Yes, let's make a big deal of that. Let's jump into our time machines back to 1989 when people gave a shit about fishing.

9. Freedom to save the NHS from EU threats to undermine it by harmonising healthcare across the EU, and to reduce welfare payments to non-UK EU citizens.

Harmonising healthcare would be just awful wouldn't it? Can you imagine the horrors being able to transfer medical records at the click of a button to a foreign hospital in an emergency? Can you imagine the confusion it would sow by having a standard continental agreement on the labelling of medicines? The bastards. Oh, and we already solved that benefits problem by getting rid of most of them. You have a problem with that? I don't.

Because fish and chips and morris dancing are banned by the EU? I don't even know what this means. And nor do the moderate swing voters. When the swing vote for this referendum tends to be the moderate middle, and a lot younger than the eurosceptic demographic, why would you bleat on about imperial weights and measures to people who have only ever used metric and can't see the value in it. Pensioners wiffling on about how they used to pay two shillings and sixpence for a pound of stoats ears is really not an inspiring message.

All the leading eurosceptic groups are trapped in a timewarp - caught up in 30 year old arguments weaved into a long established narrative. Kids, it's boring. I'm bored of it - the public is well versed in these arguments and they don't just don't inspire - and that's why people won't touch the EU issue with a barge pole. It's a stagnant debate and these talking points have been around for as long as I can remember. The Yes campaign knows them as well as we do, the world has moved on, the issues have changed, and the challenges are different.

What we see above is an isolationist message, not all that far removed from Ukip's and it's largely predicated on wishful thinking and turning the clock back. It's also infused with a dash of the dogmatic and obsolete libertarian tract - fantastical nonsense that assumes we can just pick and choose which global standards we comply with. I can drive a horse and cart through every single argument the No campaign has and if I can, the Yes campaign will make mincemeat out of them. If this is what we're going to war with, we might as well run straight into the machine guns.

Oh sorry, is this me not building bridges and co-operating? Am I not building a consensus? I am such a meanie aren't I?
Posted by Pete North at 02:29