I will change the record when you do 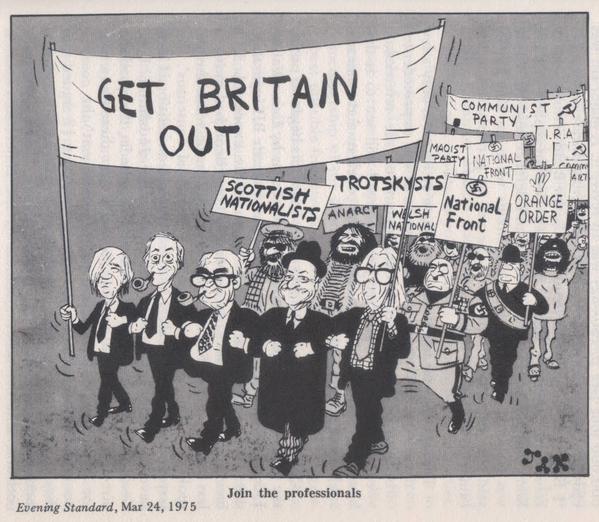 I was contacted this evening by Kate Hoey MP, sniping at me for my persistent criticism of Ukip and their "four million votes". She is not the first this week and I really do find it tiresome. You see, I actually don't want to be making enemies like this. I don't want the nasty invective of kippers directed at me either. I would rather be doing something more productive, but if we expect to win a referendum we are going to have to reach at least five million swing voters who would never vote Ukip in a billion years. Consequently the very last thing our side needs to do is pitch our message at people who are already going to vote to leave the EU.

This is not rocket science and it distresses me that I have to point this out. How many times does it have to be said?

From Ukip we have see everything from a generic hatred of foreigners through to crass misinterpretation of what is actually happening with migrants - and what effect Brexit will have, through to the weak and hackneyed arguments of the long standing eurosceptic inner circle. We're not reaching any new people with this stuff and as we saw in the election, the more Farage spoke the more the polls indicated people would vote to stay in. His personal approval ratings are minuscule outside of the Ukip cult.

We simply cannot spend the whole campaign talking about immigration. It drags our side onto the racism battlefield where we stand no chance of winning. Mrs Hoey remarked that immigration is a huge issue, and indeed it is, I don't deny it, but while it is a primary concern there is no common agreement on what to do about it - and Ukip dogwhistles are not only wrong, but a dangerous liability.

As wearisome as the immigration debate is, the regulation argument is not a winner either. The free market libertarians of Ukip are spouting total crap about regulation almost to an unhinged degree, when most moderate people recognise the social function of it - and are not nearly as hostile to regulation as Ukip believes. There is a good reason why libertarianism is a niche of a niche in British politics. Ukip MEP's bitching about helicopter safety regulation really is risible.

Similarly, we have also  seen the Guardian exalting the virtues of beach hygiene regulations. As it happens, they are WHO and UNEF global standards but very few are making that case and instead, prefer to talk up a bonfire of regulation which is not going to happen under any circumstances. There are better ways to argue this point.

Mrs Hoey states "I personally put the democratic accountability argument very high on my reasons to leave but for The Labour left it is privatisation TTIP etc, and for Conservatives it is free market. We will need everyone with a reason to want out to be part of the big tent and that means lots of people we don't like but will have to work with!"

Sounds good in theory but look who's in that tent and listen to the noises coming from it. The domestic accountability argument is the more sensible approach as far as it goes, but it's still not a very inspiring message. And while there are many good reasons to oppose TTIP, the left will not put those arguments forward and will instead will bleat about the NHS and pesticides. This marks the subject as a cause célèbre of the (far) left and won't go over too well with the swing vote.

We have to look at the last general election to see where the public mood lies. They voted Tory. There's a clue there. The swing voters were not sold on Miliband, and the zeitgeist is centrist conservatism. What have we got that speaks to that?

Looking at it as it stands we are back in 1975 territory as per the illustration above, with no apparent moderate voices talking up a progressive message. Far from it in fact. What we see from Ukippers is venomous and unbridled hatred of the EU. They don't just want to leave the EU, they hate it with every fibre of their being and would like nothing more than to see it fail. This is toxic.

Whether we leave or not, the EU exists and is not going away, so this referendum is a question of what sort of relationship we want with the EU. Do we want ever closer union, associate membership or completely out? We know our preference, but Cameron will attempt to sell us a third way. While you or I won't be convinced, the same people who believed Cameron had used the veto will believe the fudge on offer is an attractive proposition.

We have to prepare for that and build up a viable and realistic alternative that is more attractive to the swing vote than whatever apparently convincing offer Mr Cameron makes. But we're not doing that. That "big tent" Mrs Hoey speaks of is not a tent I would want to walk into.

Of course, I do not expect any sense from the left - and the influence of the RMT, (they who regularly grind London to a halt for their cosseted train drivers) does not really improve our chances. Moreover, I don't really see Corbyn as an asset should he move his tribe into alignment with our cause. Then, on the right, many of the Tories have opted to sit on their hands and wait. If Better Off Out are anything to go by, we cannot rely on the London set for any inspiration either. It's looking pretty shambolic. Meanwhile, the Ukip cannon fodder will soil the bedsheets at every opportunity.

Being that No is ten points behind in real terms, we have a massive gap to close. We cannot spend the entire campaign running damage control because of the nihilistic wreckers and cyberkippers. The imperative is on their leadership to up their game.

It is therefore tiresome and more than a little bit offensive that people bring their complaints to me when as far as I can see, our little outfit is the only one giving more than a nanosecond's thought as to how we actually win this. This is cause and effect here. If I complain at Ukip's inadequacy, the way to stop that is for Ukip to pause and address it's own shortcomings.

If eurosceptics would rather I shut up and not point out the flaws in strategy and the wilful factual errors promoted by Ukip then I am afraid I can't accommodate them. Public and media scrutiny of us will be more intense than even in a general election, and now is the time for this rabble to spend a little less time banging on about immigration and more time building a case that reaches new ears. One that is pertinent to the question Cameron will present. Until it does, Ukip cannot expect an easy ride from me. The short of it is, I will change the record when you do.
Posted by Pete North at 17:54