Thanks but no thanks. 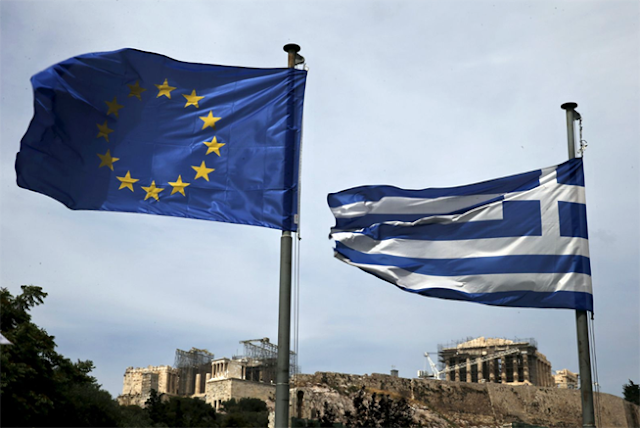 Apparently you now have to support Greece as the downtrodden victim of the EU to be a true eurosceptic. This is stupidity on stilts. It's one thing to want us to leave the EU, another thing entirely to want the EU to fail in its endeavours to lift Greece out of the depressing bog of corruption. Nobody has anything to gain from letting Greece fold completely. A total collapse of governance would be a major headache for European stability and security.

We have to stop treating Greece as a debt crisis or a currency crisis. The Euro is not in any great peril, it survived 2008 and it can survive a chump change economy like Greece now that the contagion is contained. Most of the economist are peddling a scare story because that's what sells newspapers.

It should instead be viewed as a major theft crisis, because that's why Greece is broke. It has spent its way to oblivion while neglecting the basics of governance. Most state procurement contracts have resulted in vast sums of money going missing. If we do "stop meddling" and let Greece go its own way, we're still going to have to pump in money just to avoid a massive humanitarian crisis. Only without leverage, whatever money we send will go into a black hole.

Either we restructure and rebuild Greece or we simply give up, let it fester and watch the whole thing fold. I think that would probably result in a low grade civil war and nobody wants that. It would be absolutely impossible for Greece to recover without EU membership because the corruption is now endemic to the culture. Call it an administrative occupation if you like. In effect, Greece is an occupied territory and while some on the left would call that EU imperialism, I don't actually have a problem with it.

Even if the EU never existed there would still need to be a pan-European political effort to tackle Greece because its own maladministration has massive implications for Europe as a centre of trafficking, smuggling, counterfeiting and the international black market. In that respect, such intervention is not imperialism - it's self defence.

We can't afford for Greece to remain a corrupt kleptocracy and we can bleat about democracy but in essence Greek democracy is a free pass for them to keep robbing Europe blind. Greece has been conning the EU for years saying it will make the necessary reforms but there is scant evidence of this. Germany has finally lost patience and I don't blame it.

I would like to see Britain as a developed first world nation leave the EU because we are another world away from what Greece is and we don't want to be in a political union with any of these rogue states - and we should pity Germany for the burden it must now carry. But Germany sees EU as the means to bring a form of order to Europe, and both France and Germany are agreed that a new EU treaty, effectively assuming control over the fiscal policies of these rogue states, is the only way the Euro can work. They are probably right.

What we don't want to see is the Euro fold because that is in nobody's interests. It is what it is, and though born from hubris and folly, there's no going back without a disintegration of mainland Europe once again.

In this we need Britain to be a friend and ally of the EU - from the outside - and we need to tell them when they are getting it wrong. I believe they got it badly wrong on Ukraine, and got it wrong on Greece through a mix of arrogance and naivety, but now the EU is pretty much the only game in town that can save Greece from itself. When it is done with Greece it will likely have to take a very close look at Italy too. Corruption is a cancer that is eating the Southern states alive and will ultimately destroy what little democracy there is.

The EU needs a new treaty in order to fix the many problems it has. That will necessarily mean it needs more powers. I can't see how it can work without. But as a functioning state and a state not in the Euro, Britain is largely a fringe concern for Europe - with a wholly different destiny. We can be a better friend to Europe by standing independently, promoting our own vision and values. We don't have to be in the EU to show solidarity with Germany and assist it in its aims of turning the rogue states into halfway functioning economies and we should welcome moves to improve governance. That said, policies designed to deal with these broken states are neither useful to us nor are they good for us. Unlike Greece, we can be trusted to run our own affairs because we have a strong record of doing precisely that.

It has often been said that the EU is just a tool of Germany to exert its dominance over Europe as if that were actually a bad thing. If only it were true. Brexit would effectively allow Germany to get on with it without being distracted by the griping of Britain whose relevance to (and interest in) the EU as a non euro member is largely inconsequential.

Brexit gives us the freedom to pursue things that we are actually interested in but ultimately takes the brakes off for the EU to get on with what it needs to do that will ultimately result in a stronger Europe. A stronger Europe is in everyone's interests but whatever is in the next EU treaty is not something Britain has any interest in signing up to.

The naked and irrational hatred of the EU is unhelpful and unnecessary because being pro EU is not incompatible with wanting to leave it. It has its faults but anything it does to EU member states is certainly no worse than what they would do to themselves or each other. There will always be a need for an international forum for Europe - and the EU is as good as any, but Britain is not so broken that it needs to be run by it. Britain is prosperous and doesn't need the EU's help to run it. Greece does.
Posted by Pete North at 06:16