Shape up or shut up 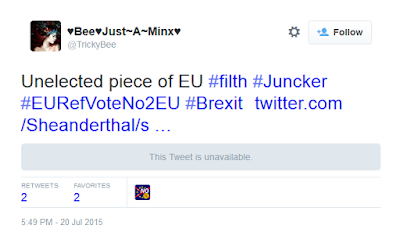 If arguments alone won debates eurosceptics could leave the opposition standing in any contest - from any angle you care to mention. But the world doesn't work like that. People don't judge on arguments alone. They take a long hard look at the people making them. On this score, we're screwed.

On the one hand you have Nigel Farage and on the other you have Owen Jones. Neither of whom represent mainstream or moderate constituencies - the very people we need to win over to win a referendum. Neither of these men could summon a fact if their lives depended on it - and they are both repellent in their own distinct ways.

But then their followers are no better either. The grunter featured above largely typifies the aggressive and fanatical nature of eurosceptics and depressingly it's not a mindset confined to Kippers. That one there is a Tory. The tweet is bristling with irrelevant hashtags - the internet equivalent of scrawling in crayon. You can dislike Juncker if you like. I'm not overly fond of the man, but to call him filth is beyond the pale.

Combined with the invincible stupidity of Ukip, we're going to repeat all the same mistakes as the cybernats and lose this referendum. We'll make a bigger mess of it than they did. These idiots have no self-awareness and no capacity for self-criticism. As ambassadors for the Brexit case they are a liability.

Some would demand uniformity of message. I think that's an unlikely aspiration, but it shouldn't be too much to ask that eurosceptics put a little bit of thought into how they are perceived and shelve the jingoistic, shallow and crass nonsense that litters the Brexit hashtags.

Not only are the arguments hackneyed and obsolete, they won't win over any moderate people. They will likely turn the other way in disgust - and I wouldn't blame them. They are pushing me dangerously close to it. It's embarrassing to be associated with them.
Posted by Pete North at 18:59