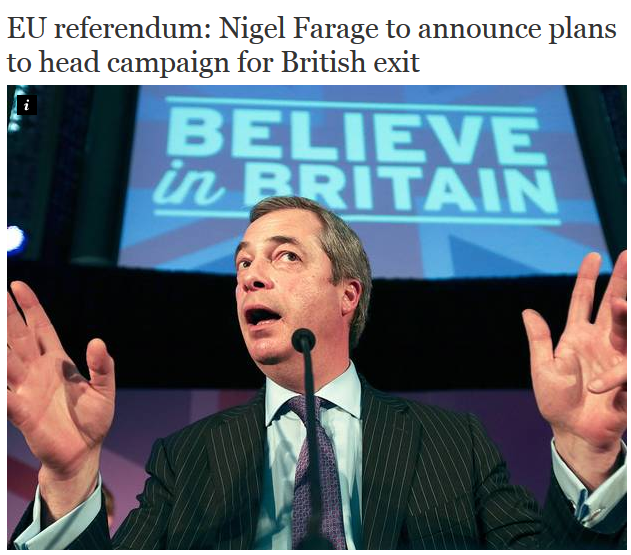 Ukip are imbued with an unconquerable sense of righteousness. It's a problem. It means they just won't listen to a single thing that's said to them. I made the point many times that running such an odious campaign on the subject of immigration would make it much harder to win an EU referendum. To this day these idiots don't get the point.

It is totally pointless trying to talk to a Ukipper about this. Regardless of how toxic and damaging Farage is, he still has their unwavering loyalty. Every single breath of mine was wasted. I had hoped that Farage at least would have the good sense to back away from the campaign but if the Independent is reporting things as they are, Mr Farage has clearly lost touch with reality and is insisting on being front and centre. This we do not need.

We have already seen hints of fact free campaigning he intends to run, once again grunting about immigration. It's too depressing for words. But then today we see a further extension of how Ukip intends to play it with Jill Seymour railing against new rules regarding engine monitoring equipment in helicopters. (fire monitoring)

Even though I have spent much of the last six years working in a department very closely related to aviation safety I profess to no particular expertise in the matter, save to say that there is no point in aviation standards at all if they are not international. Ground crews, operators, pilots and engineers cannot possibly work to multiple regimes according to the country of origin.  We need a common European standard so all operators and pilots are working from the same page. Y'see these helicopter things have a tendency to move about a bit.

And for Ukip to get worked up about instruments that cost £30,000 is naive in the extreme. If you are running a helicopter of almost any type then for sure £30k is significant, but still an amount you'd have in the petty cash drawer. Helicopters run on paraffin and money. Lots of it.

It's also tactically stupid to fight a campaign on these grounds. Not so long back we had a helicopter crash into the Shard in London, and then there was the dreadful incident with the police helicopter in Glasgow. The fact is that helicopters do crash with regularity, and when they do it's often in built up areas - and it's one area where we rightly demand the very highest standards of safety.

Jill Seymour says "This is yet another unnecessary EU rule which no member of the British public has demanded, and which is now threatening to destroy another UK industry". Silly assertions to say the least. The hyperbole about destroying the industry is, frankly, ludicrous and there are plenty of people demanding that corrective action be taken so we do not see more of the same types of incidents.

Ukip complains that these regulations exclude some of the smaller operators, but actually they represent the lions share of avoidable incidents since smaller, cheaper helicopters like the Robinson R22 (killer of Colin McRae and beheader of small children), are not what you would call robust machines, and possibly not what you would want flying over the capital city without the very latest safety equipment.

As far as the public is concerned, nobody is going to thank Ukip for drawing a line in the sand on the matter of airline safety. Even if they were right (and there is no reason to believe Seymour has her facts right) it still makes them look petulant and silly - and by association the No campaign. It is this kind of knee-jerk reaction that will make us all look clueless. Ukip is not opposed to safety regulation in principle - they just hate it because it comes via the EU. (Chances are, the regulation is not even EU in origin and we would implement it even outside the EU). It's irrational, unwise and about as crass as we might expect from Ukip.

The fact is that Ukip lacks the technical expertise and the perspective to fight on such grounds - and while it plays well to their narrow constituency, you won't find many moderate voters ready to go to the barricades over helicopter regulations. People tend to be suspicious of attempts to deregulate in these areas. Helicopters are rich men's toys and are not exactly the domain of the ordinary bloke in the street. Meanwhile, I'm rather surprised Farage himself doesn't have robust views on light aircraft safety given his record with them. It's not just his popularity that took a nosedive.
Posted by Pete North at 17:59