Everybody is wrong about Heathrow expansion 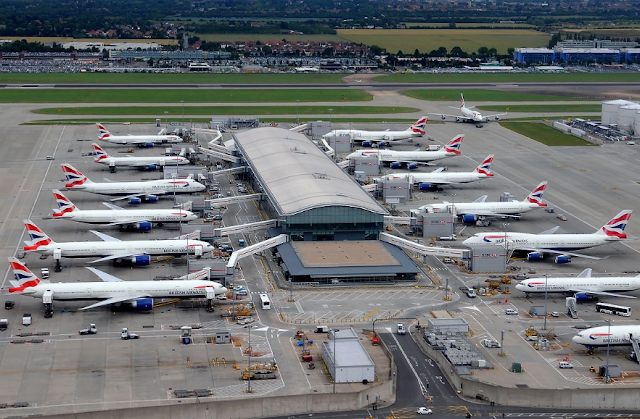 Should it be Heathrow or Gatwick that gets a new runway? Some say both. I say neither. We don't need more London capacity. What we need is a total rethink of our industrial policy. At some point there is a capacity crunch for London not just in terms of physical space for runways but also airspace. It's not as simple as just kicking the Chinooks out of RAF Odiham and building a rail link to Waterloo. Of course technological improvements and scheduling innovations can keep adding capacity somehow, and we can find always ways to squeeze in more traffic if we want to, but that's the real question. Do we really want to?

London has pressures on traffic, housing, pollution, water, public transport and sewerage. If we add more runways we need even more of everything. This makes no sense.

At present, London is a black hole that keeps on sucking the talent and vibrancy out of our other great cities. We have a political establishment so entrenched in SW1 thinking they are barely able to acknowledge the existence of anything outside London and consequently London gets what London asks for. This is madness.

Further expansion of Heathrow leads to more agglomeration of people and businesses. Heathrow is the place to be if you want to export by air. That means the jobs will concentrate there and so will the need for more housing and land, which is already prohibitively expensive.

Pretty soon we find after we've procrastinated over building a new runway and we build one several years late, we find we're having the same tired debate about building the next one. If it's politically difficult now, then more expansion in 2030 will prove near impossible. So why not think outside the box?

We're short on housing in the UK and land near London is expensive. But one thing the UK is not short of is airfields. We have several regional airports running under capacity and we have dozens of easily restored RAF bases. We should use them. Critics would point out that in the main they are miles from anywhere, but then speaking as a Northerner, so is London. It's three hours from Bradford, six hours from Cornwall and five hours from Scotland.

The Aviation industry knows this. They know that if they can cut costs, they can open up more routes and stimulate more demand. That's why orders for the Airbus A380 "super jumbo" are tailing off. The aircraft requires special terminals and docking modifications whereas large widebody jets can use most facilities at most airports, carry fewer people and are easier to fill. The trend is toward smaller and more frequent services from more locations, flying point to point rather than flying everyone in to a hub for a long haul flight - but London is locked into this bizarre idea that Heathrow is the centre of the universe and that the hub system is the only system.

The one thing any government could usefully do is to create incentives for air traffic to go elsewhere in the UK as a means of regeneration. The HS2 budget alone could achieve this. The chief complaint of some airlines is the business model could not succeed without sufficient demand but again that's one thing the government could stimulate very easily.

The one thing that killed off the seaside resorts was affordable flights to more exotic destinations. Clearly what stimulates demand for travel is price. But while we have made amazing progress in opening up the continent, transatlantic and beyond is still a luxury denied to most. We can solve this.

At the start of 2013 Germany froze its air passenger tax after the German federal Government published a study on the economic effects of the tax, concluding that two million passengers didn’t travel in 2011 due to the higher air fares. Imagine what we could do if we cut it completely from non-Heathrow airports along with reductions in fuel duty?

Moreover, the viability would impove by improving domestic links. It would increase footfall through airports. When a train ticket from Bristol to Leeds is now £110, taking three hours or more, there is clear scope for developing new air links to compete with or even replace rail. Why is it I can get from Bristol to Amsterdam in one hours by air but it takes four hours to make a trip to Dundee?

Come to think of it, since the government is so keen on garden cities, why not build them next to former RAF bases and use the runways? We could even get Uber to run it all. In many instances the proximity of airports to cities is the sticking point for intercity air travel. Bristol airport is nowhere near Bristol and the same can be said of Leeds. We need airports where we live. London has a city airport. Why not Bristol? Oh hang on! We had one. We sold that off for housing.

Now I know aviation specialists will say "it's more complex than that" and indeed it is - but what we find is the government consulting the airline industry on what it wants rather than what the people want and what the country needs. And what the country needs more than anything is a regeneration of the North. And by that don't mean a couple of new motorways. The Leeds-Sheffield-Manchester triangle has every change of competing with London if only it were allowed to.

Without an intelligent integrated strategy for reviving the North we will continue to see a slow bleed of talent to London. The lack of culture and opportunity will be the push factor, the expansion of London will be the pull. We risk turning Liverpool and Newcastle into our own Detroits.

London's choke points should be London's own deterrent, but we can sweeten the deal by opening up the skies and perhaps ditching the the idea of blowing huge sums on trainsets that won't bring down travel costs unless heavily subsidised. Of all the underused assets in the UK our sky is perhaps the most obvious. It is the key to unlocking the potential of the North.

Sadly, it's not going to happen. Not until our politicians stop obsessing about London. Until it does, the Heathrow expansion issue should be viewed as as a London problem for London people. It's difficult to see how it benefits the people of Liverpool or Hull. As far as we're concerned, London might as well be another country. You can't even fly there.
Posted by Pete North at 19:43