Win or lose in Thanet, Ukip is dead either way 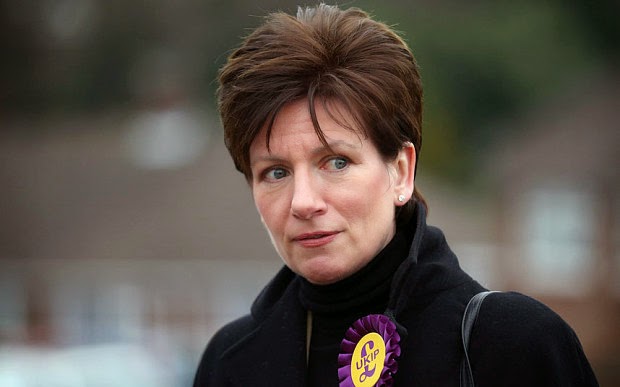 Nigel Farage’s lieutenants are “waiting” to replace him if he steps down, a Ukip MEP has said, as a poll suggests he is on course for defeat at the General Election. Diane James acknowledged that Mr Farage risks losing the South Thanet contest, and used a radio interview to speculate about his potential successors.

Mr Farage is one point behind the Tories in South Thanet, and just one point ahead of Labour, according to a ComRes poll commissioned by Aaron Banks, the Ukip donor. It suggests Ukip has shed nine points in a month, with Labour gaining ten and the Conservatives gaining four. Mr Farage has pledged to step down as leader if fails to win a seat, saying it would be untenable for him to lead the clutch of MPs he wants from outside Parliament.

An email sent to young party members last night warned that the "longevity" of Ukip depends on winning the seat - underming Mr Farage's claims that the party is not a "one man band." Asked about the poll, Mrs James told BBC Radio 5 Live’s John Pienaar show: “Nigel stated categorically a few weeks ago that if he were not elected to the House of Commons, he would stand down. That’s a fact. He has made that statement. She denied that his exit would be a set-back for the movement.“We have a very high calibre of individuals within Ukip. They are frequently on the BBC and other media outlets: Suzanne Evans, Patrick O’Flynn, Paul Nuttall. There are people there waiting.

Of course Diane James has to say that. But this blog is not shy in saying those are not high calibre people. Patrick O'Flynn is out straight away. If you want to know why, go to Youtube and look at him and listen to him. Case closed. Paul Nuttall though is thuggy. In any serious debate he'll lose. His demeanour is sneering, confrontational and aggressive. He cannot broaden Ukip's appeal nor can he hold the party together.

As to Suzanne Evans, this blog has been rather unkind in calling her "thick as pigshit". That's less a personal opinion as a matter of fact. She has the outward appearance of intelligence and an accent that can sell it, but old Grandma Death is getting a bit senile and doesn't remember what she has said to whom so she'll be chasing her own tail in no time. She's presentable but her understanding of the issues is even more shallow than Farage's. Many won't believe me when I say that, but watch closely enough and it will soon become apparent that she's out of her depth. More to the point, her judgement will be in question.

It's not just a matter of kicking Farage out, but also his apparatchiks and appointees who will be a great deal more difficult to get rid of, assuming she has the wit to get rid of them. The young staffers on the make with no experience will have to go too. More problematic is the band of halfwit MEPs who should be kicked out but can't be. I'm not sure if anyone has what it takes to make that bunch look credible. Certainly not Evans. She will also be the object of ridicule when certain photos come to light.

Ironically, the only one I credit with any real intelligence is Diane James herself but she has ruled herself out and would be unsuitable in any case. Ukip members will reject an intelligent nuanced approach and that rules out Carswell too. It is so invested in blaming the EU for immigration that it cannot now turn tail and opt for a phased EU exit or a moderate tone on immigration. None of these people have the skill, discipline and intellect it takes, and while they have the ego of Farage they do not have his persona. The leadership battle alone will show their true colours.

But supposing Farage wins. What you then have is a hugely unpopular individual maintaining his grasp on the party with a mandate to make it even worse, having his strategy seemingly validated which will encourage him to go further up the cul-de-sac unchecked. Ukip needs to expand the appeal not narrow it and Farage cannot do that. He'll be a one term wonder and end up a Gallowayesque figure of national ridicule - and won't be able to work with Carswell.

Without a mass purge of the cancer at the top of Ukip it simply cannot survive. But that is not going to happen - so Ukip is dead. It will chug along in name only paying the wages of their staff and it might well keep returning MEPs giving the likes of Matthew Goodwin a career as a pundit, but as a force for change, the dream is over. One day somebody might just unite all the disparate factions in British politics, but it won't be Farage and it won't be Ukip.
Posted by Pete North at 07:12