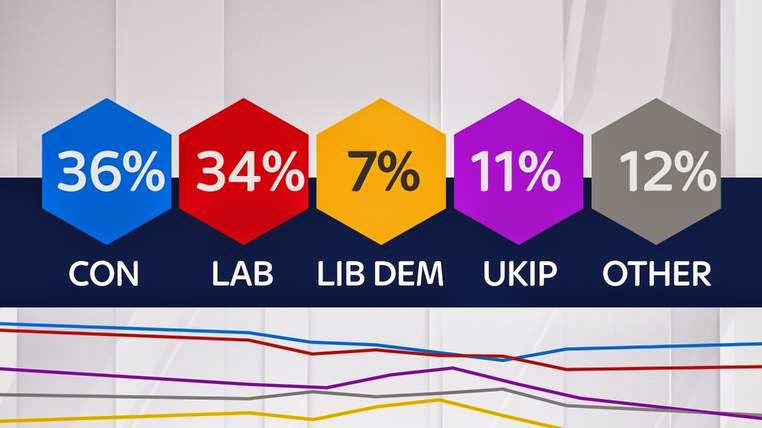 This blog predicted that this election would turn into a two horse race and that Mark Reckless was certain to lose his seat. The latest Opinium poll has Ukip reaching a two year low. Cherry-picking poll readings is one thing, but this is in line with the trend and my spidey sense tells me it's about right. Farage is worn out, the campaign looks shabby and from the direction of the dog whistles, we know Ukip has given up trying to reach beyond its base - a base which seems not to include all the people who made Ukip what it is. To all intents and purposes, it is now the BNP. It occupies that vacuum in the electoral continuum and from that there is no return.

Adding to Ukip's woes we learn from the Mail that new figures confirm Mark Reckless will lose his seat as predicted. A senior Ukip source said: ‘It is not looking easy for Mark, but we are hopeful the figures are misleading.’ However, another source added: ‘We aren’t that bothered because Reckless isn’t particularly popular’.

This will not be news to readers of this blog - or in fact anyone with their finger vaguely on the pulse. Frankly, I don't know how anyone could have thought otherwise. But we were told by Professor Matthew Goodwin that the win in Rochester was conclusive proof that Ukip could make a breakthrough. Yet here we see Ukip unable to stand on its own two feet without the circus of a by-election.

It was always going to be the case that Reckless suffered as funds were diverted elsewhere. Reckless's fate was sealed some months ago having made some unguarded remarks about deportation. Meanwhile, rumour has it that Ukip is broke and because it is make or break for Farage, that's where the money is going and the Northern branches aren't very happy about it.

In the final analysis it looks like all the mainstream media punditry will prove to be worthless and poor old Matthew Goodwin will be left standing naked. For some time now, this blog has been in a holding pattern watching it all unfold on cue and there is little to add apart from "I told you so".

Ukip has been a masterclass in how not to run an insurgent campaign and very little has been of any great surprise. All that's left to come is the actual voting ritual itself and the bitter recriminations about media bias and how the liberal establishment slew it's dragon. In a desperate pitch to reclaim their credibility we will see a torrent articles from the likes of Goodwin blaming just about anything but Ukip and Farage - followed by tantrums about First Past The Post. With that will come a deluge of half-baked ideas about democratic reform, all of which miss the point.

This blog has always said Ukip will change the order of losers and that is what Matthew Goodwin will cling to in that his numbers will show marginal second places and a few healthy third places, but in the FPTP system there are no prizes for second place, and while this will suggest to Goodwin that Ukip has a future, the lack of actual wins will be proof that it doesn't. Goodwin has been jerking Ukip off for many months and this is the premature disgorgement.

Many argue that the loss of the Scottish Referendum is behind the SNP surge and the same will likely happen to Ukip following an EU referendum. It won't. Ukip is toxic beyond repair, there is no-one to replace Farage, there is no intellectual platform, and the core vote is too concentrated. Far from shaking off the image of loonies, fruitcakes and closet racists, the only material difference now is that the racism is out of the closet, wearing a pink tutu and singing Elton John songs. Cameron has shot the eurosceptic fox and the immigration issue will go dead once again. More to the point, Ukip is not the SNP. The SNP is a party on a mission. Ukip is a cult without direction. It looks like the "left behind" will be left behind a good while longer.
Posted by Pete North at 05:40