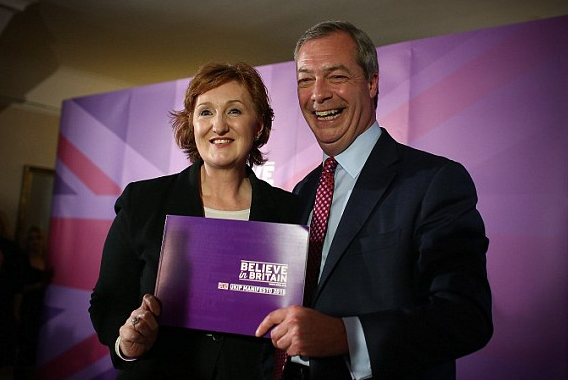 Having spent a year deconstructing Ukip, I can't not pass comment on the release of the manifesto today. From the Twitter reaction and media response I think it's fair to assume it's the usual rag bag of disjointed aspirations. But at this stage in the game, who cares  if it isn't. The time to establish Ukip's intellectual credibility was back in 2013. Anything sensible now just likes how your school homework used to look when you copied it from the smart kid in your lunch hour to save you a bollocking.

In respect of fisking it, I very much doubt there's anything I could add that the whole media isn't already piling on, save to say the only party that wants to take us out of the EU still has not drafted a substantial Brexit policy.

Still it's all jolly good entertainment for The Telegraph who for much of the day has devoted all three comment slots to Ukip. Graeme Archer devotes his column inches to the idea that he himself should be persuaded by Ukip but isn't due to the toxic message of Ukip, but remarks how Ukip have changed their tone today.


The purple party have decided, I imagine, that banging on about immigration has reached its upper limit of (ugh) utility. Perhaps they’ve realised, too, that since their policy changes according to the spokesman asked about it, or how much alcohol that spokesman had consumed at the time of asking, it might be as well to keep quiet on the immigration front. One Ukip spokesman, helpfully ensconced in a pub, told me: “The problem is, even within my own party, my own deputy chairman didn’t seem to understand it herself despite the fact I actually put picture graphs, I put the numbers on and the point is people confuse immigration."

So having tickled the tummy of the anti-immigrant dog, Ukip is changing focus, and now presents itself as the party for those who love our armed forces. It’s not un-clever. Because which Conservative would complain about prioritising veterans of the services when it comes to housing, health, or jobs?

Essentially having toxified their own brand with immigration they've decided upon blowing the veterans dog whistle instead. It may slow the rate of decline, but probably not, since it doesn't reach into any new constituencies and is blatantly motherhood and apple pie stuff which Ukip already does a good line in. It's nothing to write home about.

But as much as the Ukip manifesto has been the circus event of the day, a new poll suggests that the Tories are set to win fourteen seats in Lib Dem constituencies. That puts the Tories in reach of a workable majority. Perversely this news could galvanise a Lib Dem vote at the last minute. We don't know, but it would be foolish to write the Lib Dems off.

Meanwhile, one almost feels sorry for poor old Professor Goodwin trying to salvage his reputation in the Telegraph.


It is tempting to think that party manifestos do not matter. Our political debate often seems to be guided by a 24-hour news cycle of soundbites and carefully-managed photo opportunities, while few voters have the time or inclination to sit down and read lengthy documents about policy.

But manifestos are important. They set out the lines that divide our parties and through their headline messages they throw light on how the different parties view our society –who they want to help, what issues they think are important, and how they want to change the way that we are governed.

Course he's right for once in that manifestos very much DO matter in that they are the source that opinion formers go to. They are the people with influence you need to impress. They do shine a torch on the soul of a party. That is why Ukip needed one many many months ago to offset the stupidity of their candidates and as an insurance policy against their leaders misspeaking. A movement without a sound intellectual base cannot succeed and cannot manage a message without it. Farage was arrogant in believing he could wing it and expect the wheels not to fall off.

The problem with Ukip's policies is they are the product of received wisdom, many of which can and have been justified - just not by Ukip - and because Kippers don't fully understand the rationale for their polcies it is assumed their motives are much less sophisticated than they actually are. For instance, you could make a very strong meritocratic case against equality laws - but that argument would not be forthcoming from Ukip.

Goodwin has it that "It is a world where cold economic calculations come a distant second behind intense feelings of anxiety over cultural loss and abandonment - where voters are more likely to trust their instincts over a spokesman from the the Institute for Fiscal Studies. They might not even be able to tell you what is wrong - they just know that something is. So long as Farage and his party are articulating that sense of loss and threat - from their calls to control immigration to the scrapping of hospital car park charges - the reality is that they will always find a receptive audience among a significant section of the population".

But aside from Goodwin's déformation professionnelle, there is also an underlying snobbery to the man where he seems to think that if Ukip keeps blowing on populist dog whistles that dogs will come running. As much as this ignores the deep tribal loyalties, it also ignores a certain public instinct which transcends the emotive - and that is what explains the sudden reversion to a two horse race - something Goodwin was not banking on while he was predicting big wins for Ukip. With two polls now showing a significant slide, Goodwin's credibility is totally spent. Why the Telegraph would give him house room I don't know, since this was all predictable and indeed predicted on this very blog.

That said, it's unfair to pick on Goodwin alone. Most of the bozos at the Telegraph and the Spectator and all points between have got it massively wrong. You might say it's too soon to call it, and while I'm still leaving room to be surprised by the fates of other parties, the word is out that Ukip is a party of pathological losers - and however good their manifesto may be, no party is coming back from that. Not now. Not ever.

This of course does not stop the Guardian and others casting an eye on Suzanne Evans and wondering if they're looking at the next leader and whether she can revive Ukip's fortunes. Let me save you the bother. She can't. She's not very bright and the more exposure she gets, the more it will become apparent. More to the point, she doesn't see the inherent issues at the heart of Ukip and so she's about as likely to listen to criticism as Farage was. As for policy, they can change their spots all they like but their approach to policy will not - and you know what they say about trying the same thing over and over and expecting different results.

This will not stop the whole media circus playing to a new theme of "can Ukip make a comeback?" and even though Goodwin has been thoroughly discredited, he will maintain his position as court scribe, producing the excrement upon which they will feast. This blog has often remarked that our media is no longer in the business of reporting the news, and that they are now merely an entertainment industry. But when it comes to political analysis, they are children mainly entertaining themselves - peddling their derivative wares without depth or understanding. Meanwhile, there has been one blog that called it right from the very beginning. How d'ya like them "sour grapes"?
Posted by Pete North at 10:59