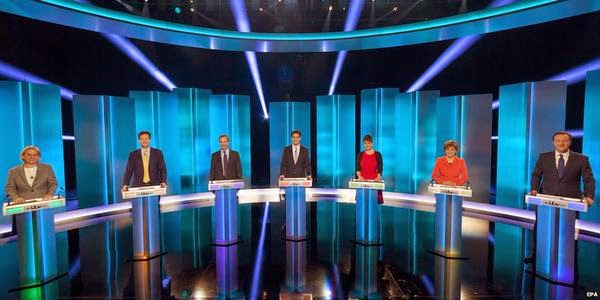 Against my better judgement I tuned into the leader's debate (Who wants to be a totalitarian?). I should have stuck with my earlier plans and watched Spongebob instead. Mainly it was noise.

From a Ukip watcher perspective I thought Farage opened well and gave a glimpse of the Farage he once was. But it didn't last and predictably so. Predictable because the opening rhetoric can be well argued with a solid command of the facts - but that is not Farage's style. What we got from Farage was a progressively poor performance. He was playing to his remaining gallery, banging on about immigration and managed to lose on the matter of the EU. He looks tired, he sounds tired and he's not up to the job. A bad day for Ukip but an even worse day for eurosceptics.

Farage is becoming one of those Action Man dolls where if you pull a string from the back it plays back a catchphrase. One wondered just how many times he was going to run with foreign aid. Here was a chance to set out a positive vision and reframe the debate. That did not happen. Nothing Farage said today is anything we haven't heard already and nothing he said is likely to widen Ukip's appeal. He's a shadow of his former self and he wasn't much to begin with.

But any kind of analysis at this point is fruitless. By this stage in the game anyone of us political anoraks has lost our objectivity. You all know my views on Ukip and Farage and I would say these things wouldn't I? I just have to go with my instinct that most people watching will have seen what I have. Farage is spent.

Natalie Bennett was awful because she is awful, her politics are worse and her grasp on economics is tenuous to put it politely. As to Sturgeon, a snap poll has it that she is the winner of tonight's debate. We can't put too much stock in snap polls but if that is the public mood then it really does refocus minds because most of us on the right are terrified at the prospect of an SNP influence in government, making Cameron the only rational choice.

As it happens, I think Cameron did put on a good show. As a Twitterer pointed out... the suit never creased. Clegg was his usual plastic man self without a shred of authenticity and so it looks more and more like we will see a two horse race with the SNP as the significant other.

The Miliband message is that Britain is a place of woe, suffering and misery. The left love it. But I don't think things are nearly as bad. And I think most people know that too. I don't know of anyone who can look at Miliband and seriously suggest he is prime-ministerial material. A YouGov poll tonight puts the Tories on 37% which is a clear lead, and snap polls not withstanding, I think the Tories probably won't get a bump, but they will hold that 37% - which is all they need to do. Ukip may get a sympathy bump but it will be over in a week and back down to 12% shortly afterward. It will fall further. We know the game is over when it hits 10%. And it will.

If Cameron is not Prime Minister after 8th of May it will be by sheer accident of numbers. But when it comes to rune-reading, my bullshit opinion is about as valid as yours. It could be my instincts are simply wishful thinking but based on what we've seen, I might just put my money where my mouth is.
Posted by Pete North at 15:10