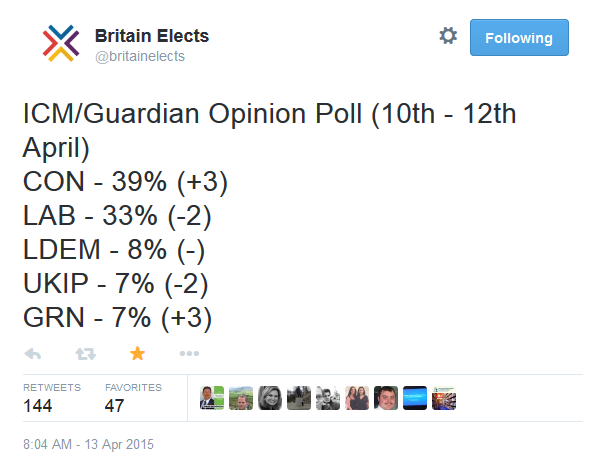 I don't know what you make of this poll but it smells about right to me. The Lib Dems have a well managed campaign and were always likely to recover closer to the election, largely avoiding controversy, and Miliband is now a figure of ridicule. All Cameron has to do is remain as anodyne as possible to take home the crown. As for Ukip tanking, this could be an outlier, but my gut tells me this is actually a true reflection of where Ukip has been for some time. Some polls have Ukip settled on 14%, but I'm certain Ukip is nowhere near it.

This week sees the release of all the party manifestos which probably won't breathe any life onto a pretty flat campaign for all parties. Spin and counter spin is of little interest to anyone apart from those who generate it. By the looks of the Labour manifesto, it's every bit as asinine as Ukip's and I doubt we'll see much more than bribes from the Tories.

At one point I might have waited for the Ukip manifesto with some anticipation just for the entertainment value but whatever's in the Ukip manifesto doesn't matter now. They needed their intellectual assets in place long before now to avoid a car crash campaign - and it could have avoided a great many clashes between their senior spokesmen. Now the mood is one of defeat and lethargy and even the anti-Ukip Twitter clan are twiddling their thumbs. By freak accident the Ukip manifesto could be a masterpiece of modern policymaking and it would not turn the tide. I probably won't even bother fisking it. Though I make no guarantees. Picking the wings off flies is always fun.

There are important matters to be discussed but if you think about it, it's all been said - and nothing in this election has much influence on it. When the dust settles it will be business as usual: an overspending state, a decaying civic sphere along with oppressive and dysfunctional local government. As far as this election goes, it's the closest a political blogger gets to a vacation. Real politics is on hold.
Posted by Pete North at 14:14