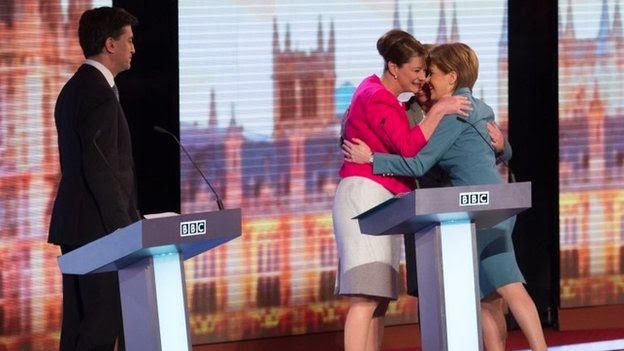 I'm struggling to write blog posts at the moment. I can no more write a political diagnosis any more than you can stomach reading one. If I see any more hackneyed blether about "the Westminster elite" I shall go postal.

As I cast my eye on the nauseating display of smug self-satisfaction among Plaid Cymru, the SNP and the Greens, I almost feel sympathy for Farage. For all the populism of Ukip, as Robert Hardman points out in the Mail, their brand of populism is just as bad. Curiously while the ignorance of Ukip is chastised, the equal and opposite ignorance of the left wing is legitimised and celebrated.

The truth of the matter is that they are all the product of the same political dynamics. They are all born of the same resentment. Ukip can rail at the SNP and the likes but they are part of the same backlash against an increasingly unresponsive government in Westminster.

Their collective crime is that none of them are in any particular rush to explain why it is unresponsive, and none of the parties have come forth with an accurate diagnosis let alone a solution. All we see is more of the same witless tinkering based on only superficial understanding of the issues. For sure, Ukip have identified the EU as a major source of political dysfunction but the problems run much deeper than that. Leaving the EU is only part of the solution, and Brexit doesn't solve the problems Ukip thinks it does.

For instance, the left like to rail at tax avoidance. The debate is framed entirely in parochial terms about "self-serving Tories" but the truth of the matter is that this problem (if you can call it a problem) is a major issue for most countries and has been going on for decades with nobody having any real idea what to do about it. Every lever we pull is connected to something else.
Pull at any thread and things elsewhere start to unravel. Successive governments working in co-operation with other countries have tried and failed to stop it because successfully closing the loopholes has severe economic consequences. Few on the left have the political wisdom or maturity to acknowledge this. Thus the debate is reduced toxic squabbling with both sides talking past each other, both ignoring the actual issues - and blissfully ignorant of what they even are.

Ukip thinks simply pulling out of the EU solves it. It doesn't. Free movement of goods and services cannot properly function without the free movement of people and capital. Even outside of the EU we will still be locked into international treaties and tax avoidance is going to be a permanent feature of that. It's a cost of doing business, but that business is business we all benefit from. What we are seeing is the product of global governance and global trade needs global regulation. The axis of left wing separatist parties would close those loopholes at the expense of everything else. In that respect they are more isolationist than Ukip. This populism born of ignorance is wholly destructive and malevolent. It threatens to tear the country apart.

In truth, the public are out of touch with reality. For all the hyperventilation "the poor" have never been better off. Things are better now than they have ever been and even a job on a zero hours contract is still a job. There is a lot we can do to improve pay and conditions and it is in our interests to do so so that we can dismantle the disgusting notion of in-work benefits, which are in themselves a subsidy of industry. But that requires effective enforcement and that requires effective local government. That's one thing we don't have and that's one thing nobody seems to want to address. Our councillors have no powers to speak of, councils are corporate regional development agencies working to a central policy and the attempts at devolution we see are empty gestures where there is no real transfer of power. The missing element is democracy.

The solution to this is The Harrogate Agenda. I'm struggling to communicate this because critics of it either haven't read it or don't understand it. I am increasingly ignoring their opinions on just about everything now. In fact just about everyone is wrong about everything. At the global level we need our own voice at the top table and so we must leave the EU. At the local level we need sovereign, democratic entities that we control. The EU is wholly incompatible with that. It is because of the stifling regulation all the way through the chain that government at all levels has become paralysed and unresponsive. It is that which is the engine of discontent. From energy policy to agriculture, it is ruining our prospects for growth and it is destroying jobs. The irony is, it has spawned parties like the SNP and Paid Cymru who want more EU not less. Far from unifying Europe, it is fragmenting Europe from Kiev to Aberystwyth.

If we look at the EU it is wholly anti-democratic, and is 100% incompatible with The Harrogate Agenda and so we must leave. But this is why I have previously called Ukip the most malevolent force in British politics. The establishment has just enough support to fend off these grubby little separatist socialists, but Ukip, while a busted flush in the electoral stakes is discrediting euroscepticism and will prove to be the biggest obstacle to leaving. That is why I have put so much effort into destroying it. The left have been my useful idiots and they have made good with the information I have fed to certain influential individuals.

With any luck, Ukip will be out of the picture by the time we have an EU referendum. That is IF we have a referendum. That can only happen if the Tories win and that's why you must hold your nose and vote Conservative. Until we break the EU deadlock, it doesn't matter who is in power and there can be no progress toward democracy and our country will be ripped apart by the likes of Farage and Sturgeon, leaving a shattered Britain, with a bankrupt, socialist authoritarian hell hole North of the border dragging us all down with it. Nobody wants that.
Posted by Pete North at 03:02