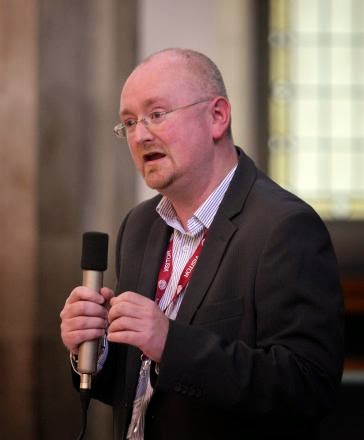 Ukip have declared Bradford South one of their most winnable seats. It is one of the very few constituencies where they have developed a strong local base over many years. They have worked long and hard at it and their local man, Jason Smith, built up a branch from scratch, and even outside the council has made himself a leading contributor to Bradford politics. This makes him more of a threat than most deadbeat candidates. Even without a party banner, Jason Smith would still do well.

Consequently there have been attempts to smear him as a fascist and a racist, which have rightly fallen flat. I have met Jason Smith and can categorically say he is nothing of the kind. He's a Bradford lad and about as good as they get. He's fairly articulate, has an excellent grasp of his party brief and does not flinch from debate. One might say he is the ideal Ukip candidate. He is not mistaken when he says Bradford South is one of their most winnable seats - and that is more to do with Jason Smith than it is to do with Ukip.

If he under-performs in the general election, that will not be on his back. That will be a consequence of the party undermining him at every turn with their continued incompetence. That said, both the Telegraph & Argus and the Daily Record are having a crack at him for a what appears to be a lame come-on or a bit of a friendly banter on Facebook. It's hardly an Fifty Shades of Grey. Smith rightly laughs it off, saying that "we all do it". He said: "If that's the best they can do, it's shocking".

Jason is right, in that we've all done or said something similar, and no man is a stranger to making an ill-judged come-on that has fallen flat. I am not in a position to criticise anyone's online conduct either. Facebook is my Friday night lounge where I'll have a good bit of banter with online friends in the company of a bottle of Talisker. Many are the Saturday mornings where I wake up early with a blistering headache but manage to muster just enough lucidity to delete the more egregious status updates I might later regret. But the fact Ukip is vulnerable in this way is telling.

Despite claims to the contrary, Ukip is not short of a few quid. At this point it should have paid regional agents working full time to protect candidates from these kind of media enquiries, giving candidates advice and support where needed. Any halfway competent agent would point out that in this stage of the game, in the run up to an election, a public and open personal Facebook page is a liability in ways no individual could ever possibly conceive - until such a time as the shit hits the fan.

While I doubt there is anything breathtakingly controversial on Jason Smith's Facebook wall, I expect he is in the minority. Were I a candidate, the media would be having a field day with my social media by now. My attitudes to social welfare make Francis Urquhart look like a simpering leftie.

Like it or not we live in the era of political outrage. The media is jumping the shark with each attempt that falls flat, and some of the anti-Ukip brigade are capable of Ukipist levels of mental contortion to find something offensive. But be that as it may the vultures are circling, trying to sniff out that killer blow. That Smith's Facebook, along with many other prominent Ukipists, is wide open tells us they have no online strategy, no message discipline and a completely ineffectual back office party machine, failing to work in the interests of their candidates.

This is not news to me. It has been said from day one that Ukip would need an effective central office to support candidates and it would need to be a professional outfit, only to be overruled by Nigel Farage who routinely directs party resources to his own campaigns, leaving any halfway competent candidates with their backsides hanging in the breeze. This is precisely what Richard North was saying, it is what Will Gilpin was saying - along with half of the staffers who have since been ejected by Farage.

After twenty years and millions of pounds, Ukip is still the same amateur organisation making the same mistakes with the same vulnerabilities. The Bolter affair wasn't the first or the last scandal and while Jason Smith has little to worry about, it is precisely this lack of professionalism that will bring about the killer blow.

It is no accident that Ukip continues to fail in this way. Nigel Farage is the obstacle in every instance and is letting down every single Ukip candidate badly. Any other party would have had this down by now. There are rules to this here game and ways to avoid own goals but Ukip is still wide open chiefly because of Farage's galactic ego. Farage is spending a lot of party funds appointing his cronies, yes-men and drinking buddies as "media strategists" but there is no evidence the membership are getting their money's worth. Were I a Ukip candidate, I would be asking for my money back.
Posted by Pete North at 00:26