If Ukipists don't get it by now, they never will 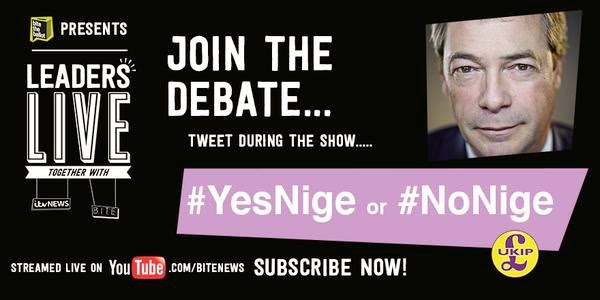 A little while ago I made some unpopular observations abut Ukip. You can see from the comments how Ukipists go into full attack mode rather than engage the points. We're used to that round these parts. The tribe can do no wrong, there isn't a problem and Ukip's leadership know exactly what they're doing and I should shut up and go away.

I really don't envy these poor dears. You can drive yourself to some quite serious mental illness when you're in deep denial about something. Y'see, while your average kipper is thick as two short planks and couldn't possibly comprehend the points I'm making, quite a few of them are not entirely stupid, and having to go on the defensive in light of very real and glaring problems with policy, message discipline and professionalism must cause all kinds of internal discomfort. Having to admit I might just have a teensy-weensy bit of a point must be grating - and quite a bit embarrassing having gone on the attack.

Just to hammer the points home, just this last week we've had Ukipists saying far more embarrassing things than even this weeks "plague" of fake Ukip accounts. And then we've has Ukip's top people speaking at odds with eachother, and now...

Nigel Farage has claimed to have no knowledge of one of the party’s key education policies. Mr Farage said he had “never advocated” a ban on sex and relationship education for primary school-aged children. The policy was announced by Paul Nuttall, the party’s deputy leader, at the Ukip conference in Doncaster in September, to rapturous applause from delegates. Asked about the policy on Bite the Ballot, an ITV youth debate show, Mr Farage said: “I’ve never advocated that policy. If someone in the party in the past did, so be it.”

We have been here before. Not just once have we remarked that Farage doesn't do detail, though rather than rubbishing the entire manifesto, Farage is now ok with simply "whatever we said last time".  Are you telling me this is a serious party?

If you ask me, this is a telling insight into a man who simply doesn't care. A leader who did would have a full command of Ukip's limited "policies". It's not difficult. It doesn't take long.  And if he doesn't know, how can he demand the same of his top people? This is a charlatan abusing his position, enjoying the trappings of the position he has afforded himself, but is taking the party for a ride. The destination is not important to him. Farage can climb off when it suits him and walk away from the wreckage, enriched and unscathed. He is throughout a cynical, lazy man with a talent for manipulation. I am both shocked and dismayed that people I took for intelligent have fallen for it.

Why the corruption and hypocrisy at the heart of Ukip is not glaringly obvious to it's followers escapes me. The party that claims to be anti-politics and against establishment politics is playing pretty much the same establishment games by rigging candidate selection. It's not news to us that it continues, and given what Ukipist candidates actually say you can see why they'd have to, but since this current crop of pre-selected clowns keeps making the same mistakes, you can work out where the problem lies simply by looking at who's doing the hiring.

And these is not "smears". We're just reporting on what Ukip says and does. We're not imagining any of this stuff, and virtually everything we said about Ukip is evidenced on a daily basis. Just keeping pace with Ukip's unforced errors is almost a full time job - yet there is still not a hint of self-awareness from them. Fore sure, it's only media obsessives who notice every such instance, but you'd have to be delusional to think it doesn't have a snowballing effect in the run up to the election and any subsequent referendum.

These are all things said by Mark Wallace of ConHome, James Delingpole of Breitbart, Alistair Heath of CityAM, everybody at the Telegraph and Times, and a growing army of "rejects" from Ukip. Is it all just "mainstream media smears" or do some of these astute individuals have a point? Just what lengths will Ukipists go to in their mental contortions before they admit they have a serious problem and it starts with Nigel Farage? How much more of this slovenly, cavalier incompetence are they prepared to tolerate?

The answer is of course, however much comes, and for as long as it takes to irrecoverably destroy Ukip. That is what it will take for them to wake up and realise they have been taken for fools. Deservedly so, on reflection.
Posted by Pete North at 19:39