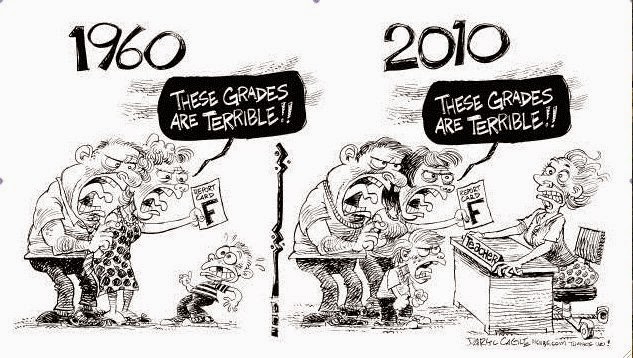 There's a lot of debate this week about grammar schools. It's a wholly redundant debate. No doubt that schools able to select pupils will prosper, but if any school performs well, parents who care enough will do whatever it takes to get their child in. So in fact there is already a large degree of self-selection according to what parents can afford. What this tells us is that schools are only really as good as the parents.

In any deprived area you will find under performing schools, but that's not due to lack of resources or poor teaching. When teachers are faced with poor raw materials, our expectations are too high. Teachers face children sent to school in their pajamas, with parents expecting teachers to dress their children and feed them breakfast. Whatever discipline is put upon the children, it will not be reinforced at home. Thus the kids are overtired from staying up too late, ill-disciplined, disruptive and impossible to teach.

Poor schools are merely a reflection of the selfish, spoiled parent who feels entitled to spawn offspring without investing any of their own time, effort or money in such a venture, with all the expectation in the world that the state can and should do their job for them - and a state that is all too keen to accept such a responsibility despite having now aptitude for it - or moral obligation.

I am of a most peculiar generation. Hardly anyone I know my age is having children or has any intention of doing so. The general feeling is that it costs a lot of a money to do the job right, and doing the job right simply isn't financially possible. Consequently, it is they whop are taxed to pay for those who feel no such fiscal obligation to their children meaning all the wrong people are becoming parents, whose offspring are never exposed to such concepts as self-reliance, discipline and hard work - and such entitlement attitudes are then self-perpetuating.

Put simply, having a child no longer requires any commitment or sacrifice or planning. One can spawn a replica on a whim and a battalion of social workers and state officials are waiting in the wings to ensure parents are ever held to account for their decision to have a child. Having a child is now a lifestyle choice where the financial consequences are anybody's but your own. That we manage even mediocre schools, state run or otherwise in such a climate, is something of a miracle.

Until such a time word gets round that having a child without planning and saving is a life ruining choice, we will continue to incubate yet more feckless non-contributors and we will continue to tax the bejesus out of the people who should have children - to the point where they don't. It's getting to the point now where those who actually want their children to do well but cannot afford private schooling have to resort to homeschooling and supplementary tutoring. Their children out outnumbered by children whose parent don't care and think everything in their lives is the responsibility of someone else to provide.

We will never get a decent education system until we fix the inputs, and that means ruthless welfare cuts, cuts to child benefit, along with massive income tax cuts for married couples. Until then we will continue to churn out sub-literate untermensch incapable of holding down any kind of meaningful employment, and the workforce will continue to need a steady influx of immigrants to prop up the economy. For the moment, even if we have a revival of grammar schools, without serious welfare reform, they'll be selecting from a very shallow gene pool.
Posted by Pete North at 03:29