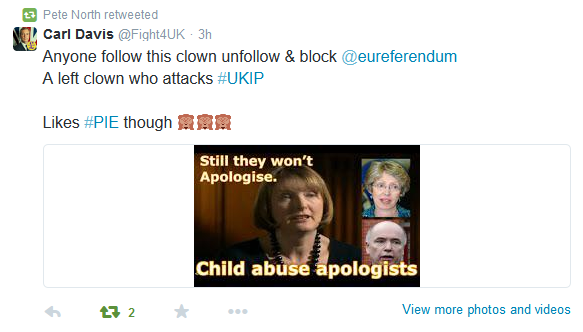 That's right. The UK's most influential eurosceptic website is de facto a lefty child abuse apologist site by way of criticising Ukip. They say a picture paints a thousand words, but I think this really does answer the question of why we can't get through to to them. Inside the twisted mind of a Ukipist, anyone who doesn't support Ukip is a "quisling", "a German spy" and now it seems a paedophile. One can only conclude Ukip is not a party. It is a paranoid delusional fantasy.

I would like to be able to say this was one of the more egregious examples of Ukipism, but this seems to be the emerging norm, and while the language of some Ukipists may be a little more sophisticated, the mindset is absolutely identical. There is no reasoning with them. There can be no debate, and nothing is served by communicating with them. They are lost unto themselves and cannot be helped.

If this is what is allowed to represent euroscepticism then the game is lost already.
Posted by Pete North at 19:14