More of that Ukip professionsalism 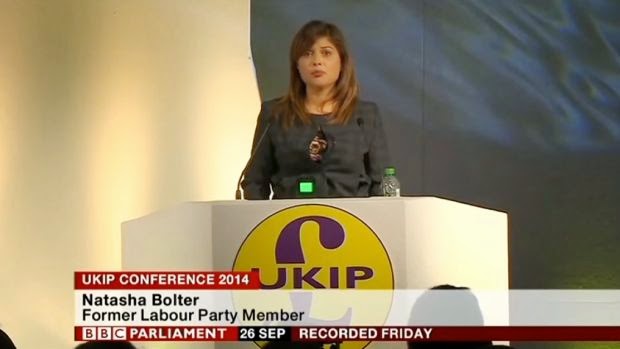 There is little worth saying about the Natasha Bolter affair. She claimed she was a student at Wadham College and graduated with an upper second class degree is philosophy, politics and economics which has afforded her a prominent position in Ukip. But a spokesman for the university said they could find no evidence she had ever been a student there.

A statement said: "We’ve recently seen an interview transcript in which Natasha claimed to have attended Wadham and can therefore confirm that Oxford University has no record of a Natasha Ahmed with a birthday of 12 July 1975 having attended Oxford."

As a commenter at the Guardian notes, it's worth pointing out, amidst all the froth and righteous fury flying around, that the existence of texts and emails from one point in time do not rule out that harassment took place at another point in time. Bolter may or may nor have been upfront about their relationship, but the fact that Bird might have some texts or emails from her (And may even been in a relationship with her) does not mean that all of a sudden sexual harassment could never have taken place. But that's by the by.

One ought to be immediately suspicious of a woman leaving the Labour party for Ukip. That in itself is enough to set alarm bells ringing. Why a left-leaning, supposedly educated, pretty gal would want to join that set of bozos ought to be a matter of intrigue. Though with Ukip lacking any self-awareness, such questions were not asked and no background checks were done before appointing her to a high profile position within the party.

What this speaks to is a rush to grab any tokenistic figleaf so long as it has a pulse. An ethnic minority female is Christmas come early for Ukip. Thus there is a more subtle reverse sexism at work, along with a degree of political correctness, which Ukip claims it doesn't do. You only have to listen to the woman to know that she isn't an Oxford PPE graduate, but like everything else Ukip does, expediency trumps all other concerns. A party wishing to avoid any such embarrassments would have taken a little more care, but using Natasha Bolter for propaganda purposes proved all too irresistible for Ukip.

Farage should know by now that his party is a target for ambitious no-hopers who wouldn't make it in a mainstream party, and it wouldn't be the first time an ethnic minority has attempted to use the party as a platform. In their rush to be seen as non-racist, they have cut corners and this is the result. I expect she is not alone either, and there will be more such instances to come.
Posted by Pete North at 12:19