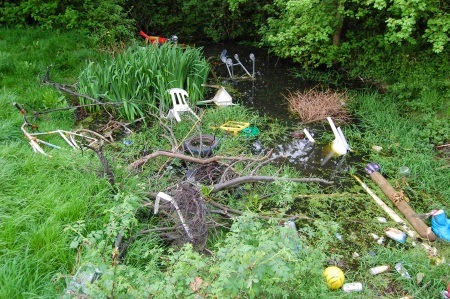 The following comment is by Julian Williams on EU Referendum blog.

This talk of teflon was never correct. Matthew Paris once wrote an article about Tony Blair during his teflon period, the imagery has always remained with me; he likened Blair's New Labour to a pond. If you threw junk into the pond it disappeared, it seemed to everyone that every time you threw more junk into the pond it would disappear. Then one day you threw in an old bicycle and afterwards the handlebars could still be seen, a few sack fulls later nothing big could be hidden in the pond any more. A few weeks after that even the smallest bit of rubbish would not sink into oblivion.

The UKIP Pond has in fact always been rather shallow, it has not taken long for the UKIP pond to be filled. Quite soon even the smallest scandal will stay on the surface. Most people have hated UKIP from the start, The reputation of EU sceptism was always tarnished because for years we were branded a being xenophobic Little Englanders, it took us 15 years to get rid of that image. Farage quite deliberately chose to make xenophobia the raison d'etre for voting UKIP, so our pond was always going to fill up rather easily. Farage has single handedly destroyed the the credibility of the sceptics and already made it impossible for us to win a referendum, whether or not we have one. He is the blessed child and play thing of all EU luvvies.