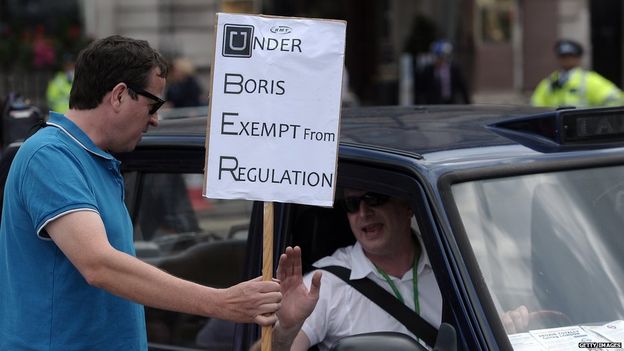 As much as one can and should complain about the price of London taxis and their aversion to going south of the river after midnight, this is very much a problem created by government.

It is after all government who insists on drivers going through intensive training, carrying various licences and insurances, and driving a vehicle that costs twice that of a well spec'd Toyota Avensis. Government has made it impossible for them to run a competitive service - and the outdated fare protection schemes explain why you can't get them to go south of the river.

For them to then have government sit on its hands in response to Uber and tell drivers to be more competitive is a slap in the face. It is councils who rightly insist on a particular type of vehicle, accessible to the disabled that conform to a series of public service requirements, and for traffic reasons alone, the system must be well regulated.

Were it not regulated you'd have so many drivers clogging up the roads fishing for fares that nothing would get done, making the returns so slight that the London cab system would collapse in entirety. It wouldn't take long after an incidence of rape for people to start demanding registration. Meanwhile road space is at a premium in London. The only way to manage scarcity, or at least the best way, is through price mechanisms.

When London streets are clogged with cars there is little value or merit in hailing any kind of cab. The simple fact is that London is a space with multiple demands upon it thus it does need regulating and it does need to be managed and planned. Enter Uber which practically overnight throws that all in the bin, driving cabbies out of business to the point where we have a free for all, with those aforementioned diminishing returns - and the result, nobody can ever find a taxi at all - especially not if you're disabled. We have rules as to which kind of licences can accept a hail on the street, but Uber in essence has electronic hailing which unfairly gets round the law.

So this isn't simply a libertarian wet dream of the plucky upstart sparking healthy competition. It uses the letter of the law to defeat the spirit of the law - and the result being that cabbies, with five year loans on £40k vehicles go bust, taking their families down with them. Cabbies have every right to be pissed off and to want something done about Uber.

That does not mean to say there isn't space for Uber, nor is there there any excuse for what French cabbies have been doing this week, tipping and burning Uber cars. It's just that Uber operates in a legal vacuum, and if we want a well managed capital transport system, they will have to toe the line too, lest they find themselves also unable to make a living when the bottom falls out of the market.

So why don't I have much sympathy for cabbies? Well, as much as I resent paying £50 to do a relatively short journey, it is they who have had the collective power to bring it down. The unions are well known for bringing the city to a standstill when they want more pay, but as much as a union exists to protect the interests of workers, it is also there to ensure the continuance of an industry. Do you remember the last city wide taxi strike the last time the registration fees were put up? No. Me either. If anyone could hold the authorities to account for the added costs it's the unions. Where have they been in all this?

The truth however is that Londoners will have to suck it up and stop moaning. London roads are oversubscribed, traffic has persistent and expensive externalities which everybody pays for, financially and in terms of health and well-being. It's your choice to live there - so you necessarily accept that taxis are expensive. If you want a cheap life, move to Bradford.

There is never going to be a free market in London public transport and let's pray there never is. Nothing would work in such a rationed space. We're talking about a city that has gridlock at 3am on a Saturday - a place where drivers are belligerent and selfish. The one useful thing London should have done a long time ago is switch to 24 hour operations on the tubes, and that's what will probably make room in the market for a little competition, but a free market is the last thing we want.

Cabbies are right to want something done about Uber before it comes to the crunch, but before they do, they should demand some reforms and regulatory modernisation in their own shop first. What is inexcusable though is the government's complete abdication of responsibility. This is their mess, inaction is not an option and the consequences will be bad if something is not done soon.
Posted by Pete North at 21:55