Sold down the river 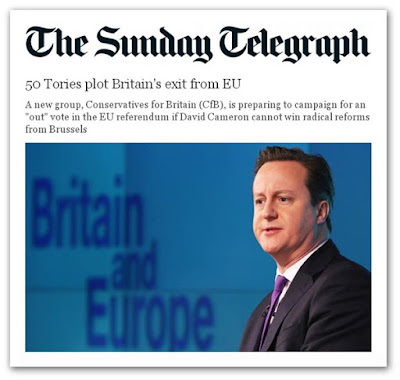 A new group of 50 Conservative MPs and MEPs has been set up, including Owen Paterson and John Redwood, calling themselves Conservatives for Britain (CfB). They have decided they will formally support David Cameron's efforts to negotiate better terms for Britain's EU membership but, if the Prime Minister fails to achieve "truly radical changes", they say they will join the "no" campaign.

So the referendum message from the Tories will be "possibly, maybe, we're not sure yet, we'll let you know just before the vote" and from Ukip we'll get "this is the chance we've been waiting for to slam the doors shut on the Aids infected black people and finally remove equality laws for good". When asked how they will manage Brexit without causing a major recession, their answer shall be "I'll be alright I'm sure. Nigel said so".

Not much of a message is it? The referendum is looking more and more like Ukip vs everybody else. That can't win, and doesn't deserve to. Though this does remind us of the cardinal rule of politics. Never under any circumstances should you trust a Tory nor underestimate their stupidity. I just hope the left wing eurosceptics have got some guns to bring into the fight otherwise the job is totally fucked.

The Tory excuse is that their demands will be impossible to meet thus are setting Cameron up for failure. But they underestimate just how much of a weasel the PM is. He's the one who came home from Brussels and declared he'd used the veto when there was no treaty on the table. This will leave them with only a short time, at the very last minute, to declare their loyalties, and if the group goes with Cameron then the group, as far as the outers are concerned, is defunct as a campaigning vessel.

By this time, Ukip will own the No campaign, making it politically impossible for Tory eurosceptics to be aligned with them due to their toxicity. Farage seems to think he's the second coming and can turn his 4 million votes into the 23 million we need to win. Only a narcissistic fantastist could believe that possible. To Ukip, he's the lord and saviour. To everyone else, he's, well, a complete bell-end. That's why the BBC will have him on the telly every single day.

It's entirely possible that this Tory venture will fall apart quite soon when these idiots realise they just gave themselves a gagging order, but it will show them up for what they are. Party political lackeys who will always do as they're told. I had higher hopes of some in their number but today proves that Tories are every bit as thick as Ukip.
Posted by Pete North at 17:51