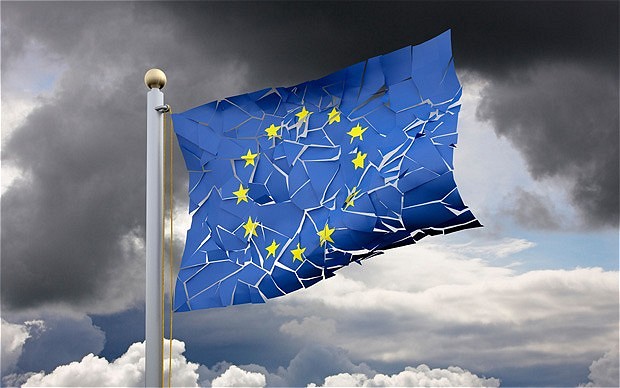 Siemens, KPMG and BAe Systems have all in recent times been in receipt of EU handouts. They have all been embroiled in major fraud and bribery cases. You would no more hire KPMG to do a fiscal transparency audit than you would hire Reinhard Heydrich to do a diversity seminar. You won't be surprised to learn that all of them have come out against Brexit.

The reason being that corporates like uniformity, predictability and zero risk. That is something democracy, real democracy, doesn't offer. Democracies tend to be idiosyncratic, prone to change and inefficient. That is why corporates would go to any lengths to get rid of democracy and replace it with benign managerialism. TTIP was just the ticket to blackmail governments against changing policy out of their favour. It's defeated for now, but it won't stop them trying by the back door. That's how they operate.

It's no coincidence either that corporates have always co-operated fully with some of the vilest and most corrupt regimes on the planet. Dictators can offer them everything democracy cannot. But dictators aren't just whackjobs in ostentatious uniforms in black Mercedes. A dictatorship is any state where the people do not have power - and that can certainly be said about the EU.

More than anything democracy is the ability to say no to government. If put to a referendum scepticism about HS2 would win out, as it would renewable energy vanity projects. That's why it's in the interests of Siemens to make sure we don't have democracy. They can always be found lobbying for more "Europe" because in the main, it's the one government the public can't say no to.

Just this week, Airbus is making more Brexit noises. That's no surprise. They can't seem to make their minds up, but the ever vague promise of quitting the UK is never far from their lips. These are the people who received £10bn in EU funds to develop the vanity A380 project, incidentally an aircraft which would have killed many people had a structural fault not been discovered when a Qantas A380 engine exploded. It is now looking like the aircraft is totally unsuitable for the global market with airlines struggling to fill them, and declining sales suggest like Airbus will never actually recoup the public money they spent on it. We might well wonder if Britain would be better using our money to kickstart our own aerospace industry building aircraft the market actually wants.

As to the mutterings of Moody's and S&P, these are the people facing only modest fines for causing the 2008 financial crisis. Dig into any of these companies and you will find corruption, epic levels of bribery, subsidy fraud and good old fashioned theft. More than that, as much as these companies are crooks, they are also, in most respects, commercial failures who simply wouldn't exist if they didn't have our governments as primary customers. Why then are their words of warning to be heeded? Their interests are not our interests and repeatedly they have shown that their business insights are utterly worthless.

And when you look at the EU, whose own auditors refuse to sign off hundreds of billions in spending, a government which knowingly and fraudulently brought a failed state like Greece into the Euro, you can hazard an educated guess as to why all these corporate parasites are so keen on it - and why they see democracy as such an existential threat.

It is then puzzling why the British left are so keen on the EU, siding with the very worst of the corporate scum. These corporate parasites are the very reason we're cutting back on public services. We've secured their future, but not ours, and yet here they are singing the praises of the ones who let them get away with their corruption, and happily finance more of it. Were the left bought at such a low price with extended maternity leave and marginal rights for agency workers?

These are the banks and service companies who charge us what they like, when they like, bleeding us dry through direct debits and unlawful charges, dragging us through the courts, sending criminal bailiffs to our doors and turning us into second class citizens unless we pay what we're told to pay. If they're the ones who really will jump ship in the event of leaving the EU, then good riddance to bad rubbish!

You might think that's a hell of a gamble to take with the economy, writing off all those jobs at the stroke of a pen, but in truth it's a safe gamble. These people are liars. They said they would leave if we didn't join the Euro. They didn't. They said we wouldn't survive if we didn't join the Euro. We thrived - in spite of them. Nothing these people say or do can be trusted - and when half of them use EU freedom of capital rules to hide their earnings and avoid tax, they have no right to tell us what to do.

The next time you see an empty threat from one of these corporates, Google their name followed by the word "fraud" or "bribery" and take a good look who's talking. The left have some strange bedfellows these days, huh?
Posted by Pete North at 19:37