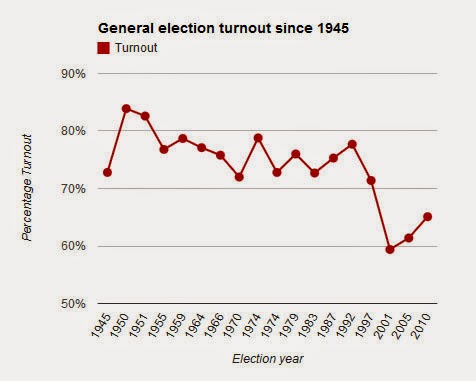 As reported by The Guardian, Ukip have now hinted at a set of policies. Nigel Farage has declared he wants to see a grammar school in every town and cut the top rate of tax to 40p.  One could discuss the various issues therein, but that would be redundant.  If these policies are a taste of what is to come then there is nothing to moisten the undergarments over, unless you're a Ukip tribalist. They will now be busy dreaming up justifications for any utterence made by the tribe - no matter how absurd and at odds with their own politics.

What we are looking at here is essentially more of the same top-down policy tinkering rather than a radical overhaul of government. It offers us nothing but the same small adjustments within the same narrow parameters. Tis nothing but timid accountancy. They are playing it safe, so as not to frighten the horses. Anything beyond playing safe would soon shine a light through the many cracks within their diverse and disparate membership.

What it says is that Ukip has no grand idea to sell. They are just a different set of grubby mits seeking the levers of power. The reality of Ukip does not match the sentiment.  This is still very much establishment politics and business as usual. Another party wanting to pull our stings for reasons they know not why.

If anyone were under the illusion that Ukip were an alternative to mainstream politics, this ought to be enough to finally shatter it. And if not, perhaps the news that Ukip's housing spokesman, Andrew Charalambous (Dr. Evil), has admitted making money from immigrants on housing benefit. An investigation by the Mirror and the GMB union discovered that Mr Charalambous' company, Woodlands Estates Limited, made £745,315 in welfare pay-outs from Haringey Council last year, the largest amount earned by a private landlord.

That's right. Ukip's housing spokesman is a welfare baron who coincidentally wants to scrap the "Bedroom Tax".  No vested interest there at all. There is of course no mention of any of this on the Ukip website, which has not been updated since last Thursday. They are still asleep at the wheel.

For some time I have been predicting that Ukip will slide back into oblivion.  I say so because it has no informing principles that drive its policy making, and it is riding high on a wave of populism rather than a real idea.  If ever it does pick a side and push an idea, it will fragment. Farage knows this, hence why these policy announcements are so pedestrian. It may be that Ukip is with us for a while longer, but the longer it stays in business, the more it becomes that which it set out to replace.  It is leading its followers like lambs to the slaughter.

Insufferable though Ukipists have been since the Euro-elections, it is set to get worse. The Newark by-election will yield strong results for Ukip, feeding the delusion that Ukip is going places.  Roger Helmer was an astute pick for Newark (a Tory safe seat) and they will throw everything they have at this contest. But my money is on this contest being the last hurrah for Ukip - if the Tories play their cards rights.

A strong showing for Ukip at Newark will focus minds sharply.  We will be faced with a narrow contest at the general election where the prospect of Ed Miliband as PM is be realistic. With clear blue water between Labour and the Tories we could see a large surge in turnout to prevent that, especially if an EU referendum is on the table. This would be consistent with turnout trends. Ukip's vote share is then reduced significantly as we see a classic two party squeeze.

To maintain momentum, Ukip will have to broaden its appeal even more in a short time without losing its current base. I don't think this possible. Having run a populist campaign and painted itself as the BNP-lite, I think Ukip has now reached the limits of their appeal. They have had a full public airing and now everybody knows who they are. Opinion is largely polarised and you are either with them or against them. Anyone who was going to vote Ukip already has. With voter segmentation already showing that 17% (or more) Ukip euro-votes likely not going to Ukip in a general election, along with a surge in turnout, it looks like game over for the Cult of Farage.

I have said there may be one or two surprises, but I may even find cause to revise that view over the coming year.  It is after the election that we will see the slow death of Ukip. Having manifestly demonstrated its inability to break into the mainstream voters will begin to switch off, and if Ukip do score any MP's they will be such godawful people they will send people away in droves. All we can hope is that the air-headed pronouncements of Farage in the run up to a referendum to not blow our chances of leaving the EU - which are already slim.

One way or the other, I will just be glad it's over. We may or may not be closer to leaving the EU, but we will have finally put to bed the notion that the present system of "democracy" can produce meaningful change. It will soon be glaringly obvious that our voting rituals are rigged so as to prevent the people from having a voice. While starting and growing a party from nothing to the size of Ukip is a tremendous achievement, in the final analysis, it accomplishes very little. You can't prevent a ship from sinking by changing the captain. We shall have to take power by other means.

That won't be easy. When so many Ukippers have invested heart and soul into their brand and their tribe, and invested so much love in the leader with unquestioning devotion, it will be difficult for them to let go. We can expect them to be aggressive like a cornered rat, holding true to their collective delusion as though it were a lifebelt in a raging storm. Sadly, they will have to learn the hard way that change doesn't come playing establishment games by establishment rules - and there are no shortcuts on the road to freedom.
Posted by Pete North at 08:38