I am the extremism in British politics 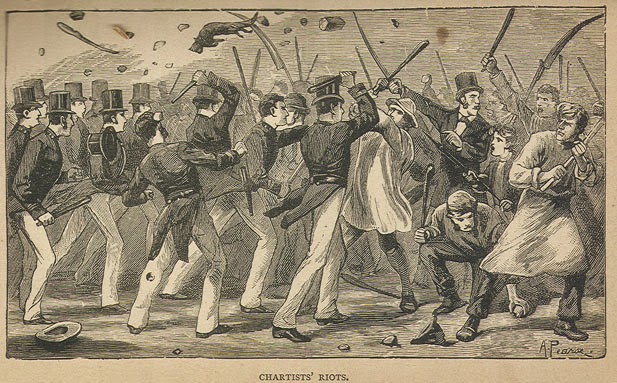 Having attended a Ukip public meeting last night, largely for my own entertainment, I was struck by the fact that if there was a completely unhinged, dangerous extremist in the room then I'm pretty sure it was me. Apparently stringing up the council CEO from a lamp post is not a policy Ukip can officially endorse. A real pity.

Having established that major decisions are made about vital services with none of our elected representatives being consulted, and the influence they have is token in nature; to maintain the outward illusion of democracy, there is no better description of our present system than "kleptocracy".

If there is a penny to be scratched with petty authoritarianism they will take it, and employ violent means to collect it if necessary. There's no question about it. We live in a corporate dictatorship. It is for this reason I often contemplate what it would be like to ransack the council offices, throw the CEO out naked into the street, burn their homes to the ground and cancel their pensions. We can notionally get rid of our councillors but these overpaid town clerks remain in place, sometimes for decades without ever being held to account. These parasites are immune from democracy.

I'm in a minority whenever I suggest this, but there is little in my moral inventory that says we shouldn't. The problem is, as far as dictatorships go, this isn't a bad one so far. Unless they're keeping it well hidden, I have yet to see South Gloucestershire Council using mustard gas to suppress protests and I'm fairly certain there aren't torture chambers in the basement of Kingswood Civic Centre. The cost of living at moment is a concern for most people, but we still have public order, and savvy consumers can still get by to a standard the majority of people on the planet would envy.

Our public services are creaking, but apart from the occasional NHS massacre such as Staffordshire, on a day to day basis they function about as well as you could expect any government run services to function. We don't have raw sewage spilling in the streets, bins are collected (albeit less frequently), we don't have electricity blackouts for days on end, and the roads in the main stay clear of debris.

If there are floods, we have adequate rescue services and deaths in such occurrences are rare. Sure the police are absolutely useless and are more state revenue collectors than keepers of the peace, but if you are in immediate danger, in most instances, the police response is fast and relatively effective. If you're a working, self-sufficient and in good health you have very little contact with any branch of the state unless you work for it. And that's how things should be. I've almost convinced myself  there is not enough to get worked up about that would warrant a pitchforks and torches revolution - especially on a glorious summer day like today.

If we look at British media and what the public get worked up about, and how highly politicised bin collections are, you could be forgiven for thinking that life is good, we are spoiled, and the rest of the world must be looking on with incredulity.

But all is not tea and crumpets on this rainy little island. There is something quite sinister bubbling away beneath.  The changes are slow and incremental so if you weren't paying close attention, you'd not get any real impression there has been a fundamental switch in how we are governed. Things have changed radically, and not for the better.

For Jeremiahs such as myself, it's difficult to be taken seriously. During the financial crisis I was saying that the sky would fall in, public order would collapse, money would become worthless and everyone would lose their jobs. Well, it hasn't happened. The big cataclysm was the dog that didn't bark. I can be forgiven for thinking there was a chance of this, because the then chancellor, Alistair Darling, thought the thing same during the worst of it. But somehow we have muddled through. That is not to say that we are not in deep trouble.

Rather than a crash-bang collapse, we have set upon managed decline, kicking the can down the road each time when it comes to reforming the state. We have heard much talk of cuts and there has been much hyper-ventilation over them, but when you look at the size of budgets and the number of job cuts in the public sector, budgets haven't been trimmed to any level worse than about 1997, when the state was already dangerously bloated, running massive deficits and in a heap of debt.

At the very worst we have only lost sixteen thousand police officers, most of whom were not needed in the first place due to a global fall in crime. There is a gulf between the cuts narrative and the reality. We are seeing restructuring, not cuts.

We have heard much talk about creating greater efficiencies, but somehow, as our services notionally become more efficient, they serve us less well at greater cost, and the more we pay, the less we get.  Somehow our money is being siphoned off. Of course much of it goes toward the public sector pension black hole, affording retirement perks for public sector workers that the rest of us will not get, and the rest of it is being drained by a parasitic executive class. The cost of living crisis is not caused by "austerity" in that the state is still splurging as ever it did. It is the state that makes us all poorer.

Meanwhile, there has been no meaningful reduction in the deficit and there is a whole class of well-to-do public sectoroids whose comfortable lives come at the expense of our own. So much so that the criminally inept former NHS chief had private healthcare in his remuneration package. In short, we are being fleeced, but will still have to face the consequences of not addressing public finances.

As far as the average Joe is concerned income tax and council tax makes up the individual tax burden, but National Insurance is now general taxation, and the whole social security system is now a Ponzi scheme. We are told there will be radical reforms, but these so-called radical reform are little more than timid accountancy, because each government knows that biting the bullet and telling the public they can't have everything for free is not an election winner. But then neither is raising taxes or cutting public sector jobs and pensions.

So instead, we end up with greedy councils and self-financing government departments raiding our wallets by the back door, meaning services we notionally pay for through tax, we pay for twice in fees. Some local authorities collect more in fines and fees than they do in council tax.

Various think-tanks have but the overall individual tax burden somewhere around 46% but if we add what we now pay for which used to be "free", then it's a great deal more than that. Our energy and water bills are of such mind-blowing complexity that we can easily say that half of it is somehow appropriated by government, and if you're a motorist your wallet is being violated like a public school altar boy.

We hear much talk of privatisation, applauded by Tories, but what we are seeing is not marketisation. It is outsourcing and corporatisation of services, affording powers of fines and forfeiture to unaccountable private companies. These fines are being issued on an industrial scale and there is no human influence in the system, and no democratic oversight. All running like clockwork away from the prying eyes of the Freedom of Information Act too.

To avoid messy and complex things like justice creating inefficiencies, the right to a trial by jury is being eroded, and local courts are being closed down, while the police turn into an occupying force. Everywhere the state assumes guilt and ordinary citizens are being criminalised for being poor, and we must watch what we say to our masters to avoid jail.

To the politically disengaged it all looks like modernisation, but in reality it is the progressive abolition of democracy, where the state machine sees us as economic units to be herded and milked as dairy cattle. You are free so long as you remain docile, do not ask and questions and pay what you are told, when you are told to.  Since conformity is in the DNA of the British, very few notice what is going on, but as someone who on principle does not watch what he says, refuses to pay, and asks impertinent questions, I frequently find myself falling foul of the law.

We can shout at our politician if we like. But they are passengers in this the same as us. Some are defenders of the orthodoxy, others are apologists, and a rare few see things as I do. But they are all powerless and can offer us little more than a frustrated shrug. We can vote them out if we like, but what does that achieve?  As Ukip is about to discover, the system is rigged to prevent the people gaining control of their institutions. We are sleepwalking into totalitarianism, under the ever watchful eye of CCTV, with our every transaction recorded, scrutinised and taxed while our basic rights are gradually eroded.

Our voting rituals will not save us, and nor will Ukip. We will have to take matters into our own hands, and we will have to withdraw consent to be governed. We shall have to make them fear us and force them to recognise the sovereignty of the people. The blueprint for this is under development. We are calling it The Harrogate Agenda and we base ourselves on the Chartists. They showed us the way. It is our one opportunity to take back what is ours before we have to take extreme measures.
Posted by Pete North at 00:52