Game over for the Cult of Farage 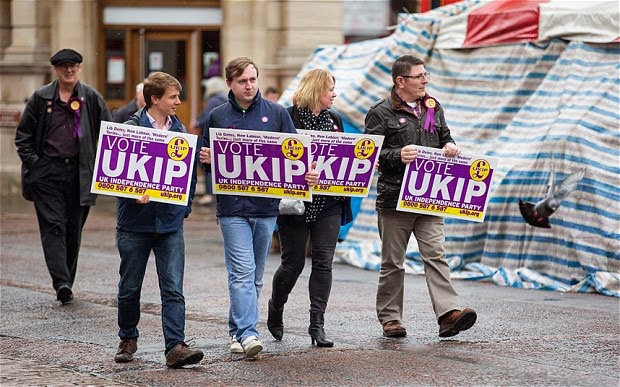 I feel obliged to pass comment on the Newark by-election, though in many respects I there is no need. It's game over.  The tide has been and gone. Newark was a safe Tory seat and by the looks of it still is. Ukip failed. You couldn't really get more typical traditional Tory than Roger Helmer and if any candidate was going to swing it for Ukip, it was he, but this has not happened. And this time around Ukip cannot complain about lack of exposure. They lost fair and square.

Of course that dynamic may have been different were it a marginal seat, but that's just the luck of the draw. That elusive holy grail of a Westminster seat escapes them once more and now the game shifts up a gear.

Ed Miliband has categorically said there will be no EU referendum under a Labour government so the time for playing games is over. There is a clear choice at the ballot box now.  Either you want a referendum or you don't. Thus Ukippers have some soul searching to do. Does their tribe matter more than their country? It is for this reason a great many will hold their noses and vote Tory, and it will be the one thing on offer that will get non-voters out of the house, myself included. This time I do have a dog in the fight. There is an offer of a referendum so I am going to take them up on it.

If the prediction of a surge in turnout holds true, though we will see an improved performance by Ukip on the last general election, it won't be enough to make the difference. Ukip benefits from low turnouts, but the coming election will not be one of those. The next general election will be the first in a generation where the outcome matters and we will see the Lib Dems and Ukip squeezed out.

Having failed to make any significant gains Ukip will be on the retreat. But in any case, if the grail of grails is to leave the EU, a even a strong showing by Ukip is a shot in the foot. At best Ukip will eat into Tory marginals which is wholly counter-productive. They will not be forgiven for putting Miliband into Downing Street and costing us a referendum. Here Ukip should think very carefully about the possibilities if they wish to survive at all.

The task ahead is now to win the debate on leaving the EU, getting a referendum and winning it. That said, even if we win, leaving the EU is only the beginning. It is only a stepping stone on the road to democracy. We will still need a pro-democracy party. If Ukip wants to be that party it has only a short time to act.

If Ukip really does want to play for power, then the next three years should be about consolidation. It needs to go about deciding what it believes in, coming back with a strong set of policies consistent with those beliefs and a genuine alternative to the EU. It then needs a strategy, and the discipline to stick to it, even if that means letting go of a third of its members by committing to a controversial philosophy. Movements need strong ideas, patience and strategy. Flash in the pan populism is a bust and Ukip has proven that.

If we win a referendum and leave the EU, Ukip will need serious answers to serious questions, and if we lose that referendum, we will need to build a new pro-democracy movement - and it has to be more than a generic protest vote. It has to be built on a solid foundation of ideas.

But that is a big if. It all depends on the performance of the exit campaign. We will have to win the argument decisively and have good answers to tough questions. On that score Ukip isn't helpful. The boorish, dogmatic, unpleasant and aggressive behaviour of Ukip activists online is a huge turn off and, like the "CyberNats", they are more liability than asset. The same can be said of Nigel Farage.

If Ukip wants to help win that referendum then getting rid of Farage would be a huge boost. Alex Salmond has come to be the ambassador of the Yes campaign in Scotland and that is why they will lose. That same dynamic may happen in an EU referendum and the last thing we need is showboating prats like Nigel Farage (who don't know what they are talking about) appropriating the campaign for their own egotistical ends.

I have repeatedly observed on this blog that the margin to win an EU referendum is small and it is a referendum us eurosceptics could very well lose. Mistakes we cannot afford and liabilities like Farage we do not need. Debating Nick Clegg is one thing, but debating the nation is another.

Ukip needs to ask tough questions of itself. It cannot hold together as a generic dustbin for protest votes and Farage's appeal has peaked. His conduct in the coming months could well kill Ukip stone dead, and if he doesn't - the lack of ideology and policy will. It's crunch time for Ukip and it needs to get serious. If Ukip won't get serious it should get out of the way and make room for a movement that will.

If we want Britain to be an independent, sovereign, democratic nation, trading freely with the world, then tribal loyalties must come second, and Ukippers need to think hard on how serious they are about leaving the EU. What is more important? A couple of MP's at best, or an EU referendum?
Posted by Pete North at 06:15