Education: too important to leave to educators. 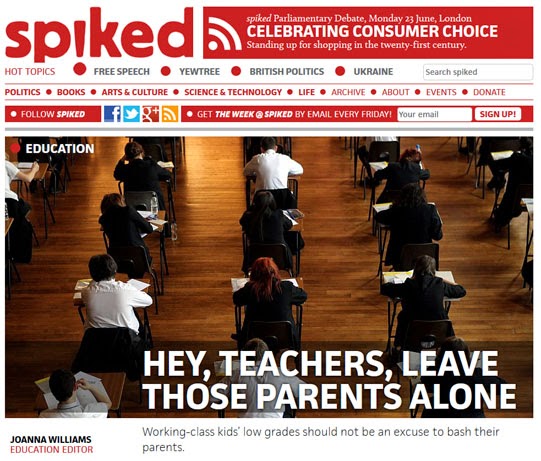 An interesting piece from Spiked today asserts that working-class kids’ low grades should not be an excuse to bash their parents. Joanna Williams examines this phenomenon...


The extent to which white children from poor families are being let down by the British state-education sector was revealed last week with the publication of a parliamentary report, Underachievement in Education by White Working Class Children. The findings show that white children on free school meals (an indicator of economic disadvantage) are ‘consistently the lowest performing group in the country’ with only 32 per cent achieving five or more good GCSEs, compared with 64.5 per cent of white British children not on free school meals. This attainment ‘gap’ is wider for white British children than any other ethnic group.

Williams argues that schools can and should do more and the educational establishment has a natural tendency to blame bad parents. I would not disagree, but that doesn't let parents off the hook. As with all statistics, one must be cautious. Household income is probably not the metric to be looking at. I have seen plenty kids from low income families turn into well rounded, successful people. But I have also known kids from poor backgrounds who ended up on heroin and in jail. The apparent difference to me is how much the parents care.

There is not a lot a teacher can do if a child is not prepared for a day at school - and if we're in the position where an increasing number of parents are not feeding their offspring at breakfast, and in some cases sending their kids to school in pajamas, expecting qualified teachers to dress their children, then there is something deeply amiss.

I have a strong suspicion what lies at the heart of the matter. Williams remarks that "schools are encouraged to interfere in the minutiae of their pupils’ home lives, from bedtimes to diet, at the same time as parents are corralled into engaging with schools". Therein lies the clue. The dead hand of state welfarism.

Teachers I have met have rightly identified that kids are eating crap, have no boundaries imposed on them leading to poor discipline, and are largely left to play X-Box until late in the evenings leaving them with gerbil like attention spans - and not enough quality sleep in order to engage in learning activities. As to schoolwork, there is little interaction where parents are concerned, with parents believing this to be the domain of teachers. Parents are not engaging with their children's education because they have been encouraged not to.

As schools have identified where parents are dropping the ball, they have created provisions to deal with it, such as breakfast clubs, rather than sending the children home and notifying the authorities of neglect. As with the rise of food banks, supply creates its own demand. This then erodes parental responsibility.

The more schools attempt to take over the role of parent, the more parents are happy to abdicate their own responsibilities. The more the state does for parents the less they will do for themselves. Moreover, the state is ever willing to let parents become more dependent, especially evident in Scotland where every child now has a state guardian. Children are becoming the property of the state. This is part of the ever encroaching nanny state, where we all become helpless serfs who need our rulers more than we need them.  It makes us docile, obedient and dependent. For them, what is not to like?

This is part of a gradually growing trend that coincidentally ballooned about the same time as New Labour coming to power, where everyone was defined as living in poverty and in need of state support. We all became clients of the state rather than citizens, and this trend in education is a similar symptom to other parts of public life. But it's all part of the same disease.

The link between low grades and free school meals needs a great deal more scepticism. British definitions of poverty are not set by any pragmatic assessment but rather an NGO and charity influenced definition, which is largely massaged to increase the scale of the problem.  They need large scale poverty to exist and so we have learned helplessness drilled into parents, telling them they qualify as living in poverty.  It is not that they cannot afford school meals. They simply refuse to. I happen to know a lady whose offspring qualify for free school meals. She is on at least 23k a year as a qualified engineer and takes holidays in Barbados. Doesn't sound much like working class poverty to me.

The bottom line is that education will not improve until parents improve, and that won't happen without seriously readdressing the relationship between the public and the state, starting with a massive overhaul of how we define poverty, and cuts to the welfare state as a whole. Parents (and the population as a whole) have ever growing demands of the state, and are all to keen to hand over vital aspects of their personal sovereignty if it means doing less for themselves. The state is determined to assume the role of parent and guardian and we are far too ready to let it.

Meanwhile, schools become ever more strangled by the doctrines of the political education establishment (the blob).  The syllabus is becoming so statistics driven, bogged down with alien nomenclature and procedure, that the joy of learning is beaten out of children years before they come to sit exams. So much so that home-schooling is on the rise among parents of all incomes because they want their children to do well. Home schooling used to be the domain of freaks and weirdos.  Now it is becoming a serious prospect for anyone who cares for the future of their offspring.  Caring parents are voting with their feet and I don't blame them either. Better that than entrust your child's education to this perverse system run by public sector ghouls.

As it stands, if kids do get good grades from a school, it probably has a great deal more to do with parental engagement that it does the school, which in most cases is simply daycare so parents can earn a living. The best teachers are called Mum and Dad and that was always the case. When parents care, the quality of the school is almost incidental. The teaching establishment holds itself in too high a regard and the very nature of the system freezes out exceptional people.

Joanna Williams concludes that "We need to keep parents out of schools and enable teachers to concentrate on providing all pupils with a first-class education. At the same time, let’s also keep the state out of the home and leave parents to get on with parenting."  Interesting that. Williams (who could not be more part of the educational establishment if she tried) would prefer (it seems) to keep schools the exclusive domain of the state. A scary thought. I agree that it's time to keep the state out of the home, but I think it's time the state got out of the classroom too.

One thing I am certain of is that those who work deep in the education establishment should be the last people we consult on education policy. I no more want these people setting education policy than I would have generals dictating our foreign policy.
Posted by Pete North at 10:30