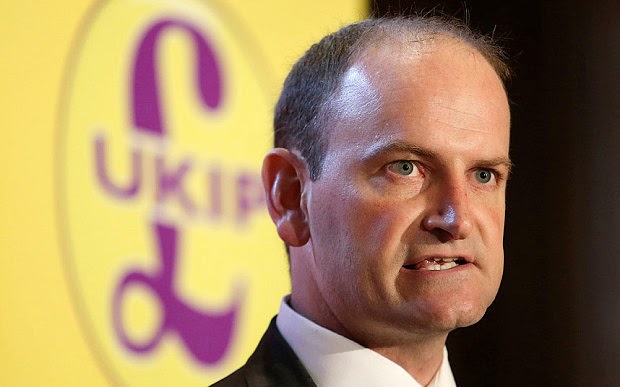 Here is Douglas Carswell in his own words.

I'm joining UKIP not because I am a conservative who hankers after the past. I want change. Things can be better than this. I am an optimist. Britain's a better place than it was when I was born in the early 1970s. We're more open and tolerant. We're, for the most part, more prosperous. More people are free to grow up and live as they want to live than ever before.

As the father of a young daughter, I've come to appreciate what feminism's achieved. Most girls growing up in Britain today will have better life chances than before thanks to greater equality.

There's been a revolution in attitudes towards disabled people. What was once dismissed as "political correctness gone mad", we recognise as good manners. Good. So much about Britain is so much better. Except when it comes to how we do politics.

UKIP is not an angry backlash against the modern world. Modernity has raised our expectations of how things could be.

Has he joined some other inclusive and not at all Islamophobic Ukip that I don't know about? If such a thing existed I might be tempted to join. But you don't have to look much beyond the comments in The Telegraph (a newspaper Carswell writes for) to find shining examples of Ukip bigotry, intolerance and hackneyed, hate-fueled cliches.

Being comments administrator on EUreferendum.com it's always the ones who come on to say that Ukip isn't a xenophobic backward looking parochial party who very often confirm that Ukip is precisely that.

It should be noted that the measures to which Carswell refers that caused the revolution in attitudes towards disabled people are the same ones where people no longer causally refer to people as pakis, darkies and niggers. The fact that Ukippers are busy conflating the Rotherham scandal with Islam tells us that there is still a way to go in educating the public.

We've already had the Islam isn't a race shtick from them, which then precedes a tirade against Islam which would very much be called antisemitism if the word Muslim were exchanged for Jew. While nothing in Ukip's public make up is racist or Islamophobic, it is certainly no coincidence that these people like the smell of Ukip's excremental vapors.

In the main my hostility toward Ukip is directed at Nigel Farage because it is he maneuvered for the BNP vote (and got it) and dragged Ukip into the gutter. Perhaps that will change with Carswell in the mix. Should Carswell keep his seat, then he is de-facto leader from the Commons. I don't see any other heavy hitters in the party, insofar as Carswell could be said to be a heavy hitter

In order for that to happen, Farage will have to shut up and get out of the way. I cannot see him doing that, certainly not while he remains an MEP. Farage will as always be pulling the strings and undermining Carswell at every turn, and a fall out is inevitable. It's what Ukip does best. Then again, it may be that Carswell loses his seat in general election in which case he will then look a bit of a prat.

Unlike Farage, I have no particular dislike of Carswell. Of all the MPs his politics are probably the closest to my own, but I don't think he is leadership material in any way. He's a nice enough guy on the face of it, but he is certainly no savior of the cause. I think Farage has already done too much damage and Carswell has too much baggage.

Carswell outlined his reasons for defecting, preceding each reason with "I came to realise" but if it has taken him since 2005 to realise that the Tory party is an empty shell, with an equally empty leader (for whom he voted), then we're dealing a man who isn't especially bright. His policy proposals are in the right ballpark, but as I have outlined time and again, these measures are the furniture of reform, not part of an architecture as outlined by The Harrogate Agenda.

Few seem to get that tinkering around the edges with electoral procedure is not going to deliver the reform that we need. We need a revolution in our relationship with government and nothing Carswell says really demonstrates that he gets it. Similarly we were told to wait on the great sage, Tim Aker, for a comprehensive package of policies, but again it's looking like a rag bag of tinkering proposals built on the paradigm of rule from the centre. And that is why Ukip is little different from the others, and I can't get too excited.

As to the significance of Carswell's defection, I don't think he will be the first of many as some are speculating, nor do I think very many people have even heard of Carswell. Outside of the bubble his defection is already forgotten. At best it is inconsequential, at worst he might just have blown the only chance we had of getting a referendum and handed power to the Labour party. I think we need change, but that is not the change I had in mind.
Posted by Pete North at 21:20