Westminster has a cancer. 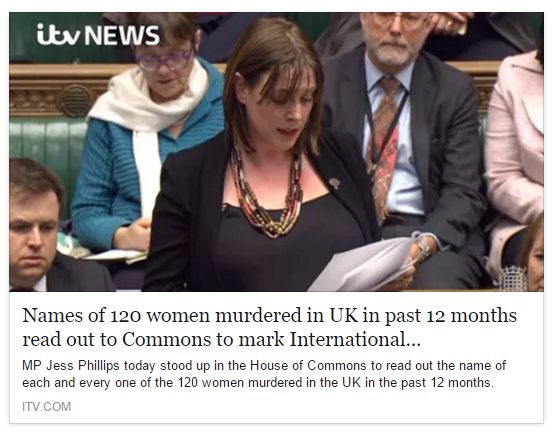 The Jess Phillips creature, arbitrarily reading out names of murdered women in parliament is primarily why I want to leave the EU. A functioning parliament ought not to have the time or the patience to indulge silly, juvenile gesture politicking of this nature - and as an institution it should have the self confidence, gravitas and seriousness to slap it down for what it is: self indulgent, narcissistic virtue signalling.

That we give any of these UN fad days a nanosecond of our time is symptomatic of how debased politics has become and how Westminster as an institution has been utterly, and quite deliberately, hollowed out.

These gestures have the emotional maturity of a hormonal teenager. What sickens me even more is that there are people who would actually go as far as saying this was admirable behaviour. It ought to be contemptible by reflex. We have lost this instinct for democracy and lost touch with what MPs are even for - and as dismal and crass as parliament is now, I fear that it does actually adequately represent what we are as a society.

And if you don't see the EU connection, you really should - because this is what displacement activity looks like. A parliament that was concerned with its own aid, trade, energy and agriculture policy would not have the time to be discussing the contents of children's lunchboxes in a Hartlepool primary school or resorting to behaviour as crass as Jess Phillips. If we still had the instinct for politics, vacuous creatures like these would never even reach selection.

It was always the EU's intent to neuter and hollow out national institutions and this is what it looks like. Jess Phillips and Boris fucking Johnson. And no, there is no argument or excuse. These people are idiotic, parasitic and they are scum. A public that cannot recognise this is equally lost in the morass.

And that is why I maintain that Brexit is not the silver bullet. There is so much damage to undo and damage on this scale will take decades to repair if we want anything approaching an adult government. Leaving the EU is only the statement of intent. But since we are now collectively too bovine to understand what democracy is and why we need it, these losers will likely be the shape of politics to come until nothing functions at all. Idiocracy is now. I just hope I live long enough to see them used for bayonet practice.
Posted by Pete North at 15:20