That moment when you remember the left are depraved 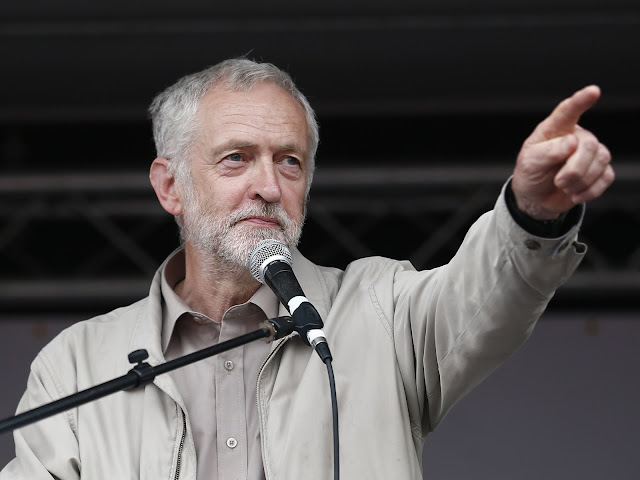 Corbyn - a man who has no problems speaking on a platform with people more than happy to wave the flags of Hamas, Hezbollah, IRA, Communism, or whatever filth the left ascribes to.

And let's not beat around the bush here. Get into a conversation with a leftist and sooner or later they will bring up Israel. I do have opinions on that subject but my default line is that we have more important things to talk about than an ethno-nationalist spat going back more than half a century. But why do they bring it up?

Well it's simple. They are obsessed with it. Nothing else matters to them. It's a perfect cover. They can shroud their flagrant anti-semitism in quasi-legitimate moral outrage - which is always disproportionately directed at Israel, regardless of the fact that both Egypt and Lebanon treat Palestinians equally abysmally.

Not for nothing can you find leftists sharing platforms with Islamists. They ultimately share the same goal.

The reason I have chilled out in recent years is because I no longer seek out debates with leftists and the memory fades as to just how repellent they really are. But thanks to Corbyn they're all coming back out of the woodwork and it all comes flooding back as to what utter pieces of filth they are. This is when I really lose my shit.

And then there is the sheer economic illiteracy. As tweeter Ciarán McGonagle points out, echoing some of my own sentiments, Labour now appear to reside in non-interconnected world where economic policy can be imposed unilaterally without regard to global context, where increasing tax on upwardly mobile corporates and high earners inevitably leads to increased revenues without risk of relocation. Where the City's hegemony is inevitable and can be squeezed for new revenues as though other nations are incapable of competing for business. Where Government can pick and choose which international laws and regulations it deigns to adhere to without losing global influence in making those laws. Where the Govt can nationalise and subsidise industry at a whim without fear of reprisal or economic consequence.

It's a magic wand fairly land where you can peddle "solutions" from 1945 as though the last seventy years didn't happen - and because of the cult like status of Corbyn they will invent absolutely any mental contortion to justify economy wrecking policies. Not forgetting their insistence on foisting this shitty socialist heath system on us.

And this is actually where my heart sinks because apart from the antisemitism and sharing platforms with jew hating terrorists - and giving houseroom to antijewish conspiracy theorists, you can say a lot the same about the Tories. The cowardly drift leftward is ultimately why Britain is in the shit. Time and again conservatives have caved into these scumbags

You know, seriously, so long as you don't mind bringing up vacuous shallow shitbird offspring, if you do have children, raise them as leftists because they will never have to be held to account for the repulsive views they hold, and they will never be expected to act like adults.

They'll be more successful at work because they can effortlessly glide between social scenes spouting the same socially convenient claptrap without being called out on it. Their warped and morally degenerate worldview has somehow become the social currency of the West and conservatives self-censor just to be able to put forth moderately conservative ideas - which are then shrieked down by bunch of leftist harridans.

Worse still is the fucking hypocrisy. The thuggish scum who call themselves "antifascist", only too happy to use violence and subversion to silence opinions they disagree with, using their cultural dominance to have decent people removed from their jobs in academia and public service. And let's not forget their sick "gender is a social construct" bollocks which ultimately lands young people with mental illnesses, often leading to gender reassignment and suicide in later life.

If there is any strand of toxic authoritarianism you can think of you will always finds the left at the front of the queue. The same shitbirds pushing the global warming shit on us as an excuse to close down democracy. Satan is going to have to dig an eighth circle of hell to deal with modern leftists. The worst vermin ever to walk this earth.

This is actually a stark reminder to me that I should step out of my Brexit cave a bit more often because I forgot what shitheads they really are. It reminds me that there is a moral dimension to elections and actually, moronic though the Tories are, two decades of economic oblivion is still preferable to Corbyn and his band of twisted sociopaths. You won't catch me voting Tory but no way can a decent person endorse this depravity. Fuck that. If we further tolerate any of their wickedness then the west does not deserve to survive.
Posted by Pete North at 18:39