My tolerance ends where liberty is threatened 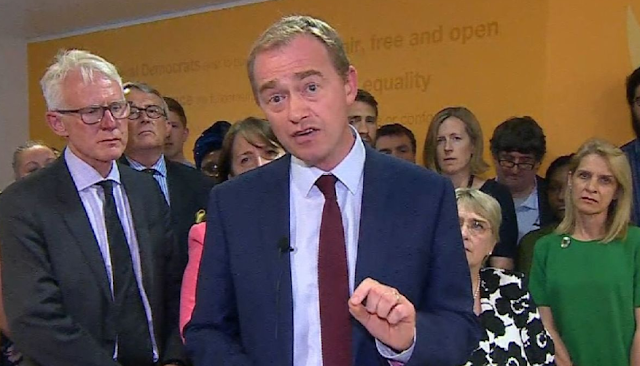 Ok, I can just about stretch to an opinion on Farron. Why has Tim Farron been singled out for being a Christian? Well, he holds illiberal views and led a liberal party. When challenged on it, he was unable to give a straight up answer. For me the latter is the greater sin. If you believe something then come out and say it. It's a basic test of integrity.

But then there is a wider debate here as to how much god bothering do we tolerate? Personally I am a secularist and a social libertarian. I want to see the maximum liberty possible extended to every individual so that they may live out their lives according to their own choices.

Personally I don't get the whole gay marriage thing, I'm a little bit wary of it, but the bottom line is that it does not affect me in any way. Why should my convictions, or lack of them, have any bearing on the choices of others? If Farron is unable to prioritise his politics over his adherence to scripture then he has to stand down. You're either a liberal or you're not.

As to the DUP and the anti-abortionists, it's really up to the people of Northern Ireland to sort that one out for themselves. So long as they don't bring their politics into our politics then fine. This is more a matter of sovereignty.

Personally I don't see why anybody's religious convictions should get to dictate the life choices of women. It's always better of women are free to choose, to be able to get the information and support they need - and safe, dignified treatment. I hate people who would deny a person the right to choose.

So should these people be hounded out of politics? I would have thought so yes. Politics is trial by fire. Stand up for your beliefs. See what flies. Someone of resilience will stick by their convictions and if they can ride it out with intellect and skill then the voters will be the final judge.

It is a tricky one though. Part of tolerance is respect for views you don't like but at what point does that tolerance risk becoming apathy? I think we do have to be on guard against regressive forces who would prioritise their stone age beliefs over the liberty of individuals. They should be held to account for their views and it is vital we are absolutely clear where they stand.

I have a few Christian friends, one of whom I respect immensely, but my general experience of god botherers is that they don't respect the choices of others and use scripture in place of argument. To me that comes over as zealotry bordering on mental illness. Those such people I wouldn't put in charge of a whelk stall let alone a country.

Worse still it seems to me that the Christians I know are the least "Christian" people I know. I was brought up CofE and the general gist I got is that we must be kind to each other, charitable and forgiving. As I understand it, that whole forgiveness thing is a cornerstone of the faith, yet I do not find god botherers either charitable or forgiving. Mainly just judgemental prudes and tyrants without reason.

Ultimately these such people are a direct threat to mine and your liberty. My tolerance ends when the religious convictions of others condemn people and take away their free will. I will defend any person of faith and their right to practice their faith, out of respect for their liberties, but if I catch your dog on my lawn I will shoot it.

As to Farron, I kinda feel sorry for the guy. I don't think he is a bad man. Profoundly wrong perhaps, but really, this country in real terms is secular - and we are better off because people are free to make their own choices. I can't trust that he can shelve his private beliefs simply because men of real conviction cannot.

You can make all the classic arguments about moral permissiveness and where that leads, but ultimately people suffer the consequences of their choices. That's pretty much how it should be lest we go back to treating women like property. In that, it is incumbent upon us to better teach the consequences of certain choices, but anything that flies in the face of free will gets a thumbs down from me. It's not something I have tolerance for.
Posted by Pete North at 16:00