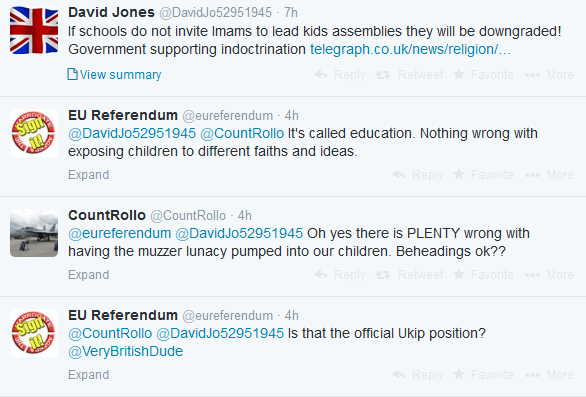 As much as any election is about issues, it's very much influenced by image and personality. More so now than ever. No single policy, act or event defines a party. It's as much about vibe. People vote for the party they identify with. Politics is tribal.

Being that Ukip has a scattergun approach to their message, if you wanted a character reading of Ukip you would have to look at their output, which of late has becoming increasingly brash and vulgar, from their awful colour scheme to the faintly xenophobic billboards to a calypso song released this week. It's pretty naff, but among the Ukip Twitterers this is a political masterstroke.

It remains to be seen whether such jovial shenanigans pay off for Ukip. My bet is that it will in the short term. The Ukipists love it. But on this blog we have explored with reference to the BNP how rank populism has an inherent glass ceiling, and since Ukip have managed to cannibalise the BNP vote and swallow up the "also-rans", I doubt there is much further ground to advance upon. Anyone who was going to turn probably already has. Beyond that, Ukip is a bit of a turn off to the "po-faced" and the middle classes, especially as they contemplate the possibility of Ed Miliband as Prime Minister.

Brits have always had a strong suspicion of populist movements and while Ukip thinks it represents the whole of the working class, outside the Ukip bubble I still encounter many ordinary working class people find them distasteful too. It's a matter of public conduct, and as you can see from the exchange above, Ukippers are clearly not guarded in parading their bigotry.

Of course, mine is but one opinion among many, but I do have a hunch that Ukip is bumping its head on that glass ceiling. Much further down the path of reactionary populism and I can see a lot of the Ukip old guard losing faith in the project. Irrespective of Farage and my own distaste for the man, I believe even I would be questioning the company I was keeping by now. The steady drip of anti-Ukip media (such as last weeks Panorama) may not have any immediate bearing on Ukip's opinion of Ukip, or it's by-election success, but it does have an effect and they are complacent to discount it.

Ukippers are keen to remind me that they now enjoy unprecedented popularity, but popularity alone is not going to win the argument - and they will never be popular enough. The more popular they become as a populist "working class" movement, the more they limit their chances of securing the appeal to force an EU referendum win. But this reality does not intrude.

Ukipists are oblivious to any longer term objectives. In their collective delusion they believe they can win, and they believe any other objective or outcome is secondary to that. Their tribe takes precedence to any immediate political goals, and thus is more like the old politics than they would care to admit. Admittedly, they have succeeded in putting the cat among the pigeons, but if this grubby party continues on it's present trajectory, all it can do is turn off the very people we need to finally leave the EU once and for all.

Our best hope is for Ukip to implode before any referendum campaign kicks off. Euroscepticism urgently needs to decouple from Ukip.
Posted by Pete North at 07:27