The slow death of Ukip 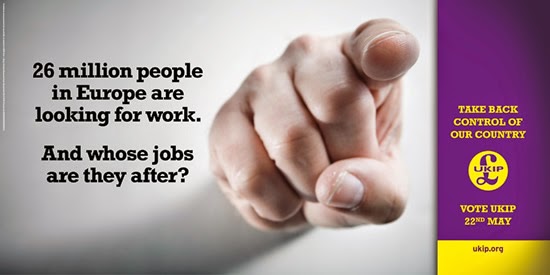 Today marks an inauspicious occasion.  Today is the day that Ukip officially consigned itself to the scrapyard of British politics. Yet again Ukip is making the headlines, not for its ideas or its policies, but in defence of its latest fact-free advertising campaign.

The mainstream political establishment calls these posters racist, which is a somewhat crass accusation, but one could be forgiven for thinking that is the direction of travel for Ukip. While not racist, they certainly pander to a xenophobic tendency, manipulating unfounded fears. In other words, populism and propaganda. Hitherto now, I have never seen such obnoxious advertising from Ukip at a national level, green-lit by the leadership.  This is entirely new.

Farage has made no secret that he is chasing the BNP vote and in so doing has cemented Ukip's position as a populist protest party. He has done this because he knows you can fool some of the people some of the time. It will give him the boost he needs to yield a bumper crop of MEP's. But the problem here is that populism has an inherent glass ceiling. One can capture the whole of the disaffected vote, but it is not enough to win seats in the Commons.

This rapid expansion may look good on paper, but it is now facing more scrutiny than ever before.  Up to press the criticism has largely been directed at their poor public image and their poor choice of candidates, but now there is an election coming up people are starting to ask if Ukip is a credible alternative. It isn't.

For a party that wants to leave the EU, you would expect them to have a detailed and credible exit strategy. It hasn't got one. You would have expected it to have accurately diagnosed what is wrong in British politics and formulated a foundation on which to build policy. It hasn't. So the question is, apart from a loosely defined ambition to quit the EU, what is Ukip for? Ask two activists, you'll get three answers.

The answer to that questions is whatever Nigel Farage says it stands for, depending which way the wind is blowing. The other week he was advocating a civil defence force for floods, last week it was intervention in zero hours contracts. There is no uniting intellectual thread to these policies. These are just knee-jerk, sound-good remarks that fold under scrutiny.

What is laughable is that back in 2005, the reason Tories were deserting Cameron in droves to find shelter in Ukip was because Cameron had abandoned Tory principles and chased floating voters.  Now Farage is doing the same, but in the eyes of the Cult of Farage... he can still do no wrong.

So what we are seeing here is the growth of a cult with similar characteristics to Scientology. Dare to criticise The Great Leader and out come the legal threats. It is a bubble based on the cult of personality built up around Farage. That can only end in failure. The simple test being, what happens after Farage?

Ukip is famous for vicious civil wars that make even Tories blush. Sooner or later, and the rumours circulating suggest sooner, Farage will go. Without his tub-thumping speeches and media persona, what of Ukip survives the civil war? Since it has no intellectual foundation, all they can do is grasp for another leader who will be a shadow of the Farage image. Whatever you may think of him, he is a tough act to follow. Without a stronger leader to marshal the sheep of Ewe-kip, the party has nothing to defend and nothing to rally around either. Not even a manifesto.

Many have now made the case that Farage is an effective leader because he has grown the party, but I dispute this notion. He has expanded his followers. That is all. He has not expanded the debate, he has not expanded the intellectual estate and has not broadened the appeal. Instead he has broadened the appeal of Ukip to a small and narrow constituency. That is not leadership.

The two most notable political failures in the last twenty years have been the Referendum Party and the BNP.  The Referendum Party proved that throwing money at the problem does not build a movement. But nor does populism. The BNP had the right strategy because it was a party built on ideology and specifics and maintained a discipline which meant sustained growth. It failed because ultimately a racist message cannot be sold to the British electorate. But they certainly attracted the attention. Ukip is now attracting that same attention, but rather than the public seeing a message they don't like, it is likely that they will see no message at all. Consequently, once Ukip fails to make a splash in the general election, Ukip will dispense with Farage and the bloodletting will begin. Only then will we see what truly remains of Ukip. Very little by the looks.

Dan Hodges in The Telegraph makes the point that, in a way, Ukip may now be worse than the BNP. The point he makes is a point missed by Ukipites. It is not that Ukip is a racist party. It is that they steal the clothes of the racist party but don't stand by even those convictions. To Farage, it matters not if Ukip is the BNP, so long as it looks like the BNP for the time being. Thus it blunders along, devoid of substance with only short term electoral goals, building a cult rather than a movement. Meanwhile, YouGov polls suggest that the chances of Eurosceptics winning an EU referendum are now sliding.

It is for these reasons I believe today marks the beginning of the end for Ukip. Ukip came to a cross-roads as to whether it was going to be a real movement for change or a dismal populist party with limited appeal and a short shelf-life. It chose the latter. I wish that were a bad thing, but with friends like Ukip, the Eurosceptic movement does not need enemies.
Posted by Pete North at 11:33