The rise and inevitable fall of the Cult of Farage 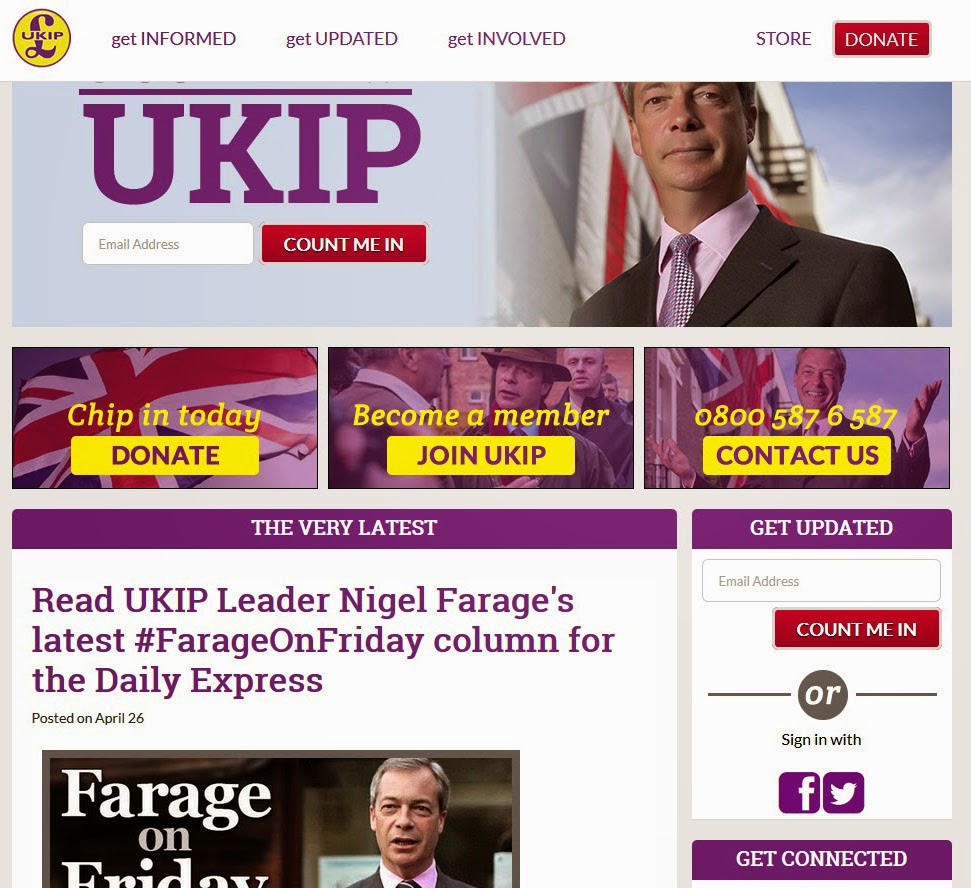 If you wanted to kow what a party or movement was about, you would go to their website. But if you went to the Ukip website, you would be none the wiser.  Nowhere is it immediately evident what the party stands for.  The website features four images of The Great Leader, and as of today, with only five new stories on the feed, only one is directly concerned with issues of national importance.

In fact, today's feed features two articles on making St. Geroge's Day a national holiday.  For a party on record this week saying it has proven it is not just the party of the South East, it has a funny way of showing it.  St. George's day being very much an English concern.

Go anywhere on the website and you will be confronted with a picture of Nigel's mug.  You have to navigate three tiers down in to get to their local manifesto, which is a rag-bag of unrelated vague ambitions that no councillor can deliver on, because councils simply don't have those powers.  Thus Ukip is playing into the myth that local elections are anything other than a voting ritual and an opinion poll on national governments.

The bullet-point manifesto items, some of which are sensible, are not derived from a consistent set of values or a philosophy.  There is no DNA that informs these suggestions box ideas, and their is no strand of consistency that runs through them.  And if there were, I doubt any Ukipite could tell you what it was. Thus we have a populist shopping list.

Ukip is not selling ideas.  Ukip is selling Farage.  Their website is not promoting an idea or an "ism".  It is promoting Nigel Farage (when it is not defending his reputation). And this is why I think Ukip cannot survive.  The question I have repeatedly asked and as yet have had no substantive answers is; what happens to Ukip after Farage?  Ukip doesn't have any intellectual assets or ideas. All it has is Farage's TV presence. That makes it a cult of personality, not a movement - and the rise of Ukip is largely illusory.

Any anti-EU party would make impressive advances at Euro-elections even if it were lead by a chimpanzee.  The anti-EU sentiment is pan-EU this coming election, and is replicated in all of the major member states.  The "rise of Ukip" is more to do with the EU than anything Ukip did.  Similarly EU elections are regarded as unimportant by the electorate and thus are distorted by highly motivated self-selecting minorities - and is aided this time by a collapse of the Lib Dem vote. But a growing fish in a shrinking pond is not necessarily good news. Looking at the poll progression, the anti-EU movement is looking less likely than ever to win an EU referendum.

The rise of the Cult of Farage is not connected to EU referendum voting intentions, and even if the Ukip vote doubles in a general election, there is little likelihood of gaining an MP but for the odd fluke.  For the tribalists of Ukip, this does not matter.  They are not cheering on the anti-EU cause.  They are cheering on their tribe and their leader.  They equate the career progress of Farage with the progress of the cause. Thus, Ukip is becoming a dangerous delusion.

Having wrapped itself in the flag and painted itself as the BNP-lite, it has nowhere to go, and sooner or later Farage's past (or his drinking) will catch up with him.  And then we are looking at a cult without a leader, with no ideas to fall back on.  That will be the death of Ukip and the probable death of any chance we had of leaving the EU any time in the next decade. Sadly the tribalists are too enamoured with their golden boy to see that their Waco moment awaits.

A party built on the meandering of sheep will find that their flock wanders away the moment a more fashionable protest comes along. That's why those who want to see a restoration of democracy are better off with The Harrogate Agenda.
Posted by Pete North at 13:04