No, I won't stop attacking losers 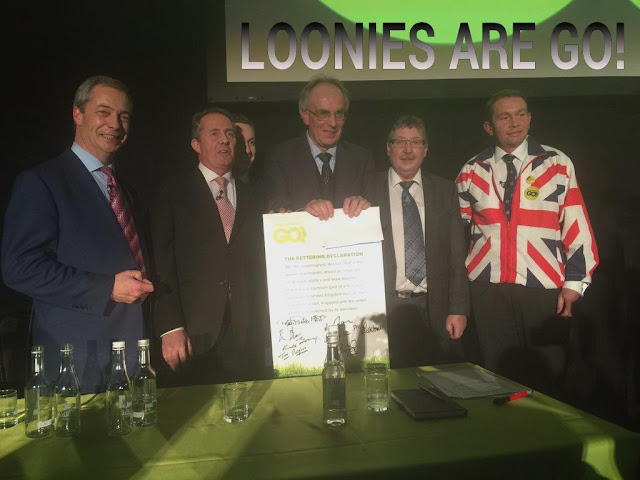 If the above was a political party, would you vote for it? I wouldn't. At the moment, I couldn't be more anti-politics and anti-politician. I am totally fed up with empty-headed posturing know-nothings pontificating over matters in which they hold zero expertise.

While that is true in spades of the Remain camp, whose intellectual big guns thus far are Chuka Ummuna and Karen Brady (I know), I can still find plenty of room to loathe and despise the stupidity on my own side - of which there is an inexhaustible supply.

I'm told I shouldn't do this, but I profoundly disagree. We should never tolerate stupidity in our midst just because we like the flavour of it. That's how we got in this mess to begin with. For me the whole point of leaving the EU is to dismantle the idiocracy that rules over us - and it does not stop at leaving the EU.

Any undecided voter you talk to isn't convinced that we should leave the EU because it is not a democracy because there's not much you could call democratic about our own system. They are right. Every five years you get to vote for one of these mongs who is largely impervious to new information and sees the position of MP as one of authority, whereby they preach to us and make decisions for us - rather than doing as instructed. 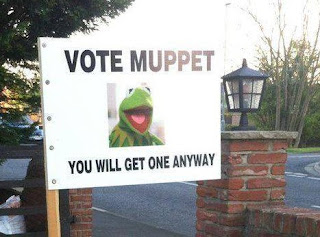 For the five years in between election, you have no say and very little power over how your MP votes. And though you can vote for someone else, that doesn't really make much of a difference, if any at all. For reasons that escape me, we're supposed to be satisfied with this arrangement.

I simply can't support the line that we should "return powers to Westminster" because I don't want those clowns making choices for me either. Just because these mouth-breathers pictured above want to leave the EU doesn't mean I should blithely accept or support whatever crapola leaks from their mouths even if it's conducive to winning (which is categorically isn't).

This is to say that you don't have to identify with these window-lickers to see that there is obvious merit in retaining our vote and veto at the global level and that keeping control over energy and agriculture is a necessary part of self-rule and national security.

And if these things are too important to be delegated to MEPs then MPs can't be trusted with such choices either. We really need to find a wholly different approach to politics that involves a good deal more direct democracy, preferably with as little involvement form politicians as possible.

There have been two Brexit debates going on since the election. There's the debate among London hacks and politicians - and then there's the debate between citizens, which has been more thorough, more honest, more accurate and more up to date. Let's trust the people to sort it all out instead of these oxygen thieves.

Many bizarrely assume that MPs must posses a particular talent in order to climb the greasy pole as far as the house of commons, but the system is somehow broken so that people of extremely low calibre and intellect can now become MPs. (see right)

And then let's not go into Ukip MEP David Coburn saying the UK should leave EU so we can have better toasters. Or rather it's the EU's fault that his toaster doesn't work. And then there's the intellectually subnormal bunch who actually believe David Cameron has secured EU reforms. Morons.

The short of it is, the whole sorry lot of them need to get in the sea. We need out of the EU to first revitalise our politics and secondly to begin the process retiring politics as a profession.

We only need part time politicians to deal with national emergencies. There rest of it can be dealt with locally and through direct democracy. It may not produce more intelligent decisions, but if you're going to have stupid people making decisions, why not cut out the middleman? At least the decisions will be legitimate.