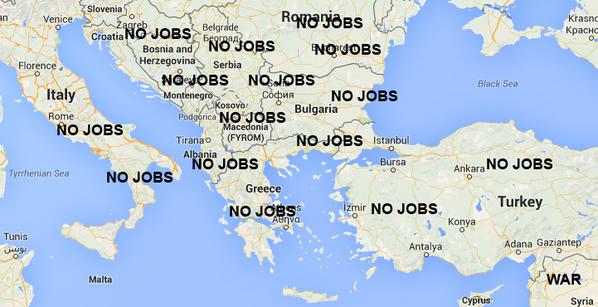 There is a narrative kicking around that the father of the boy washed up on the beach risked drowning just to get new teeth in Canada while supposedly safe in Turkey.

Moreover, while Turkey is a signatory to the 1951 convention and has signed the 1967 protocol, it has entered an "exception" to the geographical extension. Thus, it only recognises refugees from the Council of Europe area. We can apply for asylum in Turkey but Syrians can't.

Legally in Turkey they are not defined as refugees. The guest status means that Syrians do not have rights in Turkey and that the State has the right to make the decision to deport them at any time.

Such a charitable approach rather than a rights based approach also feeds negative public opinion in Turkey towards refugees. Many local people have expressed their discontent with the Turkish government allocating resources to Syrians instead of Turkish citizens who are in need, such as earthquake victims. Some of the words they use to define Syrians include “beggars”, “looters”, and “exploiters”.

Syrian refugees enjoy no right to work and would not be employed even if they did. So they are faced with with the prospect of raising their children in camps or unsafe accommodation, where girls are sucked into prostitution and the young men recruited by militias.

The story about "wanting new teeth" is just a bit of flotsam trivia, taken from an interview with the dead boys distraught aunt. It was a reason, but clearly not the whole of the reason, and to latch on to this and say "it was a lifestyle choice" is cherry-picking and unpleasant. The fact is that this man had an opportunity to raise his son in Canada with family rather than waiting around as a second class citizen in Turkey. He took the chance, as would you.

It should be noted that had the land routes not been closed off by fences there would be no need to attempt a sea crossing. Meanwhile, some have observed the boy had no life jacket. Somehow I doubt the Turkish coast has a branch of Surf Shack for all your maritime safety needs. Moreover, the chances of a toddler surviving even WITH a life jacket, out in the middle of the sea are... none - certainly not without fresh water.

Yes, the father does have some agency in this, but we see a chain of failures of policy that made this possible, not least the stringent anti-money laundering rules that prevent larger sums of money being transferred from Canada and the failure to exert diplomatic pressure on Turkey to accept refugees.

More than that, we only have a partial version of the story, as told through the distorting prism of media and while Turkey is notionally a safe country, were you in his position, you might have a different definition as to what constitutes safety. The asinine and nasty posturing over this is utterly repellent and nobody is deserving of such scorn for the crime of trying to do what's best for his son. Would that men went to such lengths to do the best for their children in this country, perhaps they'd be in decent jobs rather than complaining about immigrants taking theirs.
Posted by Pete North at 00:42