A slumbering dragon is still a dragon. 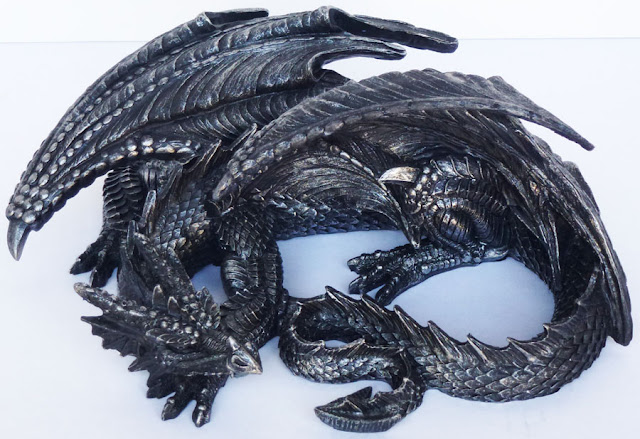 One political meme travelling around academia at the moment is that the vision of the EUs founding fathers has stalled and will never become a reality so it's ok to remain in the EU because there is a different destination of concentric circles bound under a loose alliance. It's actually a convincing argument when you look at the reality on the ground, but it's a piece of creative writing which ultimately ignores the nature of the beast.

The founding fathers were savvy in their design of le grande project. They always knew it could never be done all at once because the central vision would never secure a mandate. Integration by deception has always been the modus operandi. It salami slices powers little by little, so gradually that few ever notice. And you'd never see it unless you know what the game plan is. They were long term thinkers. They knew it would take a generation or so to advance their agenda and they had a roadmap to do it.

It has always used funding of local projects to manufacture consent. It's why you'll find EU logos emblazoned on any nature reserve or community hall or obscure museum out in the shires, to convince the plebs that their benevolent EU guardians cared more for them than the London government. It is why it funds universities too. Every strata of civil society has an injection of EU cash. Education, NGOs, you name it. And it works.

I recently debated Jay Risbridger at Bath Spa University when he made the assertion "our universities are completely dependent on EU funding". It's actually closer to 6% - and UK research wins the grant money because it is good - It is not good because it is funded by the EU. I stopped short of calling him a liar because you're not lying if you actually believe this tosh. This is why europhiles are useful idiots on any given subject.


Whenever you hear a europhile talking about the EU being responsible for our workers rights you are actually listening to a useful idiot. Not only is this notion demonstrably false (and the few tacked on extras are actually damaging to labour rights), you are listening to a messenger of the founding fathers of the EU - who, in their attempts to manufacture a common consent, set about abusing the institutions of civic society to implant a social narrative. What you are actually hearing is a pernicious historical revisionism. And if that smells like a form of creeping fascism to you, then give yourself a gold star and come sit at the front of the class.

The founding fathers always knew a day would come where the legitimacy of the EU would be questioned. And now you see how well their pernicious scheme worked, with the entirely of the civic establishment coming out in favour of remain. They have made idle supplicants of our institutions, robbing them of their vitality, curiosity and dynamism.

And those who speak up about this are often labelled cranks or conspiracy theorists. Except it is a conspiracy and one they published in full. They even founded an academic institution to promote it: "The Robert Schuman Centre for Advanced Studies is an inter-disciplinary research centre at the heart of the European University Institute". The hellmouth of europhile academics and functionaries.

The modus operandi is encoded into all of the treaties and articles of the EU. It is worked into the philosophy of the institutions and it is designed to resist any kind of reform - especially anything which may introduce democracy. There it lies, dormant in the system, but sufficiently restraining in order to prevent deviation from the path.

It may stall, it may go quiet, but the agenda is always there with the noose ever tightening - engineering for irreversibility. That is why the remains make such an issue of how we leave the EU. It was never meant to be easy. It was always a quicksand trap for democracies. The harder you pull away the more it sucks you in.

And so when we hear the ignorant prattle of cosseted and sinecured LSE academics telling us it's safe to stay because the dream is dead, they are speaking from a position of naivety and ignorance. The Ghost of Monnet lives on. The ghoulish servants of the ideal still roam the corridors of Brussels and an infest social media spreading their poison, sewing doubts and rewriting history.

And that's why the EU is not an alliance. It is a power cult. One which believes in the ideal that nations robbed of their resources and democracy lack the ability to go to war - and by this logic the absence of war de facto means peaceful coexistence. It's why they are the enemies of peace and consequently liberty. They are extremists zealots for home no lie is too big and any lie will do so long as you keep believing.

I am not a religious man at all but if I were I would hold the belief that the EU is the work of Satan. It is an evil empire built on a foundation of lies, sustained by ignorance and deception. And to quote that great revolutionary leader, Kyle Reece, "it can't be bargained with. It can't be reasoned with, It doesn't feel pity, or remorse, or fear. And it absolutely will not stop, ever". Do not believe the deceivers. A slumbering dragon is still a dragon.
Posted by Pete North at 14:28