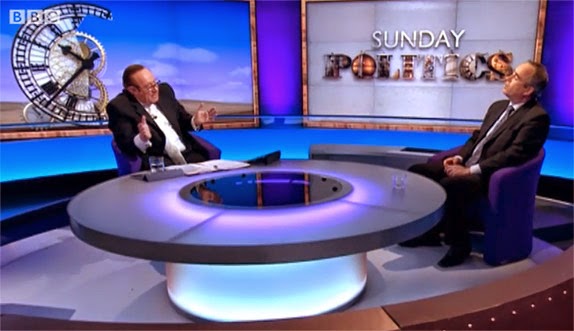 In an interview with Andrew Neil, Simon Darby speculates that the rise of Ukip is a result of a concerted establishment campaign to drive out the BNP from the British political arena. That is not an unrealistic assessment. Andrew Neil rightly points to a collapse in party finances, and consequentially membership, but Darby is not far off the mark either.  It is a combination of both.

It is hardly a co-incidence that for a time recently, not a day went by without Farage appearing on TV or in the newspapers in a broadly sympathetic (or at least less hostile) light. I have remarked on a few occasions that this is not out of fairness to Ukip, rather they are a pawn in a much larger agenda.

Darby notes that Ukip is a loose mix of "crude populism and neo-Thatcherism which will get found out".  He is not wrong about that either. Ukip all but abandoned its "neo-Thatherite" intellectual base and exchanged sustainable growth for rapid expansion by appealing to the BNP vote, capitalising on the wave of publicity afforded it by the media. It worked.

Never one to miss an opportunity to score an own goal, Farage turned his party toward harvesting the BNP vote as he admits today, and now the real "threat to the establishment" party is but a shadow of its former self. The debate is back inside safe parameters, and now the worm turns.

Now the BNP demon is back in the box marked "unclean" there has been a noticeable change in tone against Ukip. It has done its job and is no longer useful to the establishment. For a time, far from being a "threat to the establisment", Ukip was the acceptable face of protest. A safety valve. The protest vote you were allowed to have. But now there is no mileage in Ukip, but for the the likes of Hope Not Hate (who otherwise would have nothing else to do), Ukip will now be ignored and smeared, while Farage walks into every trap set for him, and does their work for them.

So it's a big win for the establishment and a win for Farage, who now goes down as the leader who broke Ukip into the mainstream, and goes off into the sunset having had a long career on the gravy train, and will likely enjoy a nice retirement courtesy of the taxpayer (assuming he doesn't end up in jail for corruption).

The only loser is the Eurosceptic movement.  Once Farage departs he will leave a hollowed out shell of a party, in a bloody civil war, with no foundation to steer its recovery - and it will be lucky to survive the skeletons that fall from the Farage closet.  Having cleared out any natural successors the party is left with talentless yes-men and it is difficult to see how Ukip can survive at all.  Thanks Nige. Thanks a lot
Posted by Pete North at 15:21