A disease of the mind 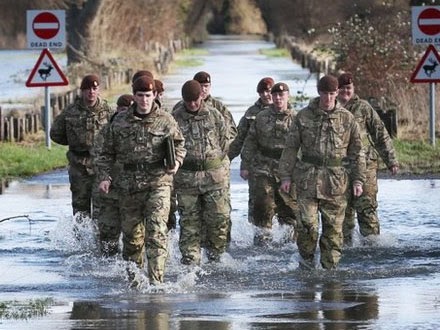 If I said the MoD has lost the plot completely, you would not gasp in surprise or bat so much as an eyelid.  But here is an especially glaring example of the Malthusian dismalist mindset that now infects all branches of government.  Today the MoD suggests the military may have to "abandon flood-prone bases".


"Many of the military’s most important facilities, including RAF Brize Norton, the Royal Navy bases at Plymouth and Portsmouth, and the Ministry of Defence’s headquarters in London, face a "direct impact" from floods by 2020. Defence chiefs must move away from the “Canute syndrome”, a reference to the 11th century English King reputed to have unsuccessfully ordered the sea to retreat, and decide whether to “abandon, manage retreat, or defend robustly” in the case of the most vulnerable sites along the coast."


Now, for those not familiar with defence affairs, the Royal Navy has a great deal to do with ships.  They are large ones, specifically built for the defence of our rainy little island.  Unsurprisingly, this does mean the Royal Navy will have to maintain a number of coastal facilities.  I am not sure how one "manages retreat" with such a specific mission brief.  Perhaps the MoD is suggesting we move the Royal Navy further inland?  You can see the obvious and immediate cost savings there, though it is difficult to see how they can be an effective military deterrent unless China is attempting to assert it's global supremacy over Lake Windermere and to fly the Communist flag proudly over Cumbria.

Further entrenching this absurdity is the notion that Brize Norton should be surrendered to the elements, given that only recently has the entire logistics and refuelling operation of the RAF been relocated there from the now semi-defunct, (recently modernised) RAF Lyneham  - which sits upon a big hill in Wiltshire.

Of course, the lack of joined up thinking is nothing at all new, but here we see yet another symptom of the defeatism and lack of vision that has now spread into the popular narrative: We are but helpless animals, defenceless from the tides and the winds.  We have decided collectively that surviving as a nation costs too much and is unsustainable, and there is little point in maintaining the basics that protect us from the elements.  Staying alive, prosperous and healthy is far too much effort.  The future is bleak for humanity, but looking on the bright side, there's never been a better time to be a British crested spoonbill.
Posted by Pete North at 01:59